Bones review The Master in the Slop 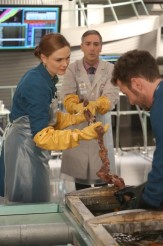 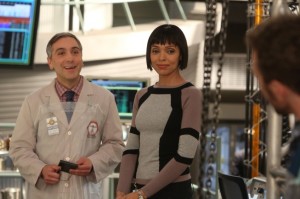 Among the regular characters on BONES, Lance Sweets (played by John Francis Daley) is often the most frustrating. As a psychiatrist who consults with the FBI, his breaches of professional conduct in seasons past are enough to make psych doctors and patients alike want to weep (and call the ethics board). However, in “The Master in the Slop,” Sweets gets to show off his professional and recreational smarts in a way that make him shine, demonstrate that he knows what he’s doing and appear to be within the normal code of conduct.

The “master” of the title refers to deceased chess master Albert Magnusson, brilliant enough at the game to have merchandising tie-ins, but difficult enough to be hated by quite a few people. Suspects include his girlfriend/financial manager Suzanne (Michelle Clunie), his pyromaniac ex-wife (Marina Benedict) and quite a few members of his chess club.

It turns out that Sweets is a former chess prodigy. As such, he asks Booth (David Boreanaz) to take lead on the case. Playing opposite Suzanne’s adult son Tim (Joseph Fuhr), Sweets deduces that the young man is deliberately hiding his own brilliance. Elements of the way Tim plays convince Sweets that this is the murderer. Given rein in the interview room, Sweets applies chess tactics – he finally gets a confession by getting Booth and Brennan (Emily Deschanel) to play along with the lie that Tim’s mother confessed in order to save him. Tim then confesses to save his mother, who is innocent; Tim couldn’t bear sharing her with Magnusson.

Meanwhile, there are two minor flaps at the Jeffersonian. One is that forensic podiatrist Dr. Douglas Filmore (Scott Lowell) is back with a new license in overall forensic pathology. He’s here to write about cooperation between Americans – as personified by Brennan – and Canadians. Filmore is actually helpful in solving the case, and by the end, he’s taken a page from Brennan’s book and decided to be assertive.

Additionally,Cam(Tamara Taylor) has been selected for an award as Outstanding Female Scientist by a prestigious magazine. Brennan is irked, as she feels that she is a much more outstanding scientist than Cam. It takes Booth and Angela (Michaela Conlin) both explaining to Brennan that having someone acknowledge Cam doesn’t diminish Brennan’s success for Brennan to calm down. Cam further defuses the issue by telling the magazine that she wants them to honor Angela and Brennan as well, as she feels their excellence is achieved as a team. Then the magazine wants them to pose in bikinis and they agree.

Finally, Brennan tries to get Booth to play chess, but Booth insists on playing one of the board games their toddler daughter uses instead.

The parallels between chess and Sweets’ interrogation techniques with Tim are handled nicely, even if Tim’s refusal to sacrifice his queen is a bit on the nose. Daley runs with the material and makes it a lot of fun. Bonus points to Deschanel and Boreanaz for the way they silently play lying in a good cause.

On the downside, we’re with Booth when he tells Brennan she’s wrong to be annoyed that Cam is receiving the award, but not so much when he insists that chess is too hard. For all the lip service Booth pays to Brennan’s intellect, he tends not to honor it much in their private moments, and this incident feels like a bridge too far.

Also, Brennan learning about sharing – good. A science magazine forcing its female subjects to wear bikinis? Really, folks? The audience is aware that Deschanel, Conlin and Taylor are all highly attractive, but having none of the characters – particularly the insult-sensitive Brennan – react to the fact that they are being strong-armed due to gender seems unlikely.(as indeed does the magazine’s demand).

However, the chess A story is handled very well. Kudos to both the writers and actor Daley for letting Sweets put his best foot forward.