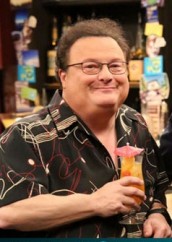 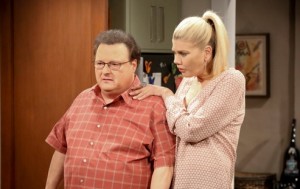 In TV Land’s THE EXES, now in its third season on TV Land, Wednesdays at 10 PM, three divorced men, played by David Alan Basche, Donald Faison and Wayne Knight, live in the same apartment building as the attorney (played by Kristen Johnson) who handled all of their splits.

Knight, who plays Haskell Lutz, achieved TV immortality in his recurring role as the gleefully malevolent Newman on SEINFELD. The Georgia-born actor was in the original JURASSIC PARK, BASIC INSTINCT, JFK and other high-profile features. His other TV gigs include being a series regular THIRD ROCK FROM THE SUN, a recurring guest on TV Land’s HOT IN CLEVELAND and appearing in TORCHWOOD: MIRACLE DAY.

TV Land invites the Television Critics Association to observe a read-through of an episode of THE EXES. The reporters sit in the seats where the audience for the multi-camera half-hour comedy will be on show night. Following the high-spirited performance, the actors make themselves available for questions.

Knight remains in his seat from the read-through, cordially talking about THE EXES and notable past productions.

WAYNE KNIGHT: Well, I think TV Land shows have a little more heart, a little more looking into the workings of how people feel, as well as how people think, and just being funny without that background. In SEINFELD, basically, the graduation ring said, “No hugs, no lessons.” So it was colder, that specific kind of bent in the Nineties where you were looking at venal people and what their motivations were, so it was a different social dynamic to now.

AX: Then again, Haskell doesn’t seem to be all heart and all honesty …

KNIGHT: No, no, no, not in the least. I’m just saying in terms of the way you look at stories, there are some stories that will be about relationships, as well as just what happens to them in life.

AX: How do you see Haskell?

KNIGHT: I see him sitting on the couch. I see him moving as little as humanly possible [laughs]. Haskell is someone who believes that the bus has passed and he’s trying to build a new bus. There’s a lot to be mined from Haskell that I haven’t gotten to yet, but it’s a kind of peeling of the onion process. There’s a smelly onion there.

AX: Have we met Haskell’s ex-wife yet?

KNIGHT: Yes. Lisa Ann Walter played my ex. She was great. She was kind of a tough, ballsy woman. Haskell’s career began to fade and he thought she left him because his career faded, and she left him because he felt bad about himself. So it was a very nice, touching thing. In the episode where she came back, she was in a car accident, her head’s been hit, she has a little amnesia and she thinks they’re still married – and of course he takes advantage of her [laughs].

AX: Is working for TV Land different than working on a broadcast network half-hour?

KNIGHT: No, not really. Here I am at CBS Radford, going to my same dressing room. I think that the difference is, the [TV Land] network is more intimate and you have a working relationship with the head of the network and the executives and it feels friendlier, but aside from that, the working process and the way a week works, and honing a script, arguing over it, getting it better and getting it funny for the night is the same. It’s very similar to being in stock. You’ve got five days to put a script together, you start out with various degrees of what you’re happy with or not happy with at the table, you rehearse the first day and get it on its feet, the second day you do a producers’ run for the writers, the third day, you do a network run, then you do a camera block, then you’re up. So it’s the same in that sense. It’s a form that I’m very familiar with. It’s about the closest thing to bank robbery that I know [laughs]. Best job ever.

AX: Do fans of THE EXES treat you differently when they recognize you on the street than SEINFELD fans do?

KNIGHT: Well, I think that first of all, there’s like an overpowering tattoo of Newman on me. So people may say, “Oh, I love you as Haskell, Newman” [laughs], so I don’t think I’m ever quite going to shuck that, but I do always find when people come up to me and say, “I love your show,” and then they go, “Your new one!” I’m like, “Oh, great!”

Because really, [THE EXES and SEINFELD] are both playing simultaneously. One forgets that SEINFELD is continuing to go on and being seen by new generations of people who haven’t seen it before.

AX: Do science-fiction fans still come up to you about your work in JURASSIC PARK?

KNIGHT: You know, they do, but most of them are Japanese. But I went to a sci-fi convention shortly after JURASSIC, and I did a role in TORCHWOOD, which lets me keep my card as a sci-fi geek, and I was always a sci-fi geek as a kid. So I love that association. I like that demo.

AX: With JURASSIC PARK, did you like being in on the ground floor of that style of special effects?

KNIGHT: Yeah. Because now, in the days of AVATAR and so on, we forget that nobody had seen anything like that when that movie came out. And it was so stunning. That’s the only kind of blue-screen acting that you could do where it actually felt like it was worth it. I mean, having done SPACE JAM, without people anywhere for miles around, it didn’t have the same feeling as what was done in JURASSIC. It was unbelievable.

AX: On JURASSIC PARK, did you ever have some kind of three-dimensional thing there to work with?

KNIGHT: Well, for me, most of the time, I actually had Stan Winston’s crew operating [a dinosaur]. So it wasn’t like I was acting with nothing. I remember going down and seeing this bay of velociraptors, all the puppet velociraptors, ready to go. It was watching cars in a garage. So there was a lot more reacting to actual things than you’d realize.

KNIGHT: This is taking up my time at the moment. The pattern of pick-up for TV Land is not as cyclical and regular as network television, so it’s really hard to book [other projects] for long periods of time. I used to be able to book theatre gigs during hiatus, but you’re not quite sure of the length of hiatus right now, so I’m still up in the air.

AX: Is there anything else you’d like to say about THE EXES right now?

KNIGHT: Well, I think the thing about THE EXES is, you’d be surprised. There are a lot of people here who know what they’re doing – writers who’ve done it before, actors who’ve done it before – and a sense of comfort in terms of what we’re doing. The shows are funny and they hold together and I’d just like them to be sampled as much. I think you come and check us out, you’ll like us.