Home » THE ADVENTURER: THE CURSE OF THE MIDAS BOX DVD review 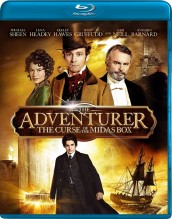 © 2014 Image Entertainment
THE ADVENTURER: THE CURSE OF THE MIDAS BOX
Reviews

DVD Review: THE ADVENTURER: THE CURSE OF THE MIDAS BOX 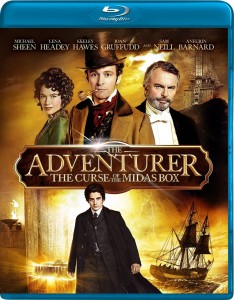 THE ADVENTURER THE CURSE OF THE MIDAS BOX | © 2014 Image Entertainment

Adapted from G.P. Taylor’s 2007 novel MARIAH MUNDI: THE MIDAS BOX, the film THE ADVENTURER: THE CURSE OF THE MIDAS BOX resembles the sort of the less memorable live-action fare Disney and the independents used to crank out in the Sixties and Seventies. The plot feels like it has the potential to be exciting, but because it is in many ways so earnest and uninflected, the target audience would seem to be younger children who haven’t seen enough movies yet to get impatient with the brave but unexceptional hero.

It’s 1885 and Mariah Mundi (Aneurin Barnard), elder son of the wealthy Mundis (Ioan Gruffudd and Keeley Hawes), comes upon the injured Captain Jack Charity (Michael Sheen). Jack works with the secret government agency the Bureau of Antiquities, charged with finding and protecting rare and supernatural items. (Think WAREHOUSE 13, staffed by Her Majesty’s government.) Jack’s current quest and a two-piece amulet that Mrs. Mundi gives to Mariah and his little brother Felix (Xavier Atkins) result in the kidnapping of the senior Mundis. When Mariah and Felix are separated, Mariah tracks his sibling to a seaside hotel, where the owner Mr. Luger (Sam Neill) is obsessed with finding the Midas Box, which may be a wealth creator, a tool of healing or an agent of ultimate destruction.

The Midas Box is not a total maguffin – it does come into play late in the game – but there are so many detours and distractions en route to finding it that we’re not seriously concerned about the outcome. Mariah rises to the occasion and Barnard gives a committed and sober performance, but the script doesn’t give us any reason to find him interesting, beyond his commendable commitment to his brother.

The villains here are baddies with a capital B – Neill very nearly is made to utter “Mwuhahaha” at one point – and bits of magic are dropped in with very little set-up.

The main reason for at least some adults to watch THE ADVENTURER will be to see Sheen (so brilliant in MASTERS OF SEX) get to do a fair amount of swashbuckling, as well as broad comedy, and to see Lena Headey (of GAME OF THRONES) in some sumptuous outfits.

For students of film adaptations of young adult fantasy novels, THE ADVENTURER: THE CURSE OF THE MIDAS BOX is an example of what happens when the filmmakers are less than scrupulous with the story’s connective tissue and don’t display affinity for the characters.

Special features on the DVD and Blu-ray editions include a making-of featurette.

Article Source:Assignment X
Article: DVD Review: THE THE ADVENTURER: THE CURSE OF THE MIDAS BOX