An episode with a good, surprising plot twist and double buddy comedy fun 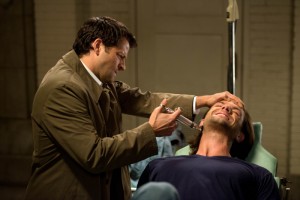 Directed by John Badham – yes, the helmer of the Frank Langella DRACULA, SATURDAY NIGHT FEVER and WARGAMES, among other credits – the SUPERNATURAL episode “First Born” comes up with a surprising yet logical (within the context of the show) bit of mythology, while working buddy comedy from two separate angles.

While Dean (Jensen Ackles) is out on the road hunting Gadriel, he is accosted at a bar by Crowley (Mark A. Sheppard). Crowley waves away the fact that Dean threatened to kill him the next time they crossed paths; he wants Dean’s help in getting rid of Knight of Hell Abaddon. To do this, they need the First Blade, an angel-forged weapon. Information on the blade may be in the chronicles of Dean’s dad, John Winchester.

Meanwhile, back at the Men of Letters headquarters, Castiel (Misha Collins) continues to heal Sam (Jared Padalecki). Sam has traces of angelic grace left in him from Gadriel’s possession. Since it seems that a tracking spell may be made from the grace, Sam offers himself as an experimental subject to see if it will work.

A tracking spell for the First Blade leads Dean and Crowley to a cabin, which turns out to be the dwelling place of the blade’s owner and wielder, Cain (Timothy Omundson). It turns out that we’ve heard the Cain and Abel story all wrong all these millennia. Abel had been seduced by Lucifer – Cain offered his soul to Lucifer if Abel could go to Heaven, and Lucifer agreed, on the condition that Cain be the one to kill Abel so his soul could ascend. Cain formed the order of the Knights of Hell, but eventually fell in love with a good woman. He wound up killing most of the Knights of Hell, but Abaddon created a situation where Cain accidentally killed his lover.

Abaddon’s demons torture Dean’s contact into revealing the cabin’s location. Cain doesn’t involve himself in the fight for awhile. Crowley kills one demon, Dean kills the others and Cain finally says that he threw the First Blade, the jawbone of an animal, into the deepest part of the ocean. Crowley can access that. Cain admires Dean and gives Dean something he’ll need to get the blade to work – the mark of Cain, though he warns it carries a heavy price. Dean is furious with Crowley for fibbing to him and for getting Dean’s contact killed. Crowley doesn’t seem too worried that Dean will kill him, or even never speak to him again. They leave, with Cain finally willing to do some demon-slaying again. Woe betide those who attack the cabin.

Castiel opts to stop probing Sam for angelic grace, as to continue will kill him. When Sam objects, Castiel says the old Cass would have kept going – the ends justify the means – but the Castiel who has been human sees that Sam’s life is precious. Furthermore, Sam gave up on closing the gates of Hell in favor of life and Dean’s pleas. Sam is still angry at Dean for tricking him into letting Gadriel possess him, but accepts Castiel’s goodwill.

Should there be any question in any reader’s mind, yes, the scenes with Dean and Crowley are more fun than the scenes with Sam and Castiel. Quips, rage and ass-kicking tend to be more entertaining than sulking, rumination and vamping around something that winds up not happening (the angelic grace never does anything). Still, Cass and Sam have some nice moments, including a brotherly hug.

However, the Cain mythology is surprising, cool and fits well within SUPERNATURAL’s trademark craziness. Omundson easily slips into the vibe of off-the-cuff otherworldly beings. As to what the mark of Cain does, besides activating the Knights-of-Hell-destroying blade, want to bet it promotes fratricide? We’ll see. Meanwhile, “First Born” is a strong episode with many elements that make this series work.