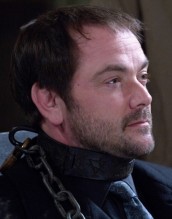 Dean, Castiel and Crowley working together – need more be said? 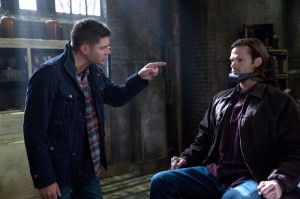 “Road Trip” is the best kind of humorous SUPERNATURAL episode. It’s not constructed as a joke-fest, but rather has a setup that allows the laughs to come organically out of the characters – even though Dean (Jensen Ackles) hardly feels like laughing at the outset.

Poor Dean. The angel Gadreel has hijacked Sam’s (Jared Padalecki) physical form and used it to murder Kevin Tran, then informed Dean that Sam was gone for good, then left, still in Sam’s body. Dean calls Castiel (Misha Collins), realizing they need to cast Gadriel out of Sam. Although Castiel now has his angelic grace back, he and Dean are in a quandary. In order to reach Sam – who is locked away in a fantasy created by Gadriel to stop Sam from realizing an angel is in there with him – someone will have to go into Sam’s head. Castiel can’t do it, since angels must be invited into a host body.

This leads Dean to uncomfortably approach his prisonerCrowley(Mark A. Sheppard) for help. The erstwhile King of Hell points out that, as a demon, he doesn’t need an invitation to get into Sam’s head.Crowleywill help, on the condition that Dean releases him. When Dean hesitates,Crowleypoints out that if he’s Plan A, Plan B must really be something. And so it comes to pass that Dean, Castiel andCrowleyall hit the road in Castiel’s enormous Cadillac.

They successfully track down Sam,Crowleygets into Sam’s head and persuades Sam that he’s trapped in a fantasy. Sam casts out Gadreel (played as a separate entity by Tahmoh Penikett) and Castiel is at last able to heal Sam so that he’s not dependent for survival in having an angel within.

Once Sam understands what happened, he’s angry at Dean for lying to him and not letting him make his own choice about dying. Dean is worried that everyone around him dies. Dean and Sam separately blame themselves for Kevin’s death. Dean goes off by himself in a cloud of guilt and despair; Sam doesn’t go with him, staying behind in a cloud of righteous anger.

In the B and C plots, Metatron (Curtis Armstrong) continues to exhort Gadreel to carry out killings, including Gadriel’s longtime best friend. (No wonder Gadreel has a reputation as a chump.)Crowleyconfronts Abaddon (Alaina Huffman), but refuses to straight-out fight her; instead, he plans to campaign for King of Hell.

Crowleyis probably going to come out on top, since he’s a much better salesman than Abaddon is and he knows how to provide incentives. Also,Crowleyand his deals are much more entertaining than Abaddon and her anger issues.

Metatron is getting slimier by the minute; by now, we don’t want him running Heaven on general principle, never mind the damage he’s done. Arguably most infuriating thing so far – Metatron announces he’s found a way to prevent new Prophets of the Lord from coming forth. The Prophets of the Lord have been great characters. Shame on you, Metatron.

Then we have Sam and Dean. It wouldn’t be a season of SUPERNATURAL if the boys didn’t stop speaking to each other for awhile, but wow. They don’t learn, they don’t yield, they throw brotherly love out the window on a regular basis. Their dynamic is part of the groundwater of the show, but it still feels like, gah, they’re sulking again.

On the other hand, Crowleyand Castiel kicking each other like irritable preteens in the back seat of the Cadillac is the kind of situation SUPERNATURAL lives for. It is sublime, silly and totally earned. Mostly, this is a fun “Road Trip.”