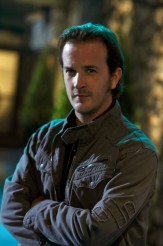 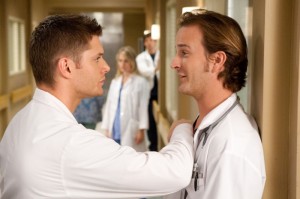 Richard Speight Jr. is known to a whole bunch of different viewers for his work on a wide variety of projects. Fans of HBO’s 2001 miniseries BAND OF BROTHERS recognize the Tennessee-born actor as Sgt. Warren “Skip” Muck. Those familiar with the series THE AGENCY remember Speight as Lex. On the near-future post-apocalyptic JERICHO, Speight played Bill, and on JUSTIFIED, he’s recurred as not-very-bright crook Jed Berwind.

Speight’s role over four episodes of SUPERNATURAL – currently in its ninth season on the CW, Tuesdays at 9 PM – is notable, for a number of reasons, one being that he played three different characters who were all the same person. When he was introduced in 2007’s “Tall Tales,” he seemed to be the incarnation of Coyote, the Native American Trickster. Later, we found out he was Loki, the Norse god of mischief and then he turned out to be the Archangel Gabriel, who had just been pretending to be the other two deities.

Gabriel apparently was killed by his brother Lucifer (played by Mark Pellegrino) in the 2010 episode “Hammer of the Gods.” However, given the fact that dead people don’t always stay gone on SUPERNATURAL and the current angel-vs.-angel storyline, might Gabriel return?

“The idea of bringing Gabriel back has been on the table since I left,” Speight relates. “Anybody who’s been on the show will tell you that when you die, you oftentimes would get a phone call, especially back in the day when I was doing the show, from [series creator Eric] Kripke. In this case, it would be [current show runner Jeremy] Carver. But Kripke would call and say, ‘Listen, you’re dead. Just so you know.’ Because this show varies so much in how it treats its characters and how many lives they have, the on-again, off-again stuff, that he would make it very clear, ‘You’re dead.’ When I did the last episode, which was ‘Hammer of the Gods,’ he made the opposite phone call, to say, ‘You’re not dead.’

“So the idea of Gabriel coming back, either as the Trickster or Gabriel or a combination of both, has been on the table since then, and honestly, because I happen to know several of the guys who are writers, actually from other worlds – Robbie Thompson and I worked together on JERICHO years ago – they tell me all the time, the character will be on the board, it’s being bandied about, sometimes they’re very serious about it and then for whatever reason, it doesn’t come to fruition. I’ve had conversations with [SUPERNATURAL executive producer] Bob Singer about this, Robbie Thompson – the character of Gabriel was so significant in the way he entered and exited any episode, and what he brought to that episode, and what that episode brought to the over-reaching mythology and arc of that season, that they are loath to screw it up. So it’s a blessing and a curse, right? Because the character had some amazing episodes, and I got this great stuff.

“But what that also means is, he can’t just breeze into an episode and deliver some information and leave. You can’t just dot in to various episodes. When that character comes back, he has to come back in a way that matters, that is significant and that is consistent with what the character’s doing and how dramatic his appearances have been previously, and it has to have a reason, it has to matter to the mythology of the show.

“Certainly, the angel-centric storylines going on now lend themselves to possibly opening that door, and again, it’s consistently being brought up in the writers’ room. It’s really a matter of all those things coming to pass. It’s so complicated to do that correctly. And even I feel like, as much as I want to come back on the show, I don’t want to jump the shark with the character. Because the episodes have all been really great. Kripke told me as recently as a year ago that ‘Changing Channels’ is his favorite episode of the entire series. He loves it. And he didn’t even write it [Carver scripted the episode]. So when you have that kind of gravitas behind your episodes, I don’t want to screw it up. I don’t want them to write me in and have the fans be disappointed, or they brought me back just to bring me back but it kind of cheapened the previous episodes, because it made some hackneyed excuse for why I’m back. So it’s a double-edged sword, because obviously, I want to come back. I love that character, I love the show. It’s a rare opportunity to play that caliber of a character as a guest star. This is rare. And I know that they’re seriously pursuing it and looking for an angle and the right way to do it. So the answer is – that’s a very long way of saying ‘Maybe?’” he laughs.