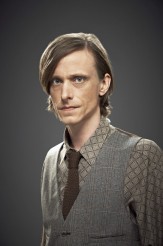 Exclusive Interview: ALMOST HUMAN star Mackenzie Crook is the man behind the machine

The actor talks playing the scientist "father" of an android 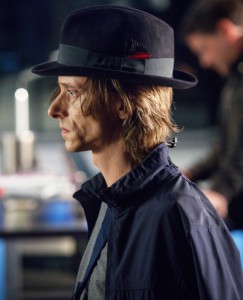 In the near-future world of ALMOST HUMAN, Fox Mondays at 8 PM, it is mandated that all police officers have android partners. However, there’s something special about Dorian (Michael Ealy), the android partner of Detective John Kennex (Karl Urban) – Dorian has emotions. Dorian also has a very concerned and inventive computer scientist advocating on his behalf, one Rudy Lom, played by Mackenzie Crook.

Crook got his onscreen start as The Man in 1996’s THE MAN WHO FELL IN LOVE WITH A TRAFFIC CONE. Since then, his many credits have expanded to include the original British version of THE OFFICE, the first three PIRATES OF THE CARIBBEAN films and the role of Orell, one of the unfortunate attendees of the Red Wedding on GAME OF THRONES.

At a party thrown by Fox for the Television Critics Association, Crook talks about playing the man behind the manlike machine.

ASSIGNMENT X: How did you become involved in ALMOST HUMAN?

MACKENZIE CROOK: I auditioned like everyone else. I put myself on tape and got the part. It’s strange – it’s the first part I ever got through taping myself at home in theU.K. and sending it off, and they liked what I did.

AX: Where are you from in the U.K. originally?

CROOK: I was born in Kent and I live in North London.

AX: Did they specifically want a British actor to play Rudy Lom, or was it open?

AX: Had you played any other sort of mad scientists or eccentric technicians before?

CROOK: Not quite that specific. I tend to play quirky, geeky types of characters, but I think this is the first scientist I’ve ever played.

CROOK:U.S. TV, yeah. I’ve done various movies over here, but this is my TV job in the States.

AX: Is it different from doing British TV?

CROOK: Absolutely. It couldn’t be more different. It’s so much bigger [in the U.S.] In the U.K., it just seems very small, and this is a monster, a behemoth.

AX: What’s your take on Rudy?

CROOK: He’s obviously developing and invented all this incredible and insane technology for the future. But I think he’s grounded in the past. I see him as a craftsman. He likes to know how things work, he’s a watchmaker – there’s something very old-fashioned about him in this crazy future world.

AX: Does he have parental feelings towards Dorian?

CROOK: I think he does. He helped develop this line of androids a few years back and they were dropped and I think he was devastated when they were scrapped. And so yeah, he’s absolutely delighted that this one model has been brought back.

AX: Can you say what he’s going to do as the series goes forward? Because in the pilot, it seemed like, “You need an android, here’s an android, he’s a really good android – off you go.”

CROOK: You mean in the future, as far as my character is concerned? I don’t know. I’m here to find out how my character will develop. I’m told that Rudy has some very important information. He knows an awful lot because he was there at the beginning when these systems were being developed, so there’s scope for some really exciting storylines for my character. I don’t think he’ll always be trapped in the lab.

AX: And have you had to learn how to do anything for the part, like how to handle certain types of tools or equipment?

CROOK: No, just be able to say these technical things as if I know what I’m talking about, say them with confidence, I think. That’s the trick.

AX: Are you very into technology in your real life?

CROOK: Not in the least. Quite the opposite.

CROOK: There are a couple of movies, one called ONE CHANCE [about the singer Paul Potts], one called IN SECRET [due out in February].

AX: Is IN SECRET the new adaptation of THERESE RAQUIN?

CROOK: I play one of the domino players that come around every Thursday night. There’s very few cast in it. Jessica Lange plays Madame Raquin, Elizabeth Olsen plays Therese and then there are the four weird domino players. I can’t wait to see that. That’s going to be huge for [Olsen], I think.

CROOK: No. My diary’s filled with ALMOST HUMAN for the foreseeable future.