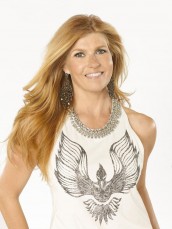 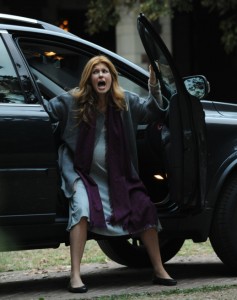 Known for both television and film, Britton has been steadily employed as a series regular in 2006 when, following an arc on 24, she began her five-season stint as beloved high school football coach’s wife Tami Taylor on FRIDAY NIGHT LIGHTS, reprising her role from the 2004 feature. When FRIDAY NIGHT LIGHTS ended, Britton promptly signed on for the first season of AMERICAN HORROR STORY as the ghost-plagued Vivien Harmon.

Although each season of AMERICAN HORROR STORY is completely separate from the others, some actors have opted to come back in different roles. Britton, however, signed on to headline NASHVILLE.

We got to ask her a few questions at a press event hosted by ABC.

ASSIGNMENT X: Did you feel like you there weren’t any characters for you on the second season of AMERICAN HORROR STORY in the asylum storyline, or did you just think you had had enough of getting thrown around on flying wires for awhile?

CONNIE BRITTON: Well, I think I would have had the option [to do the second season of AMERICAN HORROR STORY], but it felt really clear to me that I just wanted to do one season of that show. I did it for very specific reasons, and I had an amazing experience on the show, and I loved it and I loved working with [series creators] Ryan Murphy and Brad Falchuk. But for me, I’m such a chicken and it’s a pretty dark world to live in for more than a year for me personally, so I was sort of thrilled to have the opportunity to do it, and then excited to move to something else.

AX: You’ve mentioned that NASHVILLE is a kind of a return to another style of performing for you …

BRITTON: At drama school, they were, “Oh, you were a triple threat – you can sing, dance and act.” But then I felt as though maybe I should just focus on the acting part. So going back in this direction just felt to me – I came up in that way, with acting, singing and dancing. I wanted to be able to sing, so when the opportunity to sing came along, I thought, “Well, if I really want to put my money where my mouth is, I want to see if I can pull that off.” I’ve had such great experiences in my career so far, and doing FRIDAY NIGHT LIGHTS was kind of the best thing ever, so after that, it’s really been about, “Okay, what is it that scares me? What is it that feels like it’s going to challenge me and stretch me?”