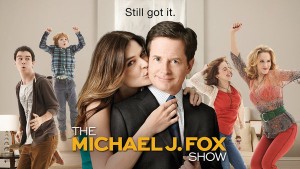 On NBC’s THE MICHAEL J. FOX SHOW, Thursdays at 9:30 PM, Michael J. Fox plays Mike Henry, who returns to being a television newsman after years away – not unlike the way Fox is returning to anchoring an NBC half-hour comedy after years away. Additionally, both the fictional Henry and the real Fox are happily married family men with children, and both matter-of-factly deal with their Parkinson’s disease.

The series was created by Will Gluck and Sam Laybourne, both of whom are executive producers with Fox. Laybourne is at an event held by NBC for the Television Critics Association press tour, happy to talk about all aspects of his new SHOW.

ASSIGNMENT X: Are you and Will Gluck regular writing partners? How did you get involved with developing this series?

SAM LAYBOURNE: Well, I have to say, I owe my entire career to Will Gluck. That’s a fact. He hired me to be a writer’s assistant on a show called LUIS with Luis Guzman on Fox. And we got a relationship and then I went off and did a couple things; he rehired me on a show called THE LOOP. And then we wrote a movie together with four other writers under the nom de plume of Freedom Jones called FIRED UP. And that sort of got Will’s directing career going, and he’s just been really generous to me. I wrote a movie that he helped produce – it hasn’t been made yet, but developed. And then we wrote FATHER OF THE YEAR together, a movie forColumbia. And while we were writing that, we came up with this. We’re not technically writing partners, but we wrote features together, and for the pilot, we broke the story together, and then I wrote the script and he was there with me every day, writing it.

AX: How far along was this project when Will Gluck and Michael J. Fox came to you and said, “Do you want to be a part of this?”

LAYBOURNE: Pretty early on in the road. I think [Gluck] had a couple of meetings with Mike, and I was excited, because I had a little development deal with Sony, and he floated it out one day when we were writing FATHER OF THE YEAR. He said, “Man, this thing’s going to have to be inNew York. Would you ever move toNew York?” And there was a long pause. And I didn’t want to even begin to imagine it as a dream. So I said, “I think I could live inNew York.” It was the greatest opportunity I could ever have had. I was coming from a place of being a writer working on a lot of different shows and really looking to delve into development, and then, you’re going to tell me my first network development is with Michael J. Fox and my great friend? It was a dream.

AX: So you didn’t know Michael J. Fox before this?

LAYBOURNE: I had worked [on COUGAR TOWN] with Bill Lawrence [who created Fox’s previous series SPIN CITY], who I had learned a lot from, and he raved about Mike, but I’d never met Mike before.

AX: What’s going on with COUGAR TOWN now, by the way?

LAYBOURNE: COUGAR TOWN is being run by Blake McCormick, and Bill [Lawrence] is still involved, but Blake McCormick was a writer when I was there, and is one of the funniest guys I’ve ever worked with. He’s wildly talented. They’re in great shape. I love those people – I miss them tremendously.

AX: Now, is there a challenge when one of your fellow producers is also your star?

LAYBOURNE: Yes. It can be. And I certainly have seen that, but the experiences I’ve had – Courteney Cox was an amazing producer on COUGAR TOWN and Michael J. Fox is the best. From the minute he met me, a guy who wasn’t necessarily that proven in the world, I pitched my heart out to him and listened to him and built the show with Will around him, and ever since then he’s trusted me, and whether it’s been at production or writing scripts or pitching the show. At one point, I scripted a little bit of a pitch, and I look over and Mike Fox is looking at me attentively, and I thought, “This is insane.” He is so about the macro and not about the micro at this point in his career. He knows how to just support the work and see the big picture and not sweat the details.

AX: Have you ever worried that something you pitch regarding the Parkinson’s might be offensive?

LAYBOURNE: [Fox] has such a clear attitude about talking about his disability, where the humor is, that we just took his lead. And I read the three books he wrote before meeting with him, and automatically, you have his writing tone in your head. We’ve just followed that. We go for really fun, crazy jokes in all aspects that are irreverent, not just about disabilities, but there’s never a nasty undertone. We’re not into mean comedy on the show, and when you take that out of the equation, it’s just – he’s an advocate for [people with] Parkinson’s. He’s raised this amazing amount of money. So he’s ahead of it and he’s the one making the first joke and he’s letting the audience say, “This is okay.” Because so many of us have disabled people in our lives, or people who are struggling with an illness of any kind, and so it’s actually quite universal. My dad just lost sight in his left eye, and I said to him, “Keep your eye on the prize” the other day when I left the house, and he laughed. When you lose vision in your eye, it’s a big bummer, but you laugh about it. We always felt like, in the pilot episode, if we hit this thing, we punch the shark in the nose. We just go at it. But the show, in perpetuity, you’ll see – Parkinson’s becomes almost like a complication, versus a motor. So the stories don’t stem out of Parkinson’s. It’s his life.

AX: When did production start?

LAYBOURNE: We had a long pre-production, because we wanted to really be in good shape. It’s important with a show like this that the actors have the work early. So we started in, I want to say April, or actually March, and then we had basically twelve weeks of pre-production. And then we started shooting, I think it was June 2.

The pilot was done in the [previous] winter. What’s really funny is, the first episode was shot in zero degree weather, and the second episode, when it was shot, it was a hundred degrees one day. But that was an episode where Mike plays hockey.

AX: And is there anything else you would like to say right now about the show?

LAYBOURNE: Well, I just would like to say, “Hey, what do you think of the cast?” And my answer would be, “They’re incredible.” Michael works really well when he’s surrounded by a funny ensemble. He loves when other people get the jokes. Early on, we said, if this is going to be a show for many years, we want to make sure it’s a fully-realized ensemble. So Mike is not in every scene, it’s a big world to explore with all these characters, and we hit the lottery with every single one of our cast members, from little Jack Gore to Katie Finneran to Juliet Goglia, Conor Romero who’s basically an undiscovered guy – he’s going to make you laugh so hard.