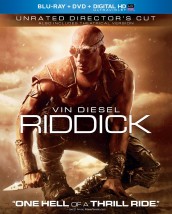 RIDDICK Highlights this week in Blu-ray, DVD and VOD Releases

Also reviewed: CARRIE, YOU’RE NEXT, PLUS ONE and more 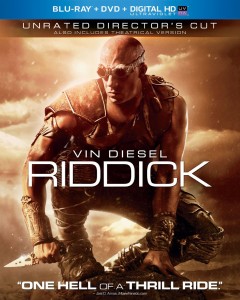 RIDDICK – The cool thing about RIDDICK is that they decided to go back to the original formula of this bad ass guy fighting big, bad nasties rather than continue the path of him fighting an undead-alive army. Sure, they have a bit about this in the film but it really only serves to set the stage for a movie that is more PITCH BLACK than it is THE CHRONICLES OF RIDDICK. With good measure too. While CHRONCILES is OK, it pales in comparison to PITCH BLACK. After being left for dead on a desolate planet by the undead-army that he was commanding (after CHRONICLES), a beat-up Riddick (Vin Diesel) must find a way to survive and eventually get off the crappy rock he finds himself on. In order to do this, he uses a mercenary beacon to call down bounty hunters to the planet, one of which has a distinct tie to the first movie. Besieged by monsters during a huge planetary storm, they must work together in order to survive and leave.

Again, RIDDICK works because it has more PITCH BLACK and the Riddick we originally saw rather than going for something bigger. In this case, bigger is not better and a more quaint film where Riddick gets to show just how much of a bad ass he really is fits the character perfectly. I really enjoyed RIDDICK as I’m a huge fan of PITCH BLACK and what that film did for horror and science fiction. There is a decent alternate ending on the Blu-ray version (which is the way you should see it because of the intense special effects) and some pretty good featurettes that explain the making of process. 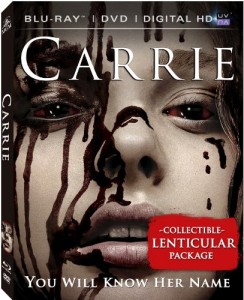 CARRIE – As far as remakes go, CARRIE is pretty good. Now, I realize that’s not saying much as most of the horror remakes are pretty god damn awful. But given how old and dated the original is and how it may not be the best movie to begin with, to me this wasn’t an eye roller when I first heard about it. The wonderful Chloe Grace Moretz plays the lead role as a horribly treated daughter of a bible thumper that gets put in a closet for “sinning” and has to wear the lame clothes her mother makes for her to high school. When Carrie has her period in the shower after gym class, it not only awakens her to womanhood but unleashes telekinesis powers that begin to grow more powerful by each day. While some of her high school mates treat her terribly, others actually try to make amends for the pain they put her through all leading to the inevitable prom scene where Carrie’s powers come full circle and she takes her revenge in a most brutal way. CARRIE is a slick horror film that does a decent job of reimagining the classic, however, it won’t win any award for the best horror flick of last year but is a decent watch. 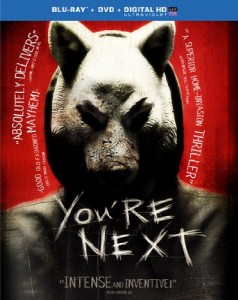 YOURE NEXT | (c) 2014 Lionsgate Home Entertainment

YOU’RE NEXT – What might win for the best horror flick of 2013 is YOU’RE NEXT, a slick home invasion film that is cleverly written and cleverly drawn out to give the story time enough to put all the pieces in place logically. A reunion of a very large family at a remote house brings the sisters and brothers as well as their significant others for a moment of reflection and embrace. However, when a masked group of killers descends upon the house and begins killing the family members one-by-one, an unlikely heroine emerges with a keen knack for survival, turning the tables on the killers and whoever else might be involved in the attack. There are some good twists and turns along the way in YOU’RE NEXT but you can see them coming but that still doesn’t take away from how well this film is done and how much fun it is seeing the comeuppance the killers get for attacking this group. If you like bloody killer films put this one at the top of the list as it is highly recommended. 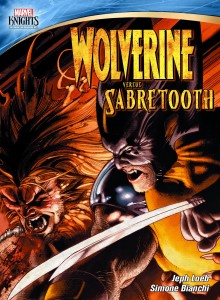 MARVEL KNIGHTS: WOLVERINE VS. SABRETOOTH – The latest Marvel Knights live motion comic features the epic battle between one of the most popular characters in the Marvel Universe, Wolverine, faces off against his long-time nemesis Sabretooth. There has always been a hint in Marvel mythology that Sabretooth was somehow related to Logan because of the similarities between them – both have expand healing factors, both are feral to an extreme. The story is word-for-word captured from the Wolverine comic book, which is nice, but more importantly we get to learn all about their relationship and the ties they have to each other. There are plenty of flashbacks to Logan’s past and some hints to evolution as a whole (at least by Marvel lore’s ideas) and makes it fun for those that have either read the comics or have an inkling about the rivalry between these two. 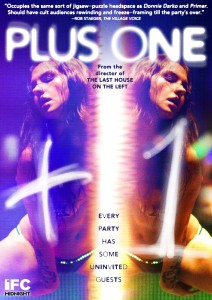 PLUS ONE – You gotta hand it to IFC Midnight for having the balls enough to keep signing off on horror flicks that go into mind f*** territory pretty much every film without any regard to whether it makes sense or not or if there are any conclusions drawn. PLUS ONE is about a ginormous party that’s going down filled with high school assclowns, junkies, meatheads and two barely naked dancers. But when some weird light show for whatever reason copies all of the partygoers, things go from typical party to psychedelic nightmare. Are the people that got copied the same? Or are they aliens? And as they catch up in time to the original partiers, will they take over or merge? Or will it end without any answers and just leave us wondering what the f*** just happened? (hint: the last one is more than likely). Still, this has some good nudity, some decent production values and acting so it is worth checking out if you happen to see it available.