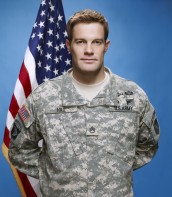 The actor talks about his new military half-hour comedy 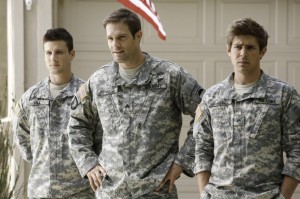 Stults was born in Detroit and raised in Colorado. He previously toplined the BONES spinoff series THE FINDER and was also a regular on BEN AND KATE, HAPPY TOWN, OCTOBER ROAD, REUNION and 7TH HEAVEN and has feature credits that include THE WEDDING CRASHERS and J. EDGAR. He’s present at a Fox ENLISTED Q&A session for the Television Critics Association and, later that evening, at a Fox party, also for the TCA. The following is derived from both a private interview at the party and from responses given at the Q&A event.

ASSIGNMENT X: Has ENLISTED changed much from when you originally got involved with it?

GEOFF STULTS: There are subtle script things that have changed, but tonally, no. It’s the show that we signed on to do, which is fantastic.

AX: How is it playing within the trio of the brothers? Because Pete is sort of a smartass, but Chris Lowell’s character Derrick is an bigger smartass.

AX: Are you a big brother in real life?

STULTS: No, actually, I’m the little brother. This is the first time in my life I’ve felt like a big brother. It was really interesting for me. It was very important when I sat down with Mike [Royce, executive producer on ENLISTED along with creator Biegel] and Kevin that I got to be involved in all the casting. It was important to find guys [to play Pete’s brothers] Number One, that I thought were good guys; Number Two, that we thought were fantastic actors. And it was important to me to find people that I thought were better than me and I could really feel like I lucked out. And when Parker walked into the room for the first time, I felt like I was hugging my little brother. He kind of stole my heart.

AX: Is any of this anything like your relationship with your real-life brother?

STULTS: Yeah. No matter what, there’s a dynamic, I think, with brothers. Probably Kev can talk about it. I’m about forty pounds bigger than [Stults’ real-life brother] and much taller, but he’s still my big brother. And he reminds me of that, and I think at a certain point, you stop fighting. Those kinds of things, if they’re not solved early on, they’re not going to get solved any more. But I wouldn’t fight my big brother, even though I’m bigger. He made everything easier for me, because if he was interested in it, then I became interested in it. And then I learned from his mistakes. So he’s still my big brother, and I always have and always will look up to him in many ways. So it’s been a fun dynamic for me. The brother relationship is what originally drew me to the show, because of my own relationship with my brother. And then the fact that we lucked out and got two guys that, I think, we seem like we could be related. At least, people keep telling us that. Or at least, we get along a lot.

AX: Where did you shoot the pilot for ENLISTED?

STULTS: We actually shot mostly on set and then at a place called Cal State Channel Islands, which used to be an insane asylum and is now a college and it just happened to have what we needed with open spaces and a lot of things that looked like barracks. But as far as the military’s concerned, we weren’t on a base. We had military advisors there to make sure we didn’t screw up.

AX: The ENLISTED actors, as of the time of this interview, are about to go to boot camp to learn how to seem more military. Is there anything you’ve already had to learn how to do to play the part?

STULTS: Just a little. It’s a little bit of paying attention to the way you walk, the way you talk, the way you stand, the way your uniform is, very subtle things that we have military advisors there for, but I think next week I’m going to learn a lot more.

AX: What are you most looking forward to learning about going forward with ENLISTED?

STULTS: I’m interested to see – which I’ve never seen before – the way that real senior officers talk to their underlings. I want to see the way that rank plays.

AX: Pete has a line or two in the pilot that indicate he’s not very happy about being back at base …

STULTS: That line that my character has [he says because he just felt guilty that he wasn’t overseas with the guys that he was serving with before. He wanted to be there because he felt that was the only way he could contribute. What we’re going to see throughout this show is that what we do here in the Rear D is just as important, because we’re there to support the families of those that are overseas. The one thing that’s important to all of us is that we do justice to how we are portraying ourU.S. servicemen and women.

AX: Have you made any suggestions to the writers regarding your character?

STULTS: Not yet. I will eventually, but right now, I’m just enjoying what we’re doing.

AX: Do you know if they’re going to bring back your FINDER character Walter Sherman on BONES wrap up THE FINDER?

STULTS: So we continue to talk about it. Hart [Hanson, creator/executive producer of BONES] and I have talked about it and it’s a scheduling thing at this point. We’d love to – I don’t even want to say “wrap it up,” because if BONES keeps going, then Walter and THE FINDER can keep going, and I’d love to continue on. I’d like to keep that character alive as long as possible.

AX: Do you have any memories you can share about your FINDER costar, the late Michael Clarke Duncan?

STULTS: I had the opportunity to work with Mike for a year [on THE FINDER], and we basically worked together every day. We lived together. I’d worked with Mike years before on a movie [D.E.B.S. in 2004], so I’d known him. It was an awful experience to watch somebody who was so vibrant and full of life and happy and seemingly so healthy go through that experience and it was f***ing horrible.

I was in the hospital the day [Duncan died], and I was a pallbearer at his funeral. It was a terrible thing to watch somebody that was so big and full of life, and then you can just kind of see it getting sucked away from him. But Mike was a happy guy, and he lived the live that he wanted to with his creepy six cats and his dogs. And this is a true story – he had it in his will to make sure that his animals were taken care of. So he will be missed. The last time I did one of these [Television Critics Association press tours] was with him.

AX: Do you learn anything at Television Critics Association press tour that’s useful to you?

AX: Now that you’ve worked a fair amount in both formats, do you have a preference between half-hour and hour and hour television shows?

STULTS: I’m really enjoying the half-hour world. I loved THE FINDER, I loved OCTOBER ROAD, I loved all those opportunities, but I’m enjoying this now.

STULTS: I finished a film called A BET’S A BET. It’s a romantic comedy with Mena Suvari and Kristen Chenoweth and Josh Hopkins and Eric Roberts. It’s a lot of fun people.

AX: Is there anything else you’d like to say about ENLISTED right now?

STULTS: It’s the funniest show on Fox. There are actually a lot of really funny shows on Fox this year and I’m happy that they made an effort to really bring back half-hours. I’m just excited about it – I think people are going to really like it.