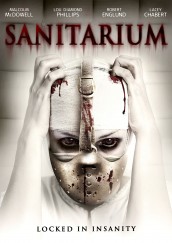 SANITARIUM is like one of those good old grab bag horror movies that Hammer and Amicus used to make, or like a long episode of NIGHT GALLERY, with each segment having a different director and set of writers. However, as the whole project seems a collaborative venture between the directors and writers (credits appear on multiple segments), it’s disappointing that there isn’t a stronger through-line in the wraparound sequences, featuring Malcolm McDowell as the chief psychiatrist at a hospital for people suffering from severe mental trauma.

The opening has promise, with the audience seeing the creepy horrors flashing through the patients’ minds as McDowell’s Dr. Stenson tells us in voiceover about how insanity functions.

The first and best segment here, “Figuratively Speaking,” stars John Glover as a folk artist who has become more than a little fixated on the figures he’s created. Robert Englund plays his agent (despite Englund’s prominent billing in the credits, it’s not a large role, but he does it well). The tableaus created within the story are nicely creepy, as though the artist were a more serious-minded Tim Burton, and there’s a bit of a good mystery leading up to exactly who wound up institutionalized and why. Glover is admirably impassioned, haunted and tender as the tale’s central figure.

“Monsters Are Real” is notable primarily for its sensitive handling of material that could easily seem way too disturbing for the framework. David Mazouz (of TV’s TOUCH) stars as a young boy whose alcoholic father (Chris Mulkey) is verbally, physically and possibly sexually abusive. An actual monster seems less scary in comparison. The filmmakers are on to something here, and the look and size of the monster is well-calibrated – just inhuman enough to be alarming – but it feels like nobody quite knew how to make this fully pay off. The upshot is that our emotions are stirred, but the potential outshines the result.

Finally, there’s “Up to the Last Man,” with Lou Diamond Phillips as a teacher/Doomsday prepper who believes that the Mayan calendar (which ended in 2012) predicts an apocalypse. This is the longest and least of the segments, as it repeats itself a good deal. Moreover, the filmmakers try to tie this in with the wraparound sequences but do it so late in the proceedings that it’s less subtle and/or clever than a misfire.

There also seems to be a half-realized subplot with Dr. Stenson, who first seems to be a Rod Serling-like host, then a malevolently knowing participant, and finally a decent enough doctor trying to figure out what’s going on with his patients. None of this is strong enough to change the film’s overall effect, but as far as they go, these attributes are presented in decreasing order of effectiveness.

There isn’t a lot of true terror in SANITARIUM, but Glover and “Figuratively Speaking” are both worthwhile and “Monsters Are Real” has enough disturbing atmosphere to warrant a look.