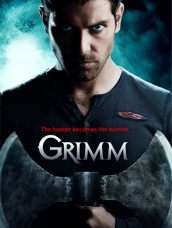 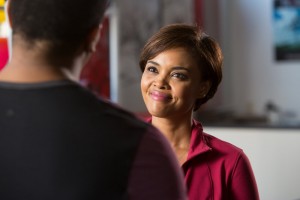 In Season 3 of GRIMM, NBC on Fridays at 9 PM, quite a lot is going on with all the characters. Our hero, Portland, Oregon police detective Nick Burkhardt (David Giuntoli) is a Grimm who can recognize and, when need be, fight Wesen, supernatural beings who conceal their true identities behind a human appearance. Nick started the season as a zombie and killed a man in a bar fight before being restored to normal.

Nick’s girlfriend Juliette (Bitsie Tulloch) and his police partner Hank (Russell Hornsby) now know Nick is a Grimm. Nick’s wolflike Wesen friend Monroe (Silas Weir Mitchell) has just moved in with his foxlike love Rosalee (Bree Turner). Nick’s police captain Renard (Sasha Roiz), who has lately recovered from a spell that made him obsessed with Juliette, is half-Hexenbiest and half-Royal, so he’s now off to Vienna to deal with supernatural politics. Meanwhile, the Hexenbiest witch Adalind (Claire Coffee) is pregnant with a baby that was fathered either by Renard or his late brother Eric (James Frain); she’s getting her magical powers back and is likely up to no good.

David Greenwalt, who co-created ANGEL with Joss Whedon, and Jim Kouf have worked together as writers/producers on many projects, starting with WACKO  in 1982. They co-created GRIMM with Stephen Carpenter, and now act as executive producers, alongside Sean Hayes and Todd Milliner, and show runners.

The following two-part interview with Greenwalt and Kouf is derived partly from a private conversation at NBC’s portion of the Television Critics Association press tour, and partly from a roundtable for GRIMM hosted by NBC at Universal Studios in Studio City, California. The discussion covers both macro and micro aspects of GRIMM’s storytelling and production, as well as what viewers can expect in upcoming episodes.

ASSIGNMENT X: At what point did you realize that GRIMM was a hit?

DAVID GREENWALT: I realized it was amazing when I was writing the pilot and we got to the Monroe part and saw this whole other look at the show, from Monroe’s point of view, what that point of view from a Wesen would mean. I just thought the show was good. We just try to do good shows, and I guess when we got picked up for the back nine and the second year and people really started watching and the show is growing. We just want to keep going.

AX: When did you know that you were picked up for Season 3?

GREENWALT: It wasn’t official, but they started to tell us that, unofficially, we were going to be picked up, but yeah, probably March, but it probably wasn’t official until April or May.

KOUF: We had to wait with everybody else. It was very exciting.

AX: Had you not gotten the pickup, would you just have ended with Juliette finding out Nick was a Grimm and not done the zombie story cliffhanger?

GREENWALT: No, we were so sure that we were going into the next year that we designed the end of Year 2 to be a two-parter and the beginning of Year 3 as a two-parter, and it’s really a four-parter, if you look at the big picture.

AX: Did you like the way David Giuntoli played the fast-running zombiefied Nick?

GREENWALT: The way he handled the dialogue in the first episode of this year was incredible, because he has none.

KOUF: Yes. [joking] He was so excited when he got that script, though – no memorization.

AX: Now that Nick has killed a human, albeit when he wasn’t in his right mind, is he a little darker?

AX: Is the videotape of the bar fight going to come back to haunt anybody?

KOUF: Ace in the hole.

AX: Are we ever going to see our regular characters turning homicidal due to magical means again?

GREENWALT: We’re going to have to deal with what happens to Nick, for sure.

GREENWALT: There are a lot of dark trails to go down.

GREENWALT: Well, [Adalind] had her powers removed from her, and so she had no powers. And now she will have them slowly possibly restored. So yeah, you can’t look like a Hexenbiest if you don’t have your powers.

AX: So she will return to being able to look like a Hexenbiest?

GREENWALT: You have to stay tuned to find out what happens to her.

AX: Is Adalind going to have her baby this season?

GREENWALT: You’ve got to stay tuned for that. But there will be a baby eventually.

AX: Do you feel that Juliette found out the truth about Nick at the appropriate time story arc-wise?

GREENWALT: I think it was right on time. You’ve got to move things forward as people behave as they would in real life and you can’t keep them in the dark forever.

AX: When did you decide Monroe should have a regular girlfriend?

KOUF: Well, it was going to happen naturally. He met the right person on the show – she just showed up and there she was.

GREENWALT: Yeah, she’s such a doll, and their thing together was so moving and so touching. So they’re going to have some ups and downs this year, but they will be definitely growing closer.

AX: How much time does Season 3 cover? There was literally no elapsed screen time between the end of Season 2 and the opening of Season 3.

KOUF: It covers an almost-normal gestation time, this season.

AX: Does Renard consider himself to be Wesen? He says “them,” but he also says “us.”

GREENWALT: Renard belongs to whatever club is the most advantageous at the moment, because he’s Royal, don’t forget. And the fact that he is part Royal, part Wesen, part quote-unquote “normal” will come into play this year quite a bit as he tries to help the Resistance coalesce.

KOUF: I’m not sure that Hexenbiests are exactly like Wesen, because I don’t think – I mean, you can lose your Hexenbiest power, but you can’t stop being a Blutbad.

AX: Why wasn’t Nick able to detect earlier that Renard is part Hexenbiest?

GREENWALT: It’s because Renard has never morphed in front of him. It’s very hard – Renard has incredible control and only morphs in the most exigent of circumstances. And [Nick] can only tell when they morph. He can’t tell if they don’t morph. He can’t smell a Wesen. Almost always what happens is, they morph and then they see Nick recognize them, and then they realize they can be seen, and ergo, he must be a Grimm.

AX: They don’t think he might be another Wesen?

GREENWALT: No, because he doesn’t morph in the situation; he remains human.

AX: Since Renard doesn’t morph often, do other Wesen know that he’s a Wesen?

GREENWALT: No, but some know of him by reputation. Some know he’s this prince and all of that, but not everybody knows who or what he is. That’s pretty guarded.

AX: What’s the relationship with Nick and Renard like now, going forward?

GREENWALT: I think [James Frain, who plays Eric] is going to be on SLEEPY HOLLOW, so … You never know on our show. But we’ve got a great actor, Alexis Denisof, coming in to take that [antagonistic Royal] role, terrific guy.

AX: How much will we see of him?

AX: Will the Nick/Monroe friendship have any speed bumps?

GREENWALT: There are going to be some issues. How much Nick uses him, howMonroe feels about that, are you really close to your friends or is it a thing of convenience? That issue will be raised a little later this season.

AX: Are Nick and Juliette past the awkwardness of him having waited so long to tell her he’s a Grimm, her being bespelled and entranced with Renard and now Nick occasionally losing his pulse?

GREENWALT: It’s sort of like having an affair. They’re kind of mended, but you can’t always … And then as she sees Monroe and Rosalee growing closer and closer, she will be saying, “Hey, pal.”

KOUF: Yeah, there’s a ring upstairs in the sock drawer from Season 1.

AX: Is there going to be any kind of fallout from the Juliette/Renard thing last season, or is everybody going, “Eh, never mind” now?

GREENWALT: She gets to slap him every once in awhile. She enjoys that.

AX: Will Nick’s mother be coming back?

AX: Is there any chance that the group around Nick might expand further?

KOUF: Yeah, we got enough of a group around him. [If there are any more people], everybody’s going to get one line of dialogue. But there are going to be some people coming toPortland that are going to upset the apple cart.

AX: Is Sergeant Wu, played by series regular Reggie Lee, ever going to find out about Wesen and that Nick’s a Grimm?

GREENWALT: Well, that’s a good question. Sergeant Wu is going to have a very tumultuous episode in which he’s going to see some things that can’t be explained, but we certainly have enough people knowing.