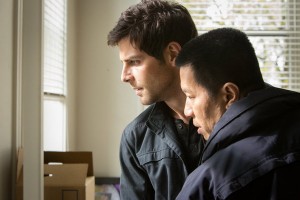 At this point on GRIMM, now in its third season Fridays at 9 PM on NBC, almost all the main characters know that Portland,Oregon police detective Nick Burkhardt (David Giuntoli) is a Grimm. A Grimm is someone who can see (and if need be fight) Wesen, supernatural beings who can appear to be and live as humans, but who also have animalistic forms and idiosyncratic social structures. By now, Nick’s girlfriend Juliet (Bitsy Tulloch knows), Nick’s police partner (Russell Hornsby) knows, Nick’s part-Wesen police captain (Sasha Roiz knows) and Nick’s best friend, werewolf-like Wesen Monroe (Silas Weir Mitchell), knows. EvenMonroe’s Wesen herbalist girlfriend Rosalee (Bree Turner) knows.

The only series regular character who doesn’t know that Nick is a Grimm – or indeed that Grimms and Wesens exist – is Portland PD Sergeant Wu, played by Reggie Lee. Wu isn’t unobservant or slow on the uptake; arguably, he’s got the sharpest tongue in the whole department. He just hasn’t been in a situation where he’s full-on seen a Wesen, though Lee hints that may change soon.

Lee, originally from Quezon Cityin the Philippines, worked with GRIMM costar Mitchell before when both were regulars on PRISON BREAK. Lee goes back and forth between film and TV roles – he was in the first iteration of THE FAST AND THE FURIOUS, appeared on BABYLON 5, was in TROPIC THUNDER, PIRATES OF THE CARIBBEAN: DEAD MAN’S CHEST and PIRATES OF THE CARIBBEAN: AT WORLD’S END and had an arc on NO ORDINARY FAMILY. He appeared in three features last year, including THE DARK KNIGHT RISES as Gotham City police officer Ross.

Most of Lee’s characters are serious, villainous or both, which doesn’t describe Wu. At a party thrown by NBC, Lee talks about his GRIMM change of pace role.

ASSIGNMENT X: When you got this part, were you happy to be playing somebody who is relatively upbeat and a decent person?

REGGIE LEE: Well, you know, what’s interesting is, this guy is very sarcastic. They’ve come out with t-shirts that say “Wuniverse” and “Wu-ify things” and “Wu-isms” and all this kind of stuff, which has been great. So I’m just having fun playing him. And it’s nice playing a normal person for once, especially for a minority character, which you don’t normally get. Usually, you’re pigeon-holed.

AX: Wu has been in scenes where Nick can see Wesen, but Wu doesn’t, right?

LEE: Very rarely. But I will tell you that Wu will catch a glimpse of Wesen in their morphed form.

AX: Do you think Wu can really be out of the loop forever?

LEE: No, I don’t think he can be out of the loop forever. It’s something that – who knows. Hopefully, we’ll go many seasons and it’ll be a slow burn. They have to do a slow burn, because if everyone knows … I mean, there are teasers of me seeing things, so who knows what that may lead to, but I’m excited to find out how I’ll react to it.

AX: Is Wu going to get any kind of a personal life?

LEE: They have teased to me that you will find out more about his family, and where it goes from there, I don’t know. I’m excited. Who knows what that will bring, but I think it has to happen somewhere. They have asked me about Filipino fairytales and Chinese fairytales, because I’m half of both, so they’re interested in doing something like that. So we’ll see what happens.

AX: Is there a childhood bogeyman of yours that you’d like to see turn up as a Wesen?

LEE: You know what? As a kid, Pinocchio always scared the sh*t out of me. Seriously. I mean, that wooden dude. I grew up in the Philippines, it was always told to us, but there was always something a little freaky about it, and they haven’t done a Pinocchio episode yet. So who knows.

AX: In Season 2, there was a lot of talk about the sex scene that required a stunt coordinator. You weren’t part of that …

LEE: [laughs] Could you imagine? Wu with Juliet. We’ve been teased on Twitter about that, very much. A Wuliet scene.

AX: Do you have a favorite GRIMM episode, either experientially or as a viewer of GRIMM?

LEE: The episodes where I got sick [from supernatural causes] in the first season. Those were so much fun to do. I want more of that stuff.

AX: You had to wear prosthetics to show the effects of the disease. Where those the heaviest prosthetics you’ve had to deal with as an actor?

LEE: Yup. I mean, that was where I had to fall asleep in the chair for three hours, because they had to [take that long to apply the makeup].

AX: GRIMM is not only set in Portland, but it shoots there. How is it working in Portland?

LEE: I love it. We all love it. We love Portland. And Portland seems to love us, which is really great – they’re very appreciative.

AX: How was the experience of working on DARK KNIGHT RISES?

LEE: I got that right before I came to do GRIMM, and they said, “Christopher Nolan just wants to offer you this role, to play Joseph Gordon-Levitt’s partner.” Another cop, of course [laughs]. But it was great. They flew me out toLondon and it’s on a humongous scale. Christopher Nolan works very fast and you wait forever and a day, but when he starts to shoot, you are there for literally ten seconds. And if you don’t have your crap together, he moves on. So it’s great working with him – he knows what he wants.

AX: When you were working on the film, did you know what the end result was going to look like, or did you look at the movie going, “I had no idea that’s how it was going to turn out”?

LEE: I had no idea. [Nolan] shoots in these humongous warehouses, where he shot INCEPTION, where they housed these humongous sets, and things are supposed to come crashing down with a million cops, and you don’t know what they’re going to look like. So it was great.

AX: How was it going from the DARK KNIGHT RISES cop to the GRIMM cop?

LEE: [laughs] I think Year of the Cop on the Chinese Zodiac is not supposed to exist. So I’m hoping that’s done with except for GRIMM. I love playing this cop, so hopefully this will last for awhile.

AX: How does GRIMM fandom compare with PRISON BREAK fandom?

LEE: PRISON BREAK fans are still going strong. They really are. Especially when Silas and I see things – Silas will denounce Twitter for ever and a day, but I get a lot of PRISON BREAK stuff going on. So this [GRIMM fandom] is starting to build. PRISON BREAK – that train was already rolling when I came in. It’s interesting to be on a train that’s starting to chug, so it’s nice to be on it as it builds, and it’s crazy seeing the fans.

AX: Have you been involved in any genre production similar to GRIMM before?

LEE: Not like this. I mean, certainly I’ve done a lot of action stuff, and I just did THE DARK KNIGHT RISES, and that’s genre, but on a film level. But this is ongoing. [GRIMM co-creators/executive producers] Jim Kouf and David Greenwalt do it really well.

LEE: No. Well, I went through three movies last year [available on home video and VOD]. DARK KNIGHT RISES, SAFE with Jason Statham and also HERE COMES THE BOOM with Kevin James, which was in the theatres for about a month.

AX: Did you play a teacher in HERE COMES THE BOOM?

LEE: I played Charise’s father. Do you know who Charise is? She’s a singer. It’s the first time I’ve ever played a Filipino, and I’m Filipino. I played a father for once. They had to gray my hair. But all of these are wonderful straight offers and it’s always great when you get to that point in your career. So I’m excited.

AX: What would you most like people to know about GRIMM at this point?

LEE: That it’s an incredibly relatable sci-fi show that has a lot of stuff coming.