out of the furnace movie review 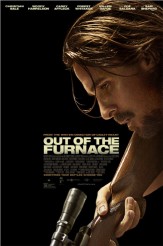 ©2013 Relativity Media
OUT OF THE FURNACE movie poster
Reviews

Movie Review: OUT OF THE FURNACE

An action drama that confuses quiet with introspection

OUT OF THE FURNACE is a film that seeks to pull deep meaning out of what feels like the closed-ended plot of an episode of a cable series, like JUSTIFIED or BOARDWALK EMPIRE. It is meant to be a heartfelt tale of loss and revenge, but despite some fine performances, the characters are underwritten. There’s only so much emotion we can feel when symbolism rather than specifics are everywhere we look, and when we can guess early on – because we’ve seen this general story many times before – pretty much what will happen.

We’re introduced to small town big fish criminal Harlan De Groat (Woody Harrelson) as he verbally and physically abuses his date at a drive-in movie, then beats up a stranger who tries to intervene.

De Groat’s path will eventually cross with those of the Baze brothers. Russell (Christian Bale) has a great girlfriend (Zoe Saldana) and a steady job at the Braddock, Pennsylvania steel mill. Younger brother Rodney (Casey Affleck) doesn’t want to go into the town and family business, so he joins the U.S. Army. Russell has a major setback, and when Rodney returns from four tours of duty, bare-knuckle fighting seems more appealing to him than mill work.

We can guess everyone’s trajectory more or less, not because there’s a sense of real-life inevitability to characters and events, but because the set-up is, to put it kindly, traditional. Director Scott Cooper and his fellow screenwriter Brad Ingelsby have set themselves a hard task by attempting to create deep characters who define themselves through actions much more than through words. With De Groat, the filmmakers and actor Harrelson give us a major Big Bad, but while he’s formidable and lethal, nothing the character does matches the creepy originality of his introductory scene.

Bale’s Russell is a prototypical Western hero, even if he’s in the contemporary urban American northeast. Bale plays Russell with conviction and feeling, but the context around him doesn’t resonate the way that seems intended. The incident that sends his life off-kilter is so bizarre that for awhile, it seems like it’s intended as a set-up rather than a genuine accident. We also don’t get much sense of what makes the mill different from any other form of organized manual labor, whether Russell and his uncle (Sam Shepard) have any feelings about the job and so on. Russell is so set up as a man with nothing to lose that he doesn’t have much going on to give him dimension.

Affleck as Rodney has a kind of dangerous bravado that makes him credible as someone who would turn to bare-knuckle fighting as an income-earning job, but he is introduced as being already so troubled and angry that he doesn’t seem to have been made more so by his years at war.

There is something intriguing about New Jersey, where De Groat and his cohorts reside, being held up as a terrain filled with backwoods depravity, as opposed to a hotbed of SOPRANOS-style crime. However, since the characters in OUT OF THE FURNACE are at home in this geography, none of them have the kind of perspective that allows them to notice anything interesting or ironic about this. The filmmakers don’t do anything to make their rural criminals much different from other rural criminals of various films and television, nor do they give Russell the makings of a moral crisis. What we’d expect to be time building up to some sort of internal revelation is just time.

In fact, the most intriguing figure in the film is the police detective played by Forest Whitaker, a man who knows he’s in a difficult position but is still trying to do the right thing. As an archetype, this is nothing especially new either, but Whitaker fills in the blanks in ways that make us interested in his story.

OUT OF THE FURNACE seems to be striving for the balance of action and introspection found in a lot of classic ‘70s indies. What it achieves instead is a well-cast, slow-paced piece that has action and angsty quiet, which isn’t the same thing.