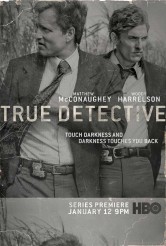 The series creator talks closed-ended seasons and darkness vs. hope

HBO’s TRUE DETECTIVE, Sundays at 9 PM, was created by Nic Pizzolatto to be a standalone eight-hour story. If there is a second season, a la AMERICAN HORROR STORY, the characters, setting and perhaps even era will be different. Season 1 gives us Woody Harrelson and Matthew McConaughey as, respectively,  Martin Hart and Rust Cohle, two very different detectives in rural Louisiana who try to find a ritualistic serial killer back in 1995 and then revisit the case seventeen years later.

Pizzolatto, who originally hails from Louisiana, is an award-winning novelist and short story writer. His scriptwriting experience prior to TRUE DETECTIVE was on the first season of the U.S. version of THE KILLING.

Pizzolatto is part of a Q&A panel that HBO hosts for the Television Critics Association. Afterwards, he is briefly available for some follow-up questions.

“You know,” Pizzolatto says, “when everybody started talking about the darkness of the show, and it kind of has a relentlessness to it, I think while the show is interested in taking the audience toward a kind of heart of darkness, and it’s an existential one, it is just as concerned with understanding how people wait out the darkness with strength and hope and love. And I know you don’t see that in the first four episodes, but I think if you stay with it, there’s much more than darkness happening here.”

On the panel, Pizzolatto explains why he conceived TRUE DETECTIVE as a show that would have one completely closed-ended story per season. “One of the reasons I wanted to do an anthology format is, I like stories with endings. I like a good third act. And continuing serial dramas, they tend to have really good beginnings and really long middles and then sort of have to hustle to develop an ending. I like the idea of telling a self-contained story.”

As to how he came up with the idea for the story behind the first season of TRUE DETECTIVE, Pizzolatto says, “I was pretty steeped in a lot of police research at the time, because I was working on what was going to be my next novel. I had this idea for a novel that was going to be entirely two first-person voices trading stories, and they were going to be partners. And when I just sat down to start fooling around with it, I started writing in Cohle’s voice first. I think three sentences into it, he said his partner invited him for dinner, and then he knew he was going to have a drink. And I was like, ‘All right, guy. I’m just going to follow you, whatever you have to say.’ And he just sort of emerged fully formed. And then when working on the actual story that was going to contain these two men and the sorts of themes I wanted to touch on, I was also looking at breaking into TV, and I thought it could work really well as a television show, especially given the time shifts and that you have so many more signifiers with a visual medium that can help people track exactly where you are. So I played with it like that and I found, to me, it was its best form this way, that it was actually better suited [to television] than to a novel.”

If there are more seasons of TRUE DETECTIVE, Pizzolatto says, “I think in a concrete way you can count on, if we get to do it again, the setting would be a major character, along with our leads. We’re generally concerned with the places that don’t get much press and where you wouldn’t normally set a television show. I mean, everybody’s setting everything in Louisiana right now, but we’re not in New Orleans; we’re all along the Gulf peninsula. And I think, in some form, the series would always retain an aspect of a story being told, both because it lends itself to the idea of an investigation, and it ives great actors chances to simply account for their characters. And that might go back to my love of theatre and the monologue, but I think there’s a way to organically incorporate it. It wouldn’t necessarily occupy the entirety of the story, but this idea of an objective truth versus a spoken truth is something, I think, that provides a great deal of tension and it’s one of my governing curiosities.

“Beyond that, I tried to make the format as broad for my tastes as possible in the sense that, yes, this is almost the TRUE DETECTIVE version of a buddy cop movie hunting for a serial killer. And in that way, it even touches on a lot of those tropes while, I hope, subverting and making them entirely new through the character work. And there could be a season that’s much more of a widespread conspiracy thriller, a season that’s a small-town murder mystery, a season where nobody is murdered and it’s a master criminal versus a rogue detective of something. Even the title TRUE DETECTIVE is meant to be, of course, purposefully someone generic before you even get to the deeper indications. The word ‘true’ can also mean honorable and authentic and things like that. But all the previous incarnations of anything titled TRUE DETECTIVE were anthologies, right? So as long as there is some crime in there, I think the series format can approach it. I mean, theoretically, you could tell [William] Faulkner’s ABSALOM! ABSALOM! as a season of TRUE DETECTIVE, because it’s told as a mystery story.”