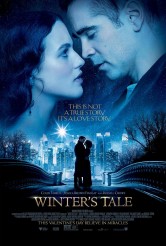 Even since Mark Halprin’s novel WINTER’S TALE was published in 1983, people have been trying to adapt it for the screen. Now it’s 2014 and writer/director/producer Akiva Goldsman has made a movie from the book. If the film is any indication, we can see why it’s taken so long, because the results are at best problematic, albeit beautiful to look at, courtesy largely of Caleb Deschanel’s cinematography and production designer Naomi Shohan.

In a prologue set in 1895, two married refugees who want to emigrate to America are turned away at New York’s Ellis Island due to the husband’s failing health. Wanting a better life for their infant son, the couple puts their baby in a miniature boat so he can sail back to New York Harbor. In 1916, the baby has grown up to be Peter Lake (Colin Farrell), an accomplished thief who has angered his erstwhile boss, Pearly Soames (Russell Crowe). Peter is rescued from a fatal beating by the timely appearance of a white horse. The horse helps Peter evade capture, but when the thief wants to flee Manhattan, his steed instead deposits him in front of a mansion.

Within the mansion is Beverly Penn (Jessica Brown Findlay), a lovely twenty-one-year-old who is dying of non-contagious consumption. She is alone in the house at present. Peter comes upon her and falls in love before a first cup of tea. Beverly falls in love as well. Pearly is determined that Peter shall have neither love nor life.

Due to flashforwards, we see that Peter somehow survives into 2014. His past experiences inform what happens to him in the present.

For the film to work viscerally, we have to fully believe in what the voiceover narration tells us – and we just can’t. It’s one thing for us to accept a fantasy playing field – “A long time ago in a galaxy far, far away” – but it’s another for us to be told what’s important, what’s not and why we should be happy about one outcome when the action so far has suggested that we were rooting for another. It’s also an issue when we’re told our lives work in a way that most people don’t experience.

There’s a further problem with Pearly’s motivations. We know he doesn’t like to be thwarted, but we are told rather than shown why he and Peter parted company. We do see Pearly’s interactions with his master, which would seem to make him less inclined to pursue Peter rather than more eager. We accept that Pearly is malevolent, but he’s no Javert from LES MISERABLES (Crowe in the role notwithstanding); he seems to be determined because the plot requires it, not because something has happened to make him want to risk everything for vengeance.

Then there’s the present-day storyline, which evidently requires more voiceover explanation if we’re to buy into why it matters. This just reinforces that the story is having trouble standing on its own.

Farrell gives a nicely emotional performance, Brown Findlay is appealing and Crowe is suitably menacing. The horse (simply called Horse by Peter) is an absolute scene-stealer.

WINTER’S TALE is gorgeous and weird and something of a mess. It is original and memorable for both its tableaus and its gonzo storytelling, but it’s neither moving nor much fun.