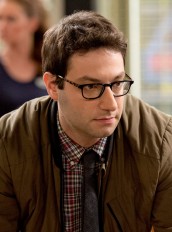 TBS’ half-hour multi-camera comedy MEN AT WORK is now in its third season, Wednesdays at 10 PM. Created by Breckin Meyer (star of TNT’s FRANKLIN & BASH) and based on incidents in his own life, the series stars Adam Busch, Michael Cassidy, James Lesure and Danny Masterson as a quartet of friends who work together at a New York men’s magazine. 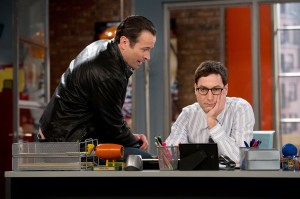 Busch’s character Neal is the gentlest of the bunch. Busch began his acting career at an early age, costarring in THE MYSTERY FILES OF SHELBY WOO. The Long Island native also appeared in Seasons 5-7 of BUFFY THE VAMPIRE SLAYER as homicidal nerd Warren, was a series regular on THE JURY and POINT PLEASANT, and is currently part of the ensemble on the Web series MYMUSIC. Busch also co-directed (with Amber Benson) the comedy science-fiction romance feature DRONES. As a singer/songwriter/musician, he continues in the band Common Rotation, which is next playing live at Little Joy in Los Angeles on February 25.

During a TBS-sponsored set visit for the Television Critics Association to the soundstage where MEN AT WORK shoots, Busch takes a seat on a couch in the magazine office set and talks about working with the other men on this show.

AX: MEN AT WORK is in its third year now. When you were first cast, did you have a sense it had legs, or did you just think, “Okay, let’s see what this is?”

ADAM BUSCH: I knew there was something special with us four [actors]. That’s the only thing I can say I knew, from first table read. I was booked the day of the table read, and I was mixing I think a Dan Bern record with [Jon] Griffin in Eagle Rock, and they called and said, “The good news is, you got the part. The bad news is, you’ve got to head over there right now for a table read.” It’s like five o’clock on a Friday and I’m in Eagle Rock and I’ve got to get over to Sony. So I got in the car and I drove and I had a baseball cap on and my stubble and stupid jeans. There was a kid waiting downstairs to walk me up. We sat down and it was a big table, and all the actors were on one side. Everybody was already seated – there was one empty seat. I walked in, sat down and they said, “Go.”

So I didn’t even meet [the other actors] or say anything, or even get to really look at them. As soon as we started, there was just an electricity in the air. I remember some of the execs said, “That’s the best table read we’ve ever been to.” And it was. There was just something special. And it continued like that. It hasn’t gone away. Regardless of how you feel about sitcoms or the genre, when I watch us, I can see the chemistry. I can see us laughing at each other within the scene. I can see us relating to each other in real ways. We’re all very different guys, but we get along really well.

I don’t know if we would have found each other without Breckin casting us. You know, Danny and I are both from Long Island. We never ran into each other. We were both child actors from the same town, auditioning for essentially the same stuff – never met. Now, we’re best buddies, but it never would have happened unless this show happened. So that’s a really unique thing. There are multi-camera guys who have been on this job since ARCHIE BUNKER’S PLACE. Regardless of what they think of the show or they think of the format, they’ll pull me aside and say, “You know, this is a really unique situation happening here. You guys all get along and there are no divas and there are no assh***s, and that’s not how it normally is. That’s very lucky.” Michael McDonald from MTV is our director this week – he said the same thing. Third day in and he’s like, “It’s really weird that there’s no …” I’m like, “I know. It’s really weird. We all just get along and like each other, we all have the things we’re good at, and in terms of promotion or whatever assignments fall onto the four of us, we all know who’s going to do what and who’s good at what, so it’s just working.”

AX: So they didn’t do a chemistry read with you before you were cast?

BUSCH: No. And I remember, I was really nervous about it. Because I was unshaven, my cap was to the side, I remember thinking – I made a comment to Breckin later – “Boy, I really showed up looking like s*** for that table read.” He was like, “Yeah, everyone thought it was really cool. You were just like, ‘Yeah, whatever, all right.’” But it wasn’t intentional, it was [soft scream], “I’ve got to get across town!”

AX: Neal is the “sweet” member of the quartet. You’re not often cast as a sweet person. Is it a relief to play someone like Neal, is it a challenge …?

BUSCH: It’s a challenge. And that’s what’s great about having Breckin there. We got to work with Ed Asner, and we did a whole episode together. It was just him and I, which was just a dream for me. I leave my bag on a park bench and he finds it and becomes my intern, for which he’s not qualified in any way. And he keeps looking at my computer and I tell him to stop looking at my computer, and he has a tag at the end where he says to me and Danny, he’s like, “You know, that guy looks at a lot of po*n.” And Danny and I weren’t even looking at each other, he’s behind me, Ed’s facing me, and he goes, “This guy looks at a lot of po*n.” And [Busch and Masterson] both, without ever having discussed it or rehearsed it, go [shrugs], like, of course we do. And it got a big laugh, it was very funny.

Breckin came over and said, “I don’t think Neal would be proud of that.” I was like, “What are you talking about? These are my guy friends. We’re all guy friends – I think we would all talk about po*n if we watch it, and I think we’d be pretty comfortable with it.” He said, “I don’t think Neal would – I think Neal would be embarrassed.” And I thought about it, and then we did it, and [Asner] said the line, and I was embarrassed and the audience went crazy. It was like, yes, agreeing is funny, but being ashamed about it is Neal, and that’s what the audience relates to even more, so I learned a lesson that day. My instinct isn’t always [correct]. it was Breckin who said, “Neal would be embarrassed.” I was like, “Why are you removing something that’s funny and replacing it?” It got an even bigger laugh, because he was right. That’s in keeping with the character, and that’s the best part of the show, is when [the audience is] laughing and I don’t know why, because it’s not just a one-liner or a clever set-up. They’re laughing at these characters developing and watching the story unfold, and they’re laughing as that goes on. So they know me almost better than I do sometimes and they know Neal would be embarrassed by that.

AX: And does it help that your boss/series creator/show runner is an actor himself?

BUSCH: Oh, yeah. He knows the language, he knows how to tell us what he wants – it’s very specifically his vision. The sense of humor that he has is very much his own. And the closer I can get to it, the better I think the show is.

AX: Breckin Meyer also mentioned that MEN AT WORK gets a lot done with a relatively low budget …

BUSCH: In the episode [“Post-Posal”], I propose to my girlfriend with the help of Lance Bass of ‘N Sync who shows up, and he plays piano for us and sings. As a joke, for rehearsal, while he went to play, the first thing he did was [sings intro to CHEERS theme] from CHEERS and everybody laughed. But everyone was like, “Ha-ha, that’s very funny, but you know we can’t afford that, so you can’t even …” But when you watch the episode, you’re going to see that whatever he plays is a variation of the CHEERS theme, just disguised, so we don’t have to pay for it.

BUSCH: There’s the Web series MYMUSIC for the Fine brothers [Benny and Rafi] that I do. We’re still shooting that, Season 3, and there’s a film I did called HAPPY BABY that I did for the author Stephen Elliott. That’s Mick Sweeney’s first movie, which is going to be really fun. I play a character named Petey.

AX: Is there anything else you’d like to say about MEN AT WORK Season 3?

BUSCH: [laughs] I can’t stop talking about how much I love those guys and I just want it to run forever.