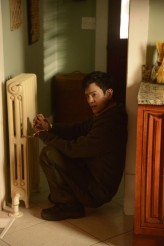 Energetic, with good suspense around what the characters will and won’t do 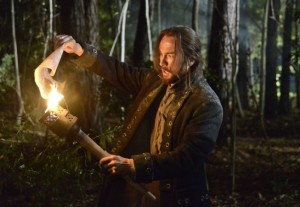 In “The Indispensable Man,” the first episode/half of SLEEPY HOLLOW’s first-season finale, we’ve got Ichabod (Tom Mison) and Abbie (Nicole Beharie) grappling with temptation and mistrust due to a map, and Captain Irving (Orlando Jones) horrified by the fact that his thirteen-year-old daughter Macey (Amandla Stenberg) is suspected of a murder she committed while possessed.

Andy Brooks (John Cho) appears to Abbie and tells her that his master Moloch (Derek Mears) doesn’t really want George Washington’s copy of the Bible – Moloch wants a map that points the way to Purgatory, and the Bible shows how to find the map. Andy swears that if Abbie gives him the Bible, she’ll be safe. He also reminds her of the prophecy that one Witness (Abbie and Ichabod are the Witnesses) will betray the other. Then Andy throws Abbie for a loop by saying he loves her. Abbie refuses to give up the Bible.

When Andy sees Moloch, the demon causes insects to enmesh the unfortunate deputy in a web. Andy later emerges from the cocoon transformed into a demonic being, though vestiges of the man remain.

The Bible leads Ichabod and Abbie to a set of rosary beads buried with the late Reverend Knapp (Patrick Gorman), who was a Mason who managed to survive from Washington’s day, until he was killed by the Horseman. Since the beads are cursed, our Witnesses bring in sin eater Henry Parish (John Noble), who is first injured by the beads, then attacked by demons at the gravesite.

Abbie is concerned that if they find the map, Ichabod will use it to try to free his wife Katrina (Katia Winter) trapped in Purgatory. She goes so far as to voice her worried about the betrayal prophecy to Henry, who reminds her that the prophecy was not included in the Bible because the people transcribing the Bible didn’t believe it.

Ichabod, Abbie and Henry track down Washington’s hidden tomb, where the Andy demon attacks them. Abbie says she’s sure Andy is in there somewhere – he comes to the fore and begs Abbie to release him. She stakes him through the head. Ichabod removes the map from the grasp ofWashington’s skeleton. The Andy demon revives but is caught by a booby trap.

Outside the tomb, Ichabod says he cannot betray the world and Abbie’s trust for the sake of the possibility of releasing Katrina and burns the map. Later, however, Ichabod when alone recreates the map, thanks to his photographic memory.

Back at police headquarters, Captain Irving is appalled when his daughter is brought in for DNA testing. Since Irving knows the DNA will match what was found on the dead priest’s neck and he doesn’t want his innocent thirteen-year-old daughter charged with murder, he confesses to the crime.

This last is worrying – how will Irving get out of this? Are we going to lose Jones from the cast? Please, no … It also seems like Irving might want to check out who killed the other victim at the house (Detective Morales murdered a fellow officer while possessed), but on the other hand, the character has been shown to be a very protective father, even without hellish menaces to his daughter.

The quest for the map is laid out as a nicely clue-laden puzzle. We learn, among other things, that George Washington was referred to as “the indispensable man.” We also get a good emotional back and forth, where we first think that Abbie is being too suspicious of Ichabod, then feel betrayed when our hero uses a technicality to thwart the meaning of the pact he’s just made.

The episode retains SLEEPY HOLLOW’s trademark humor, with Ichabod confronting the intricacies of cell phones. His tirade against carrier contracts as being an abuse of capitalism is a hoot, and the tip of the hat to his earlier phone contact with Yolanda is a welcome nod to the young series’ growing history.