Home » Being Human review That Time of the Month 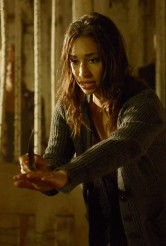 TV Review: BEING HUMAN – Season 4 – “That Time of the Month”

Startling imagery and developments are part of a good episode 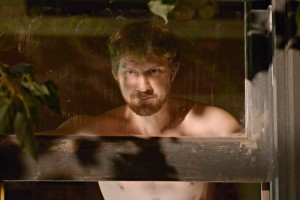 BEING HUMAN has a strong episode in “That Time of the Month,” as it has striking visual elements, several big plot twists and the added bonus of Mark Pellegrino’s Bishop showing up in flashbacks.

Ghost Sally (Meaghan Rath), aware that she’s come back from the never-never with some extra power, is able to dig up and carry a book of spells. Given that Sally is a ghost, being able to pick up and carry a physical object is a big deal for her. Despite the concerns of Aidan (Sam Witwer) that the magic is connected to witch Donna and therefore likely to cause something terrible, Nora (Kristen Hager) is so worried about husband Josh (Sam Huntington) being trapped in werewolf form that she tells Sally to go ahead. The ritual requires menstrual blood – hence the episode title, and true horror from Aidan – but Nora is able to provide this. The ritual also requires that Josh in werewolf form be stabbed in the heart.

Aidan stabs Josh, but the result seems to be a dead werewolf and a vanished Sally. Just when Nora and Aidan are heartbroken and blaming themselves for doing something boneheaded, Josh’s hand appears in the dead werewolf’s mouth. Aidan and Nora cut Josh out of the lycanthropic corpse. Josh is bloodied and dazed, but seems otherwise healthy.

When Sally returns to the apartment, she tells Aidan and Nora that the spell wasn’t finished. They counter that Sally had vanished, there wasn’t anything else they could do and Josh seems fine. Josh is a little depressed and when he’s alone, we see why – when he looks in the mirror, his eyes glow a wolflike yellow.

Meanwhile, Aidan’s wife Suzanna (Katharine Isabelle) from his human days appears. She’s a vampire as well. In flashbacks, we see that Bishop turned her after she apparently drowned, so that she could be with Aidan. Given that Aidan hasn’t seen her and has believed she was dead all these centuries, he wants to know what happened. Suzanna tells Aidan that their orphaned son Isaac lived to become a grandfather. She blames Bishop for separating her from Aidan, but is strangely reluctant to spend time with her husband.

Only knowing that Suzanna is behaving strangely, Aidan comes home to find human girlfriend Kat (Deanna Russo) in his bed. He tells her he loves her.

A further flashback shows us what really happened. Newly turned, Suzanna was starving and drained the first human she came across. Alas, this human was Aidan and Suzanna’s young son. Bishop is genuinely saddened, but will not bring the child back as a vampire. He suggests Suzanna leave, as finding out what happened will destroy Aidan.

Characters on BEING HUMAN have been known to keep secrets for less than valid reasons (like sulking), but in Suzanna’s case, it seems wholly understandable. Even with all of the vampire lore and incident crowing the airwaves nowadays, her bloodlust murder of her (and Aidan’s) child seems almost Shakespearean in its tragedy. Isabelle and Pellegrino make the follow-up reactions highly credible.

The flash of Josh’s hand reaching up through the wolf’s throat likewise provides a nice jolt, and we’re more and more curious to know what’s up with Sally. It’s certainly fun to see Rath celebrating her character’s ability to be tactile.

There’s also a funny flashback to Aidan and Josh’s first day as roommates and Russo remains fetching as Kat. The scene that the episode title refers to is actually fairly tame to watch, but a lot of viewers will doubtless squirm anyway, which is the point.

Altogether, “That Time of the Month” is a winner.