The French actress talks about working on the Fox thriller 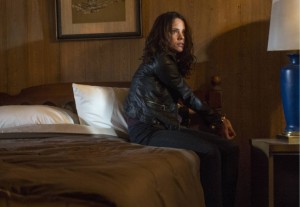 French actress Camille De Pazzis is on the red carpet at the world premiere in Hollywoodof the romantic comedy LUST FOR LOVE, currently available on Video on Demand and iTunes. De Pazzis isn’t in LUST FOR LOVE herself, but it’s produced by and stars Dichen Lachman, who costarred alongside De Pazzis in ABC’s submarine drama THE LAST RESORT.

“My friend Dichen and my friend Alessandro [Ongaro] did the movie, so I’m supporting them,” De Pazzis explains.

Right now, De Pazzis can be seen as Gillian, whom the actress describes as “the French girl – I’m a follower,” on Fox’s THE FOLLOWING, Mondays at 9 PM.

CAMILLE DE PAZZIS: I have Season 2 of THE FOLLOWING out on the screens, and I’m in the beginning of the pilot season.

AX: If you’re auditioning for pilots, does that mean your character doesn’t survive this season of THE FOLLOWING?

DE PAZZIS: Maybe I do! [laughs] But the shooting is done anyway.

AX: And did you have to learn how to do anything for the role?

DE PAZZIS: Oh, yeah. I had to learn how to fight and I wouldn’t hurt a fly, so it was not that easy for me, but I enjoyed it. I had a great team with me, and good actors as well, so that helped a lot.

AX: How did you enjoy working on THE FOLLOWING?

DE PAZZIS: I discovered Season 1 once I was already picked up for Season 2, and I was so proud, really, to be on that show, and I loved everything about it. The music, the actors are really amazing. I like everything – the way the camera moves, the lines. I enjoyed shooting it as well.