An average episode with character elements that don't quite jell 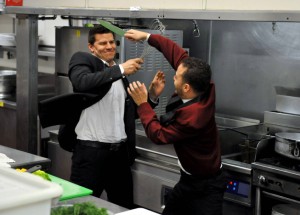 BONES often has its main characters figuring out something about their personal lives from what they experience on the job, but in “The Repo Man in the Septic Tank,” the elements don’t fit comfortably together. Brennan (Emily Deschanel) comes to an arguable conclusion based on an element of conversation with a temporary lab employee, Dr. Fuentes (Ignacio Serricchio). Booth (David Boreanaz) has a flash of concern so momentary that it barely qualifies as jealousy, which leads to a very loving speech on the part of Brennan, which in turn gets what feels like a proportionate under-reaction from Booth.

Dr. Fuentes is a Cuban refugee working at the Jeffersonian on behalf of the State Department. While he tries to curb his innate surety, he treats Brennan with a whiff of patronization. For once, her irritation seems entirely warranted. Furthermore, he flirts with her to an extent that qualifies as actual harassment (“I think we will make love soon”). Brennan points out that this is inappropriate. When Brennan relates the incident to Booth, he is a little worried – awhile back (before they were married), Brennan said she didn’t believe in monogamy. Brennan says she would never do anything to hurt Booth or their relationship; it would be like killing herself and she has no intention of doing so. She loves Booth. He cheers up.

The whole scene seems unbalanced. Wouldn’t Booth want to have a word with Fuentes, whose behavior would be out of line even if Brennan were single? And then, when Brennan pours her heart out, Booth’s reaction is essentially, “That’s nice.” A little reciprocity might not be needed by Brennan, but it would work for the viewers.

Meanwhile, Brennan and Booth have been arguing over whether their daughter Christine should attend church – Catholic Booth is for it and atheist Brennan is against it. When Fuentes explains that he’s an atheist, but he believes that his parents and grandparents should have had the freedom to believe, Brennan decides that it will be great for Christine to go to church and decide for herself about Christianity, albeit Brennan is sure that her daughter will see the religion as a myth. Having Brennan come to this conclusion via Fuentes about Christine’s religious education seems like a shortcut, as well as having this be yet another episode this season where Booth’s beliefs take precedence. This is supposed to be a relationship of equals, but for those keeping track of what happens whenever Brennan and Booth’s values conflict, it’s not playing out like one.

The case itself involves an ex-con working as a repo man (hence the title) who was trying to go straight, but was being forced by his parole officer to steal cars. The methods of detection – first determining that the perpetrator hit his head on a windshield, then tricking the parole officer into walking through an x-ray system that reveals subcutaneous particles from the accident – are actually intriguing.

BONES is a procedural and, as such, it’s good to see its mystery elements actually engage us. It’s just too bad the character beats in this episode aren’t as much fun as the clues to the crime.