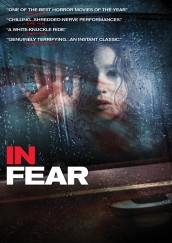 It’s hard to make any kind of a gripping movie with limited sets and very few cast members, but writer/director Jeremy Lovering succeeds with his debut feature, IN FEAR. Genre fans can relate elements of the scenario to a lot of other suspense/horror films, but IN FEAR works as an original, as well as an unexpectedly good character piece.

Scotsman Tom (Iain De Caestecker) and English Lucy (Alice Englert) have only been dating for two weeks when he persuades her to accompany him to a festival in Ireland. The event sounds like Woodstock, with people camping in tents. Tom has splurged on a hotel room for the night before the festival starts. The facility, which Tom found on a website, has advertised that it will send a vehicle to guide the couple in their car from a pub to the venue.

Trouble starts even before the hotel’s vehicle shows up, as Tom mentions to Lucy that he’s had a bit of a misunderstanding, now cleared up, with some men in a pub. Then what seems to be the hotel’s car shows up, but Tom loses track of it while driving. As Tom drives through a series of towering Irish countryside hedgerows, he and Lucy argue over whether they should follow the signs indicating the way to the hotel or the directions on Lucy’s GPS. They’re still driving when it gets dark and the situation gets considerably more frightening.

We don’t get much back story on Tom and Lucy beyond hearing a few phone messages from him, uncertainly asking her out. However, De Caestecker and Englert both provide a great deal of immediately recognizable human response to one another and to the increasingly dark predicament. We appreciate that Lucy’s exasperation takes the form of calm, pragmatic observation rather than shrieking annoyance (which is an option some other films would adopt), while Tom’s aspiration to project understated masculine cool and impress his girlfriend fans his growing embarrassment.

What’s especially admirable here, apart from the financial economy that should strike hope in the hearts of low-budget filmmakers everywhere, is the way Lovering keeps us engaged with the characters and their problems. There’s just enough ominous atmosphere to let us know things will go wrong, while the dialogue is relatable without ever trying too hard. Some horror movies give us people so callow, smug or simply underwritten that time spent getting to know them is torturous for the viewer. That’s not the case here – we feel like we’re along for the ride with actual traveling companions.

The hedge mazes project such a sense of ancient lurking danger that it’s probably wise to point out that IN FEAR does not enter WICKER MAN territory. This said, filmmaker Lovering shrewdly utilizes blind spots and misdirection – in large part, this is a horror movie about what happens when we’re not looking. IN FEAR should work even for viewers who work out what’s going on before the characters do; it’s still scary and nightmarish without becoming impossible.

There is a question of motivation that is not answered within the movie itself. There are hints, but by the end, something a little stronger would not have gone amiss. Otherwise, IN FEAR is the kind of tight, frugal, punchy indie horror thriller that gives the genre a good name.