Bones review The Source in the Sludge 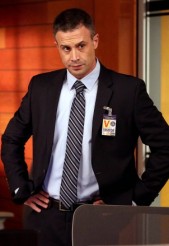 A good episode involving the CIA, terrorism and what Hodgins has in common with lampreys 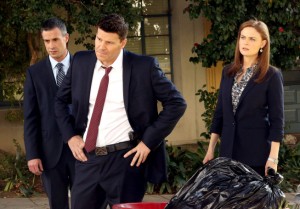 BONES makes its move to Mondays with “The Source in the Sludge,” a good episode that juggles the murder of a CIA source with Brennan’s (Emily Deschanel) annoyance about her life insurance police, Daisy’s (Carla Gallo) increased insecurities and, as a bonus, what Angela (Michaela Conlin) thinks her husband Hodgins (TJ Thyne) has in common with lampreys.

When the body of a young woman (Nazneen Contractor) is found in a case partially submerged in a lake, the Jeffersonian team soon identifies her as Sari Nazeri. A visit to the home of Sari’s brother (Homie Doroodian) brings Brennan and Booth (David Boreanaz) face to face with Booth’s old Army buddy and current CIA operative Danny Beck (Freddie Prinze Jr.). After some prodding from Booth, Danny reluctantly acknowledges that Sari was a source who helped the CIA identify a terrorist in Afghanistan, who was subsequently – at least, so Danny believes – killed in a drone strike. Danny arranged for Sari and her brother to be relocated to the U.S.

In fact, Sari’s brother wanted to move back to Afghanistan, even though logic suggests this would be suicidal. Unless, of course, the brother killed Sari to prove his loyalty to the terrorist cell. This doesn’t turn out to be the case, though. When Danny finally admits he and Sari were involved, suspicion falls on him, but the culprit turns out to be a former U.S. Army soldier (Chris Browning), who had served as a guard at the prison where the terrorists were being held. He killed Sari to make it look like the chief terrorist was still alive and active in the States – the man actually died in the CIA strike. Sari was kidnapped and held until she died of dehydration. The former soldier makes a deal with the CIA to turn over the terrorist network in exchange for his freedom. This enrages Booth and Danny, who find a way to get the man court-martialed.

Meanwhile, Brennan is irate that she has to pay more in life insurance than Booth does, as she is considered to be at greater risk in the field. Brennan finds this insulting. However, after she calms down and runs the numbers, she concedes that she has less field experience (and therefore is less able to prove her ability to defend herself) than does her partner and accepts the insurance policy as is.

Daisy is upset that she’s failed her oral exams and thinks the perfectionist Brennan will fire her. However, Brennan’s only concern is that Daisy is distracted – it turns out Brennan failed her own oral exams. This reassures Daisy greatly.

During the investigation, Hodgins keeps watch on a tank holding several lampreys (a species of toothy, fresh-water eel) in the hopes that their excrement will contain clues about Sari’s death. When Cam(Tamara Taylor) asks Hodgins why he doesn’t just cut the lampreys open, he says that they’ve survived three hundred million years of evolution unchanged. He can wait. Angela later observes that Hodgins has gone through so much – losing his fortune, finding out he has a mentally unstable brother – and yet hasn’t let it phase him. He and lampreys can take everything the universe dishes out and remain unchanged. She thinks this is sweet, and Hodgins likes the analogy.

In fact, this scene is arguably the episode’s best, even though the crime-solving aspect of the story would proceed smoothly without it. The whimsy, affection and science history lesson all come together in a perfect BONES moment.

We are provided with videos of Sari, who speaks of being in favor of education for women. The inspiration for her character seems to be Malala Yousafzai, the real-life young Pakistani woman who suffered a near-fatal attack by terrorists due to her support of education for herself and others like her. This is a worthy topic and Sari is a deeply sympathetic character, but the way her progression is depicted – first she’s a CIA source, then she comes to the U.S., then she speaks out in English about education – makes us wish we knew more about the back story. Was she already an education advocate who had problems with local intimidation before the CIA showed up, or did she start speaking out only after she came to the States?

Either way, it’s a good plot twist to have the motivation behind Sari’s murder be less about revenge than propaganda that uses the idea of revenge for myth-making purposes.

Daisy being neurotic is generally not much fun to watch, but having Brennan calm her down in matter of fact fashion works well. Having Brennan be “wrong” about the insurance, though, feels like one week too many where our protagonist is wrong about issues outside the lab and needs to be shown the light by her husband. Please let Brennan be right about something besides clues again soon.