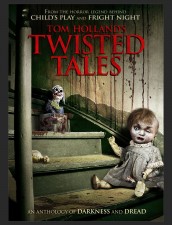 A horror anthology with stories that are brief and mostly fun

TOM HOLLAND’S TWISTED TALES began life last year as an anthology series on FearNet. Nine episodes have been gathered on DVD, with jocular on-camera introductions by writer/director/producer Holland (of FRIGHT NIGHT and CHILD’S PLAY fame). The segments are of varying lengths – the longest, “The Pizza Guy,” is approximately twenty minutes – and cover a whole spectrum of horror topics, from werewolves, vampires and Satanism to plain old non-supernatural revenge.

“The Pizza Guy” is perhaps the most fun of the bunch – it’s an extended standoff between a distraught young woman, her baffled friends and a fellow who may be either a curious young man who can’t quite bring himself to leave the weird situation he’s stumbled into or a minion of Hell. It’s amusing in a shaggy-dog way.

The segment dealing with the coming of Armageddon is worthy of THE TWILIGHT ZONE, with five people in a house with a potential shelter that can only hold two. “Bite,” about a brand of weed that allows its smokers to glimpse the future, gets bonus points for weaving together two different types of horror and “Mongo’s Magic Mirror” features the ever-urbane Ray Wise as a magician with a very unique prop.

The sensibility is solid scary story, without being as mean-spirited as, say, the TV series TALES FROM THE CRYPT. With Holland penning and helming all the episodes, there’s a tonal consistency that makes sure we get some gore and some punch each time around, but allows for some characters to be smart and humane (while others, through ignorance, petulance or outright villainy, orchestrate their own demises). All of the stories, save perhaps the final one, have plot twists (even though we can see some of them coming) and a sense of humor, though some work better than others. The last episode, “Vampire’s Dance,” doesn’t have enough narrative thread to really qualify as a story, though it does have Holland in the episode, commenting on the action. Acting throughout ranges from good to amateurish, while the special effects and makeup are commensurate with the tight budget – we get the idea but aren’t going to be wowed.

Because TWISTED TALES is broken up into its component segments, without any connective tissue, one can binge on all the episodes together (for a total of 142 minutes, including credits) or watch one or two at a time. They’re mostly undemanding horror fun that will make some older viewers nostalgic for the days when anthologies like this weren’t such rarities.