Home » being human review oh don't you die for me

The plot barrels forward in unexpected yet well-constructed ways 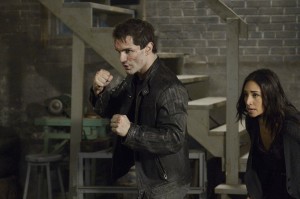 BEING HUMAN finds a way to honor what happened in Sally’s visit to the alternate past with what’s been set up in the main storyline in “Oh, Don’t You Die For Me.” Teleplay writer Mike Ostrowski uses the memories and powers of persuasion of Sally (Meaghan Rath) to make her extra alive time matter in the present, enhancing rather than contradicting the plot as it was established prior to the time travel incident.

Sally is trying to figure out how to get Aidan (Sam Witwer) to remember that they were in love – a tall order, since he never experienced the past where they were together. There’s also the usual atmosphere of constant crisis. Sally would like Josh (Sam Huntington) to talk Nora (Kristen Hager) out of leaving, but Josh can’t blame his wife for being afraid of him since he started to wolf out on her aggressively.

Josh tries to make his peace with the rest of the werewolf pack by showing them how he is – that he can become a wolf at any time, not just the full moon. At first, this seems to work wonderfully. The pack embraces and idolizes him, with even former bully Mark (James A. Woods) being friendly and complimentary. Josh briefly basks in their admiration – until he finds out that the pack’s brilliant idea is to get a wolfed-out Josh to scratch a bunch of humans to increase the number of local werewolves. Josh is horrified, saying that they’ve either done an awful job of explaining the situation to their “volunteers,” or else they’ve found a bunch of psychopaths who want to become werewolves. When it’s clear Josh isn’t going to help out of his own volition, he is caged and tasered into wolfing out.

Meanwhile, Sally finally breaks down and confesses to Nora that she’s in love with Aidan. Nora assures Sally that she must find a way to let Aidan know. In return, Sally says there’s no version of time in which Josh doesn’t pine for Nora and that Nora should give her husband another chance.

Aidan, meanwhile, is dealing with his wife Suzanna (Katharine Isabelle), who demands that Aidan kill his vampire “son” Kenny (Connor Price), who is now the head vampire in Boston. Although Aidan sees that Kenny is starting to sound like Aidan’s former vampire “father” Bishop in the ways he works, Aidan has promised to protect the younger fellow. When Suzanna tries to force the issue, Aidan confronts her with the fact that she is furious with him for forgiving her for killing their biological son Isaac when Suzanna was first turned. Suzanna won’t relent and Aidan reluctantly stakes her rather than let her kill him or Kenny.

The young werewolf who’s dating Kenny – yep, more werewolf/vampire romance – breaks away from the pack to tell Aidan, Nora and Sally what is happening with Josh. They rush to the rescue. Josh has been electrocuted and otherwise injured. Nora spirits him out of the pack house while Aidan takes on the human-form werewolves. When the outnumbered Aidan starts getting the crap kicked out of him, Sally begins possessing the pack members, so that their bewildered buddies are easy targets to be knocked unconscious. When it’s down to one big male werewolf – referred to in the credits as “Brick Sh**house” (Kwasi Sonqui), which suggests his build – Sally possesses him so that she can use his living body to kiss Aidan. Aidan experiences it as kissing Sally – we see it both ways (Sally kissing Aidan, the big guy kissing Aidan). Aidan may not remember the alternate past he didn’t experience, but he’s certainly now aware he has feelings for Sally.

Back at the house, Sally’s ghost is on a bed, unmoving and seemingly in a trance. All of her housemates are worried about her. Sally wakes up in the timeline where she saw the young girl being sacrificed.

One carp about the episode is that this last plot strand – the ghost and the mysterious identical survivor – has been left dormant for so long that a refresher course may be necessary to grasp all the nuances now that it’s back.

However, in other respects, “Oh, Don’t You Die on Me” is delightful. Josh, so often in judgment on Sally, declares that his love life is not worth Sally being banished to the past. Sally and Nora are great fun doing their friends thing and the Aidan/Sally/Brick Sh**house kiss is excellent. Kudos to Sonqui for channeling Rath so tenderly and determinedly.

There are other wonderful moments as well. Aidan insisting on forgiving Suzanna for Isaac’s death, even unto her end is very touching and Isabelle gives us the pain and self-loathing that allow us to understand Suzanna’s contradictory behavior. Prior to the kiss, Sally also gives Aidan a speech about the kind of woman he should be with that’s very charming. The werewolf pack’s infection plan is suitably self-serving, while also being relatively new in werewolf storytelling across the tube. Additionally, it’s a pleasure to see Josh get self-righteous about something where we’re on his side for once – his incredulous reaction to finding out what the pack expects him to do is a strong character moment.

“Oh, Don’t You Die For Me” reminds us how much we like these people and how sorry we’ll be to see them go when BEING HUMAN wraps for good in a few weeks.