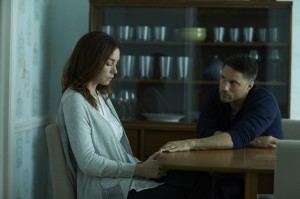 In Sundance TV’s limited series THE RED ROAD, Julianne Nicholson plays Jean Jensen. Jean is married to sheriff’s deputy Harold Jensen (Martin Henderson), is the mother of two daughters and lives in a small town in the Ramapo Mountains, where the citizenry coexist with the Native American tribe whose community is up the hill. Jean is so ashamed of her schizophrenia that she’s pretended to have a drinking problem, but her secret starts to come unraveled after she is involved in a hit-and-run. Her husband Harold winds up conspiring to cover up the incident with lately-returned ex-con and former high school classmate Phillip Kopus (Jason Momoa).

At a Q&A panel Sundance TV holds for the Television Critics Association, Nicholson says of Jean, “It’s the hardest role I’ve ever played – also the most exciting.” After the session, she remains available for some follow-up discussion.

ASSIGNMENT X: Is Jean aware of what she’s done at the time it happens?

NICHOLSON: She swings back and forth. And then she doesn’t know for sure she’s hit a kid. I think that night she’s convinced herself it was something else. As we go on, she questions it. And I don’t want to give anything away, but it’s a question that she’s not [sure of].

AX: Do the doctors try different medications with her? Do you play the effects of those medications?

NICHOLSON: You don’t see that. [The doctors] do, but we don’t see that on screen. There’s an accelerated testing of drugs and things like that over the time that she’s in that facility. She keeps getting pushed – she’s improving, but it doesn’t mean she’s okay. Things around are not making it easy for her. Just because she gets level with meds, she’s still being challenged.

AX: Is there more story for your character Dr. DePaul on MASTERS OF SEX? We know she has terminal cancer …

NICHOLSON: I don’t know. They haven’t started filming yet, but I hope so. I think so. There have been discussions. Dr. DePaul – sadly, in those days, there’s no getting over the cancer, but we might spend a little more time with Dr. DePaul.

AX: Have you enjoyed playing Dr. DePaul in the Fifties, back when there weren’t many women doctors?

NICHOLSON: I love television, because you’re given the first script, and maybe you’ll have a conversation with the creatives [that provide] a roundabout idea of what’s to come, but it’s so fun to discover deeper things about each character as you go from week to week. I love that she is so strong and confident and she is kind of mean in that world, before she gets to know people. I love someone who’s not trying to get people to like them, who’s not trying to be nice. That can get cloying, I think, and I feel like she’s someone who’s comfortable with who she is and how she got there and that feels exciting to me. Especially in that time in what she’s doing, I felt very honored to play her.

AX: Do you see any sort of connection between Dr. DePaul and the Thirties-era district attorney you played in BOARDWALK EMPIRE?

NICHOLSON: Yeah, I did. Being women in those different periods, but in those fields, surrounded by men, but feeling confident enough and strong enough to get themselves there, I did see that they had some similarities.

AX: Does Jean feel to you like a contemporary character, or are those circumstances in THE RED ROAD so different that it still feels like you’re in a different era?

NICHOLSON: No, Jean is present to me. You mean, the world that [is RED ROAD]? It’s timeless to me. It feels like it could be this year, in ten years, ten years ago. But contemporary, present enough.

AX: You played one of Meryl Streep’s daughters in the feature film AUGUST: OSAGE COUNTY. Did you learn anything from working with her?

NICHOLSON: Preparedness. The amount of work that she must do before she even shows up on set was amazing. And generosity. Because she gives that performance a hundred and fifty percent any time the camera’s rolling, whether she’s on camera or not, she brings her full self, and she expects the same from you. And I think that’s huge, because if somebody’s giving you that [when they are] off-camera, then you can be better. And she makes anyone better.

AX: Is there anything else you’d like us to know about THE RED ROAD right now?

NICHOLSON: I think it’s a very interesting show about a community that we’ve not seen before and the exploration of sheriff [in conflict with the] ex-con coming into town, you think you know what’s going to happen and you certainly don’t. It gets crazy by the end. I couldn’t believe it. Every time I read the next episode, it was shocking.