Home » Being Human review Cheater of the Pack 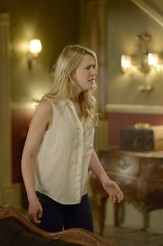 TV Review: BEING HUMAN – Season 4 – “Cheater of the Pack”

Everybody winds up in the doghouse in an eventful episode 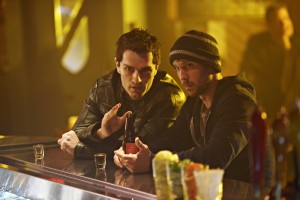 Sam Witwer as Aidan Waite, Sam Huntington as Josh Levison on BEING HUMAN "Cheater of the Pack" | © 2014 Philippe Bosse/Syfy

Poor Josh (Sam Huntington) just can’t win with his wolf. Almost no sooner than he thinks he’s got control of himself – turning at the full moon and so on – than he wakes up next to fellow married werewolf Wendy (Stephanie Lemelin) after Josh and Nora (Kristen Hager) decide to run with the pack.

Josh is desperate not to tell Nora, and even suggests to his mystified wife that they leave Boston. Wendy, however, is certain that she and her husband Mark (James A. Woods) have a marriage built on honesty, despite Josh’s efforts to point out that Mark’s domineering, macho personality doesn’t suggest he’ll take it well. The next thing anyone knows, Mark shows up at the house and begins beating the hell out of Josh. Josh might let Mark beat him to a pulp, except that when Nora tries to intervene, Mark sends her flying. This wakes up Josh’s wolf, and only Nora pulling him off prevents Josh from killing Mark.

Nora is upset by the infidelity – she thinks Josh must have wanted to do it on some level or his wolf wouldn’t have – and by Josh’s lying. Fortunately, Nora isn’t quite ready to walk out.

Meanwhile, everybody gets thrown for a loop when Sally’s (Meaghan Rath) brother Robbie (Jesse Rath, real-life brother to Meaghan) shows up with the news that he wants to sell the house, which actually belongs to their dad. Of course, Robbie has no idea he’s evicting Sally’s ghost – due to events in Season 3, he thinks Sally faked her death and is on the run from the law. Robbie brings by prospective home buyers. One family has a little boy who goes upstairs and encounters something violent (not Sally) in the closet. Sally is furious and does a spell to make the house stink, which drives off anyone who might buy the place, induces Robbie to try to fix the plumbing, and knocks Sally back to 2009, when Robbie was trying to dissuade Sally from staying with violent, toxic and eventually murderous boyfriend Danny (Gianpaolo Venuta). Sally finally sees that Robbie really cares for his sister, even though he showed it badly.

Robbie keeps trying to fix the pipes. A malevolent force in the house causes a pipe leak and a surge that electrocutes Robbie. Sally returns to the present, realizes Robbie can see her – and then they both spot his dead body on the basement floor.

Aidan is uncommonly hungry. He encounters his erstwhile wife Suzanna (Katharine Isabelle), who says she can teach him to exist on very little blood, as she does. The two wind up having wild sex. Aidan says that he wants to learn from Suzanna, but she has to stop killing vampires. It’s terrible when they kill humans, but humans at least get an afterlife – vamps get nothing. Suzanna agrees and restrains herself from killing a vamp in an alley. Aidan, however, winds up overfeeding and killing a young woman. He calls Kenny for help.

So to recap: Josh is in trouble with Nora for both (perhaps) accidentally cheating on her and deliberately trying to cover it up; Sally has once again inadvertently caused a death (creating the smell caused Robbie to be in the basement working with the pipes); Aidan will have hell to pay if/when Suzanna finds out he not only fed, but killed while doing so.

Strangely enough, even though they’re more conscious of their actions, it’s easier to sympathize with Sally and Aidan. Sally is trying to keep the household together and Aidan is at least horrified by the idea of everyone moving out; Josh’s readiness to leave Aidan and Sally in the lurch is appalling, no matter the level of his understandable freakout. Then again, why is he freaking out? Nora seemed to have had sex with the purebreds and it wasn’t an issue – alas, nobody seems to remember this to bring it into the discussion. Although none of the characters are perfect, it’s a little dismaying to see the level Nora become quite so brittle.

There is a fairly funny scene of Josh going to Aidan for advice, and finding out that Suzanna is Aidan’s original, two-hundred-year-old vampire original wife who is now a vampire slayer. Josh absorbs this with commendable lack of judgment; seeing him try to process all the components of this is a great moment for actor Huntington.

Likewise, having the real-life Rath siblings play the Malik siblings works wonderfully; there’s a real resemblance and air of connection. Sally’s newfound compassion for her brother is played affectingly.

“Cheater of the Pack” lays a lot of track for upcoming developments; taken on its own, it’s decent but not great.