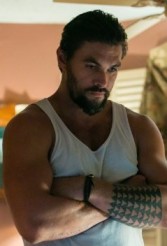 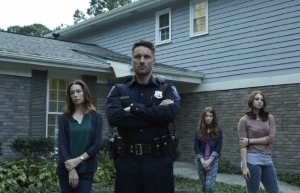 In Sundance Channel’s new six-episode series THE RED ROAD, premiering Thursday Feb. 27 at 9 PM, a contemporary Native American tribe (fictional, albeit based on the Ramapaugh tribe) in the Ramapo Mountains on the New York/New Jersey border dwell in sometimes touchy but generally peaceful coexistence with the mostly white inhabitants of the town down the road. Détente is threatened by two events – Jean Jensen (played by Julianne Nicholson), wife of sheriff’s deputy Harold Jensen (played by Martin Henderson) is involved in an accident, and their former high-school classmate, the dangerous Phillip Kopus (Jason Momoa) returns to the area and offers his assistance. Harold needs Phillip’s help, but it’s unclear what Phillip will want in return.

THE RED ROAD was created by Aaron Guzikowski, a novelist and short story writer who scripted the feature films PRISONERS and CONTRABAND. Guzikowski and his fellow RED ROAD executive producer Bridget Carpenter, who worked as a writer/producer on PARENTHOOD, FRIDAY NIGHT LIGHTS and DEAD LIKE ME sit down in a quiet side room during Sundance’s time at the Television Critics Association press tour to talk about their new venture.

AX: When did you get the idea to do THE RED ROAD?

AARON GUZIKOWSKI: A couple of years ago. Actually, I had known about the Ramapaugh Indian tribe for a little while, but just kind of in passing. I live inNew York City. I started reading some articles and becoming interested in that. I knew I wanted to set some kind of a story in that world and I ended up traveling there and meeting the tribe and whatnot and just started to set all these kinds of stories involving these two families inside of that world. And that’s kind of the impetus of what the whole thing was.

AX: How did the two of you come together on this project?

[GUZIKOWSKI and BRIDGET CARPENTER both laugh.]

BRIDGET CARPENTER: He said, “She looks like a lady who knows how to write.”

GUZIKOWSKI: I’d only worked in feature films before this – I needed to partner with somebody who had experience in television and so I met with Bridget and –

GUZIKOWSKI: She’s amazing. She worked on FRIDAY NIGHT LIGHTS, one of the great shows, a show I quite love, and her work on it was amazing, and we got on really well. It was a good thing.

CARPENTER: Well, I would think that there absolutely could be, but also [there are similarities] in the way that we like to get in the character, which is, what would really happen? These are real people to us. So I would say the way that I worked on FRIDAY NIGHT LIGHTS is the way that Aaron likes to work as well, which is, these are real, complicated, complex, three-dimensional people, and we just want to explore every aspect of their experience. So that’s the similarity for me, because the people in FRIDAY NIGHT LIGHTS were very real to me and the viewers, hopefully.

AX: Jean is a schizophrenic who pretends she has an alcohol problem to disguise her illness from her husband and family …

GUZIKOWSKI: Yes. That was always a main piece of the puzzle to me, something I had a lot of interest in, mental illness, and her particular experience, and that was always a component of the story. Her character is definitely a linchpin in a lot of ways for other things to happen, so just trying to create a situation where you actually see from her perspective sometimes and try to experience that schizophrenic reality and try to depict that cinematically was really exciting.

AX: Now, how is it that her husband Harold believes she’s alcoholic? Wouldn’t he smell that Jean has not been drinking?

CARPENTER: It’s good that you bring this up, because she’s masked it –

GUZIKOWSKI: She’s managed to mask it just by drinking, so she in some ways, she was kind of the “It Girl” in high school, and she came from a very wealthy family and there were certain expectations. And I think when she started to experience this after she had her first daughter. It was adult onset, so it became a little bit later – it comes a little later in women than in men, typically –

CARPENTER: I would say for us, too, part of the back story is a kind of desire not to know, on both her husband’s part and hers.

GUZIKOWSKI: I have to say, on some level, he must know that something is odd, but I think that’s a big part of his character at the beginning of the story – he’s kind of checked out in a lot of ways. And things kind of explode in his face in the first episode and he’s forced to deal with his wife in a way that he really hasn’t before.

AX: Is that dealt with as an irony within the story – that Harold’s job is detecting things and he can’t detect what’s going on with his wife?

GUZIKOWSKI: Absolutely. Right under his nose, his world is corroding, and he’s sleeping in the guest room, watching football and hoping things are just going to work themselves out until life kind of thrusts itself upon him and he has to deal with it.

AX: You have said that the audition scenes left you crying. If this isn’t too big of a spoiler, can you say what those scenes were for the different people? 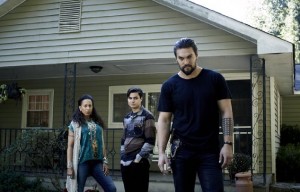 CARPENTER: Well, [Nicholson’s] was just a scene that was in the pilot. It was not an actual sad scene. We were still in the process of writing the scripts when [auditions were held], although the pilot was of course written. I would just say I was crying because of the power of her presence, because as an actor, she does so little and offers so much. It was kind of almost like crying because of her craft. Jason’s audition – he didn’t come in, he sent us a tape, he’d just been in somebody’s house or garage, and we watched it over and over again, and we were like, “Stop the calls [to other actors].” They were like, “Do you want to see this person? We have a list,” and we were like, “We don’t want to see anybody.”

GUZIKOWSKI: It was like, “This is the guy. No one comes close to him.”

CARPENTER: It was so fun. And then Martin, he was inAustralia shooting something, so we had a Skype call with him, and everything really just landed. So different things emerged from the auditions, but the sure knowledge that these are our people.

AX: With Jason Momoa, are you hoping for an influx of rabid GAME OF THRONES fans?

CARPENTER: Sure, we take all kinds [laughs]. Why not?

GUZIKOWSKI: That’s surely not why we cast him.

CARPENTER: It was talent.

GUZIKOWSKI: All of his previous work is of a certain piece. He’s really great at doing the fantasy genre stuff and the sci-fi genre stuff and playing those types of roles, but to see him do this and what he’s capable of beyond that …

CARPENTER: I feel actually compelled to say, Jason was not cast at all for his popularity. He is cast because he is one of the deepest, most soulful and incredible actors that I’ve ever worked with in all my time in theatre and in television. He’s there. And so the other stuff is icing. It’s fun icing, but he’s here because he’s an incredible actor.

AX: You also cast Tom Sizemore as Phillip’s father. Given that Mr. Sizemore has had highly publicized issues with substance abuse, did you have any concerns about casting him?

CARPENTER: He’s very frank, he’s forthright – insurance people bring it up, but not for us creatively, no. Creatively, there was no question.

GUZIKOWSKI: Listen, I think he’s a phenomenal actor. He’s been in some of my favorite films – STRANGE DAYS, SAVING PRIVATE RYAN. He’s amazing and any time he’s on screen, he’s just electric. He came in and auditioned and there was no question. He owned it. Everything else was just noise. He’s a great actor and he was a total pro.

CARPENTER: He was great, and in terms of professionalism, he was a pleasure to work with.

AX: Has there been anything that’s been particularly challenging physically about the production, like mudslides, or …?

GUZIKOWSKI: Well, we shot inAtlanta during the summertime, in the woods a lot of the time –

CARPENTER: There were no built sets, we didn’t have any stages –

GUZIKOWSKI: We were on location, in a lot of houses that were just kind of the way we found them –

CARPENTER: The caves, the woods –

CARPENTER: Animals. A real lake. No creature comforts. And [all of] the actors – they were such troupers. No one said, “I need better air conditioning, a better trailer.” Everybody was just like, we went camping.

GUZIKOWSKI: Yeah, that’s a good way of putting it.

CARPENTER: Yeah, it was. The hours were grueling.

AX: How many episodes is the first season of RED ROAD?

CARPENTER: This is six.

GUZIKOWSKI: WALKING DEAD did six in its first season.

CARPENTER: BREAKING BAD did six its first season, too.

GUZIKOWSKI: Yeah, it’s not that uncommon now, but it’s more like a miniseries in some sense.

CARPENTER: Although we have more to go.

AX: How resolved or unresolved is the story going to be at the end of the six episodes?

CARPENTER: I would say that you’re going to have the feeling of, “Oh, my God, what next?,” rather than, “What happened?” So I think we kind of answer the questions raised in the pilot. The show arcs through and opens up and opens up and it’s very satisfying, and also leaves you saying, “What will happen next?”

AX: Now that you’ve teamed up on this, are the two of you working jointly on any other projects?

GUZIKOWSKI: Well, hopefully we’ll be working on more of this [RED ROAD], because we love working together.

AX: How far could THE RED ROAD go? I mean, until Harold and Jean’s daughters have kids of their own, or …?

GUZIKOWSKI: I have to say, there’s no limit. Like we said, at the end of this season, we ask new questions. There’s always a way to find new ways to look at things and new ways to examine these characters.

CARPENTER: This could go far. We could go seven years, eight years.

AX: Is there anything else we should know about THE RED ROAD right now?

GUZIKOWSKI: Just that it is in many ways a thriller and that is how it is designed. It is a dramatic thriller.

GUZIKOWSKI: It has that very propulsive sort of drive and that’s the experience we’re searching for

CARPENTER: And just to tag onto that, this is really a passion project for all of us. Nobody had fancy digs. Everybody was there because they believe deeply in the art-making of it all, which is really a pleasure.