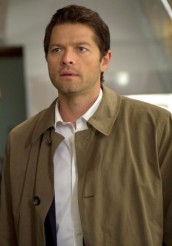 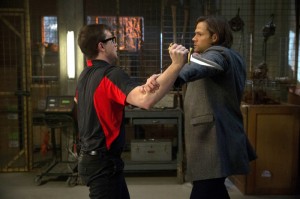 When hugely likable Prophet of the Lord Kevin Tran (Osric Chau) was murdered by the angel Gadriel, who at the time possessed the body of Sam (Jared Palalecki), it was a horrible blow for the audience, as well as for the Winchester brothers.

In the SUPERNATURAL episode “Captives,” we not only get Kevin back – more or less – we get back his formidable mom, Ms. Tran (Lauren Tom), who turns out not to be as dead as previously advertised.

Kevin’s ghost turns up in the Men of Letters headquarters. It seems that Metatron has locked up Heaven so that human souls (as well as angels) cannot enter. This has resulted in a backup in “the veil” that Kevin likens to the worst line ever at the DMV. Kevin has heard from another soul that his mother is still alive, so Dean (Jensen Ackles) and Sam go in search of her. Ms. Tran was being held captive under Crowley’s orders, but Crowley wanted her kept alive, whereas the demon left to guard her is chafing under his absent leader’s orders. Sam frees Ms. Tran and Sam and Dean let her slay the demon.

They bring Ms. Tran back to Men of Letters headquarters. In what is certainly a change of pace for our guys, they don’t seriously attempt to dissuade live mother from bringing her ghost son home with her, although they warn that spirits who linger too long in the mortal realm tend to become problematic. Dean even makes a crack about 24/7 “quality” parent/child time, which sounds like it will drive Kevin crazy sooner than any supernatural issues might, but he and his mom are willing to risk it.

Kevin then asks for Dean and Sam to promise him something. Since they both feel responsible for Kevin’s death, they agree. Kevin then says that just because it’s taken them this long to see him, he could see and hear them. He begs them to stop the drama and the fighting and the self-pity. We are so right there with Kevin. Then Kevin and Ms. Tran leave, and Dean turns to see Sam wordlessly stalk out of the room.

Meanwhile, Castiel (Misha Collins) gets accosted by minions of his one-time angel lieutenant Bartholomew (Adam J. Harrington). Bartholomew has taken over a human ministry, the better to acquire human vessels for his angel army. Like Castiel, Bartholomew wants to oust Metatron from Heaven; unlike Castiel, Bartholomew believes in killing other angels to do it. When Bartholomew tortures and kills an innocent angel, Castiel refuses to join Bartholomew, but when Bartholomew tries to then stab Castiel, Cass defends himself with lethal force. Castiel respects Rebecca, the slain leader of a group of pacifist angels known as the Penitents who were wiped out by Bartholomew. Some of Bartholomew’s former followers now wish to follow Castiel in his quest to bring down Metatron without killing his fellow angels.

There’s such a huge amount of story freight behind Metatron’s takeover of Heaven that some building blocks need to be set in place, though the scenes with Cass and Bartholomew are not especially thrilling. We might worry more for the state of Castiel’s soul, or at least his ethics, if he hadn’t blown it so spectacularly so many times before that it would be hard to believe he could really be fooled again, especially so soon after being royally tricked by Metatron. Still, Collins and Harrington do good work in the scenes.

It’s a great joy to see Chau back as Kevin and even more satisfying to see him with the unstoppable force that is his mother. Tom gives a ferocious performance – and why the heck isn’t she in the opening credits here? It’s not like once Kevin shows up and sends the Winchesters to look for Ms. Tran that they’re not going to find her.

When Kevin talks about how tough it is to sit and watch Sam and Dean snipe at each other, it is evident that SUPERNATURAL’s creative staff have heard voices from beyond (i.e., their viewers) saying much the same thing. The question is, what are they – and the Winchesters – going to do about it? Is Kevin going to have to come back and haunt them into good behavior? Stay tuned.