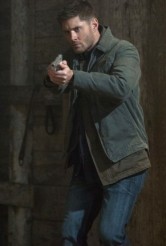 The return of Garth in an episode that’s reasonably suspenseful 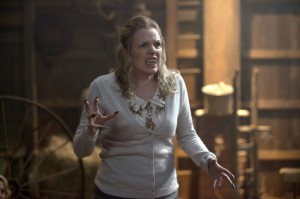 There’s been a lot going on this season of SUPERNATURAL, what with Sam (Jared Padalecki) being possessed by and then exorcised of a homicidal angel, Dean (Jensen Ackles) acquiring the Mark of Cain, Castiel regaining his wings, Crowley fighting to remain King of Hell and poor Kevin being murdered. However, it has occurred to us and the Winchesters to wonder what the heck has happened to erstwhile buddy Garth (DJ Qualls). In the episode “Sharp Teeth,” we learn that Garth has a good excuse for his absence – he’s become a werewolf in love.

Sam and Dean aren’t looking for each other (consciously, at least), but they wind up bumping into each other at a hospital in a small town in Wisconsin, where they’ve separately tracked down Garth. Garth has been hit by a car, apparently while fleeing the scene of killing a cow. Garth wakes up, feigns ignorance of anything that happened, also feigns nausea and ducks out through the bathroom window.

Dean and Sam both can tell something is up with Garth, especially when they find that he’s taken off his hospital clothes and, naked, stolen a car from the hospital parking lot. Sam is irked by Dean’s attempt to persuade him that all is well so he’ll leave. When they track Garth to his house and meet Bess (Sarah Smyth), a lovely young woman who leaps out at the Winchesters as she’s midway into werewolf transformation. Garth manages to keep everyone from killing everyone else. Garth explains that Bess is his wife, she’s naturally upset that two strangers have broken in waving guns, she’s a second-generation werewolf and she saved his life. Garth had been bitten by a werewolf and was preparing to commit suicide when Bess found him by scent.

Beth’s entire family is comprised of werewolves. Her father, the Reverend Jim, is pastor of the local church, which preaches forgiveness and interspecies harmony between lycanthropes (as the werewolves here prefer to be called) and humans.

However, an encounter with an werewolf sheriff’s deputy quickly convinces Sam and Dean that not all of the locals have peaceful intentions. Dean learns that some werewolves worship the Norse wolf deity Fenris and are planning for their version of Ragnarok, the Norse version of Armageddon, which to them means werewolves destroying humans and ruling the world.

It turns out that Reverend Jim’s wife Joy (Eve Gordon), Bess’ stepmother, is a Fenris worshipper, unbeknownst to her husband. Joy has two of her werewolf supporters kidnap Bess, Sam and Garth. She plans to make it look like Sam has killed Bess and Garth, which Joy imagines will lead the pacifist Jim to finally embrace Fenris and seek revenge. She of course reckons without the resourcefulness of the Winchesters and even Garth. Joy and her violent packmates are killed, Bess and Garth are saved, Reverend Jim is stunned and Sam and Dean are content to leave Garth and his new family in peace – there are even some goodbye hugs.

Garth offers to resume hunting with Dean and Sam – he feels awful that he wasn’t there to help Kevin, though Dean is still assuming full responsibility for that death. Dean thinks Garth is best off where he is, being happy with Bess.

Dean is now ready to work with Sam again, but Sam says he can’t trust Dean like before. Sam observes that Dean keeps talking about “family” as though that makes everything better, but to Sam, it makes it worse. He is willing to work with Dean, but he’s not willing to do it if Dean constantly makes it about them being brothers. Dean accepts this, so the two Winchesters ride off together at the episode’s end.

If nothing else, this evidently spares Sam from driving off in a blue car with a truly hideous spoiler on its hood. It doesn’t spare us from yet more fraternal tension, which I guess is to SUPERNATURAL what the smell of oil is to an old car – annoying, but it lets you know the engine is running. We can sort of grasp in big-picture terms what Sam wants from Dean – essentially, for Dean to stop putting Sam ahead of saving the world. So end of Season 5, dude. In practical terms, what the hell is Sam talking about? How is Dean not treating Sam like his brother going to accomplish anything, except long silences on drive time? How is … oh, never mind, it’s the show’s engine doing its thing.

This aside, given the fact that beloved recurring characters often die on the show, and that it’s hard not to love Quall’s delightfully played, goofy, bighearted Garth, there’s genuine suspense. Is Dean going to jump the gun? Has Garth’s lycanthropy turned him to the dark side? Is Garth’s secretly raving mother-in-law going to do him in? We truly worry and we’re truly relieved when Garth gets to live happily and on good terms with the Winchesters, at least for now.

The episode also has some nifty little puzzle pieces, like the silver bullets the members of the werewolf church wear around their necks. The initial explanation is that it keeps them humble, reminding them that they are neither immortal nor indestructible. When Dean finds a bullet that says Ragnarok on one of the werewolves who attacks him, this leads him to his path of discovery about the Fenris cult. When Dean confronts Reverend Jim, the fact that the werewolf’s bullet doesn’t have Ragnarok (or any other word, for that matter) on it proves that the minister is telling the truth about himself and the majority of his congregation.