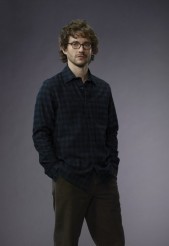 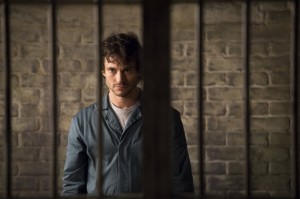 Poor Will Graham. When last we saw the FBI profiler played by Hugh Dancy, he’d been framed for multiple murders and cannibalism by his psychiatrist, Dr. Hannibal Lecter (Mads Mikkelsen), who Will has recently realized is the real killer.

When NBC’s HANNIBAL, adapted from Thomas Harris’ novel RED DRAGON by show creator Bryan Fuller, comes back for its second season on Friday, Feb.28 at 10 PM, Will is fighting to prove his innocence. Will is also coping with his own actual mental issues, as well as recovering from encephalitis, which Hannibal allowed to go untreated.

The character of Will may be deeply troubled, but actor Dancy sounds very happy to be playing him. Dancy, a British veteran of stage, film (BLACK HAWN DOWN, HYSTERIA) and TV (DANIEL DERONDA, THE BIG C), is present at an event NBC holds for the Television Critics Association, where he talks about the ups and downs of cracking Dr. Graham.

AX: When you got this role, were you expecting it to be even more difficult than it looks?

HUGH DANCY: No. In all honesty, I didn’t have a full sense of where it was going to take me. What drew me in was the first script, which I read, of course, and then talking to Bryan and realizing his ambition and also just his personality – I wanted to work with him. Then I went back and read RED DRAGON for the first time and thought, “Oh, hell, what have I got myself into?” and then [Fuller] really described in more depth what was going to happen to Will. But I want to work and I want to be challenged, and I want to be pushed into difficult places. That’s the fun of the job. So I was very happy for that.

For me, the experience is working with great actors that I’ve admired for years and years, and with great writing, so the predominant feeling when I go home is, “God, this is so great. I hope I get to do this again tomorrow.” Obviously, you’ve got to try to root it in reality, as Bryan was saying. I want people to believe that the [unhappy] emotions that Will is experiencing are for real, but I really enjoy the job. This has been one of the best work experiences I’ve had.

AX: Without being too spoilery, can you say what’s going on with Will at the beginning of Season 2?

DANCY: Well, I think we have to play out where we left off at the end of the first season, meaning that at the beginning of this season, Will is still in the position of trying to convince people of what’s happened. He’s still putting up his hand and saying, “Hey, this wasn’t me –Hannibal did it.” Ultimately, the set-up, that Hannibal’s framed him so successfully, he realizes, “Okay, that’s a dead end. I’ve got to find a different route.” And that’s what happens. He tries various maneuvers. Will is a very smart guy and one of the interesting things, I think, is seeing him embrace a side of himself that can be manipulative.

DANCY: Well, it was a slow, steady buildup, just starting from a place of basic depression. I felt last season that that spiral, that progression over the course of the thirteen episodes, was so well-charted-out, and Bryan had described it to me. He basically said when we started, “At the end of the season, you are going to vomit up an ear.” And I thought, okay, that’s all I need to know. That gives me the trajectory that I need. And then in the relationship with Hannibal and working with Mads and going further down that rabbit hole, it all actually fell into place in a very straightforward way. And dark as it may be, it was incredibly fun and rewarding. In fact, the worse it got for him, the more I enjoyed it, which may be to do with me. I don’t know. But this season, it’s even worse. So I’ve been very happy.

AX: Is it more difficult to do a TV series, where the character evolves through scripts that haven’t been written when you sign on, vs. a play or a film, where you get the whole script at the outset?

DANCY: Well, I mean, I have a pretty good sense, I think, of the basis, the kind of underpinnings of who Will is, and one of the facts about him is that he’s incredibly elastic, he can go off in any direction, so I don’t exactly get surprised. Plus, of course, by virtue of being a prequel of sorts, we kind of know where we’re headed. There’s only so far we can veer off track.

AX: What is the tone like on set? Is there any levity?

DANCY: Yeah. There are a lot of jokes. Look, we’re making a show about really well-dressed cannibals, so the comedy comes pretty easily. I mean, put it this way – [laughs], you know that amazing mural [in Season 1 made from a bunch of corpses]? Well, the reality of that is, you’ve got thirty-five or forty naked, sweaty, farty people lying on a floor. So we’d be doing those scenes, and then you’d hear – I’m not exaggerating this – a stomach rumble here and at least four of them were asleep. So it’s takes some of the edge off the horror.

AX: Do you have a take on what Will’s visions of the stag mean to him?

DANCY: My feeling was that Hannibal, from the very get-go, that [first] crime, he inserts himself right into Will’s dream world. He just knows enough or senses enough about Will that he implants himself in Will’s unconscious, and that’s why as the imagery of the stag develops and ultimately becomes Hannibal, that’s Will’s process of figuring out what’s being done to him.

AX: Can you talk at all about working with the animals, because Will has quite a collection of dogs? And are you actually ever in frame with the stag that will sees in his visions?

DANCY: Well, the stag is CGI, obviously. So we don’t have a stag that gets led on set and then –

AX: Craps all over.

DANCY: Yes, exactly. It’s enough, trust me, with the dogs. It’s kind of great – I love that side of Will. I think that he’s such an unsympathetic character, superficially at least, because he keeps everybody at arm’s length, that seeing him in his home with his dogs instantly lets you understand who he is for real. It’s basically what makes him likable. I always though that the twin poles of the character were seeing him in his head kill other people – understanding that that’s where he goes – but then to balance that out, seeing him go home and go back to this lovely little place of security and pet his dogs.

AX: How is it actually working with the dogs? Do they respond to you at all, or just the trainers?

DANCY: [laughs] There are good days and bad days, put it that way.