A strong continued juggling of vampire, werewolf and ghost themes 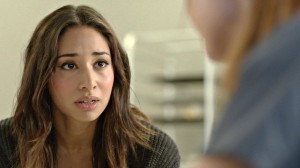 BEING HUMAN’s fourth season continues its streak of solid episodes with “Panic Womb,” with Aidan (Sam Witwer) and Sally (Meaghan Rath) continuing to address problems introduced earlier in the season, while Josh (Sam Huntington) and Nora (Kristen Hager) confront a whole new one – a werewolf couple who are expecting a baby.

Meanwhile, Aidan has his hands full with “son” Kenny (Connor Price) The assassin killingBoston’s vampires – this is actually Aidan’s wife Suzanna (Katharine Isabelle), now a vampire herself, though Kenny has no idea Aidan knows her – has struck again. Kenny is convinced she’s after Aidan, because he’s a high-profile vampire. Aidan tells Kenny he’ll look into it, and then brings Kenny downstairs to let the others know the young vamp is still alive. As the last time they all saw each other, Kenny was out of control and attacked Nora, Josh is beside himself with fury. However, Nora is ready to accept Kenny’s apology. She’s been out of control herself enough times to empathize, and Aidan is irritated with Josh’s judgmental attitude, seeing that he left his cage door open so that he could have killed Aidan and Nora in Josh’s effort to get Aidan to kill him. Josh goes to jog it off.

On his jog, Josh smells another werewolf – and sees she’s pregnant. Caroline (Mylene Dinh-Robic), once she gets over the shock of being approached by a strange wolf, explains that she and her husband Andrew (Tim Rozon) tried for five years to conceive. Then they were bitten. Caroline was suicidal – and then became pregnant. Josh has been fired from the hospital, but suggests that Nora sneak Caroline and Andrew in for an ultrasound.

Andrew turns out to be moderately hostile, especially when he sees Josh’s eyes change. When the ultrasound equipment starts to cause Caroline to squirm and the image suggests the baby may have claws, Andrew and Caroline run.

However, when Caroline goes into early labor, the couple turns up at the door of the house – they don’t know where else to go. Nora takes charge, puts Caroline in the bedroom. Andrew shares his fears – he knows of two other women bitten during that camping trip who both died in childbirth. Josh assures Andrew that this is different because Andrew and Caroline are both wolves (unlike the other women, whose husbands were human) – their baby will be a purebred. Of course, Josh knows he’s just blowing smoke. The baby comes out looking like a werewolf in mid-transformation – not a lot of hair, but there’s a muzzle and a canine spine. Her parents immediately pronounce her beautiful and perfect. This leaves Josh and Nora with something to think about.

Sally continues her obsession with “Lil Smokie” (Helen Colliander), as she’s dubbed the teen she saw in her flashback to Seventies, when a human sacrifice appeared to be taking place in the house. She prevails on her ghost-seeing acquaintance Zoe (Susanna Fournier) to look up the house’s history on the Internet. In the Seventies, it belonged to the Benson family. They had a teenaged daughter, Beatrice, but there’s nothing about a murder. When Zoe and Sally track the Benson family down to the current address, the elder Bensons have passed away, but Beatrice (Mary Katherine Harvey) is still very much alive, with a teenaged daughter who could be a twin of Beatrice at that age. Zoe poses as a representative of a historical society, but Beatrice doesn’t seem to have much to tell. However, when Zoe and Sally leave, Beatrice takes out a photo that shows her with her parents – and “Lil’ Smokie” peering out at them from an upstairs window.

Zoe tells Sally that she came along not to help, but to protect other people from Sally. Sally makes everything worse. Sally understandably gets blue over this, so Aidan gives her a pep talk.

Aidan goes to confront Suzanna, who demands that Aidan pick a side. She refuses to stop killing her fellow vampires, even those who don’t kill humans and are drinking from blood bags. She’s still taking vengeance for what happened centuries ago (although Aidan doesn’t know she killed their son in her initial fit of bloodlust). Aidan lets Kenny et al know Suzanna’s location and gives her five minutes to leave town. Suzanna is enraged by what she sees as betrayal and tells Aidan his relationship with the human Kat (Deanna Russo) isn’t real and will never work.

Since Aidan loves Kat and wants a “real life” with her for however long it can last, he goes to her. Kat knows he’s been keeping something from her, and he tells her the truth – he’s a vampire. Kat bursts out laughing in his face.

Although the vampire sections feel a little familiar – not necessarily from this series, but because there are now so many shows dealing with which vampires are controlling what areas and how other vampires feel about it – Witwer’s work as Aidan makes his dilemmas relatable. After all the high drama surrounding vampirism, Kat’s laughter (and kudos to Russo) is also welcome.

There werewolf story is unexpectedly sweet. It’s good to see Josh and Nora have an interested but contained (as opposed to freaked-out) reaction to new possibilities within the world of lycanthropy, and the baby werewolf is adorable in a creature-feature way. Guest stars Dinh-Robic and Rozon play their unconventional spin on the difficult pregnancy TV convention with utter commitment.

The “Lil’ Smokie” plot thread is intriguing, though one can venture a guess as to what may be going on here. We really do hurt for Sally when Zoe tells her off; and the scene where Aidan first teases his ghost friend, then realizes he needs to step up and reassure her feels appropriate and satisfying.

We understand why the characters are acting as they do in “Panic Womb,” but there’s no cause for audience alarm – BEING HUMAN continues its current pattern of smooth delivery.