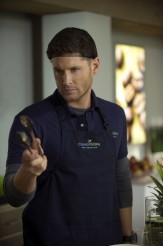 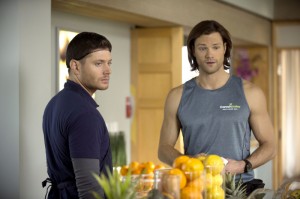 SUPERNATURAL likes to reference movies in its episode titles, but the moderately gross opening sequence of “The Purge” makes us worry for a little while that the whole thing is going to involve victims vomiting before they perish.

Turns out this is just the writers playing into the pun and there’s no more reverse peristalsis in “The Purge,” though the episode does involve people trying to lose weight. Dean (Jensen Ackles) finds a weird death in Minnesota, which eventually leads him and Sam (Jared Padalecki) to go undercover at a New Age health retreat, where clients lose absurd amounts of weight in a week but come out with some strange-looking scars.

Sam poses as a personal trainer, while Dean gets stuck on the kitchen staff. It turns out that spa owner Mauritza (Annabelle Acosta) is a Peruvian fat sucker, but she and her human husband Larry (Corey Sevier) aren’t hurting anyone. Mauritza simply removes fat from the clients while they’re having what they think is another sort of treatment; the scars are left by Mauritza’s fat-sucking tongue.

Unfortunately, Mauritza’s brother Alonso (Joseph Julian Soria) has a problem with “portion control,” as the Winchesters put it, and has been draining some people to the point where they collapse and die. When Larry tries to send Alonso packing for dragging Hunters into the picture, Alonso kills him. Mauritza, stricken by her husband’s death, tells Sam and Dean how to kill Alonso. Sam and Dean then argue over whether to kill Mauritza; Sam points out that she hasn’t killed anyone and that Dean wouldn’t have been okay with someone killing Sam while he was possessed by Gadriel. In the end, Mauritza is sent back toPeru.

Back at the Men of Letters headquarters, Dean admits he was upset by Sam’s words about not wanting Dean to act like they’re brothers. Sam says Dean uses family to justify his actions, and that Dean saving Sam wasn’t for Sam, but rather about Dean not wanting to be left alone. Dean says if the situations were reversed, Sam would do the same, and Sam says, no, he wouldn’t. And then Sam exits the room, leaving Dean alone.

“The Purge” has some fun with some FARGO-esque dialogue and characters in the rural Minnesota setting, complete with female sheriff (Brianna Buckmaster) patterned after Frances McDormand’s folksy lawwoman.

The health retreat enjoys playing with Dean’s aversion to food containing actual nutrients and positively has a blast showing off Padalecki in a trainer’s outfit. Dean seems way too hard on Mauritza – far from a menace, she’s providing a public service. (There’s an argument to be made that if she explained exactly what she was and how she does what she does, she’d get more clients rather than less – people would know for a fact their fat would be gone.) At least Sam is able to bring him around.

As for the Dean/Sam situation, Sam has gone from being sulky to trying in his own mind to be proactive (though it’s not clear exactly what he expects Dean to do at this point) to being outright mean. We know he didn’t try to get Dean out of Purgatory, but Sam’s explanation for his inaction was brotherly, not impartial. Granted, Dean is goading him, but still, Sam saying he’d let Dean die in this context seems more punishing than informative. The season seems to be gearing up for another confrontation/catharsis, but having it happen this frequently between brothers is only marginally less annoying than seeing it (as on other series) between lovers or friends. We’ve all heard of repetitive family dynamics, but can’t these guys learn anything from past experiences? Doubtless the Mark of Cain will play some role in what’s going on here, but in the meantime, we the viewers are stuck with déjà vu and siblings in the midst of yet another fraternal hissy fit.

We’re here to watch these wayward sons carry on, but it might be good if “carry on” didn’t translate so often to “complain and criticize.”