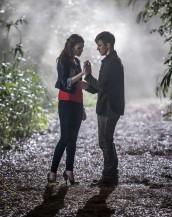 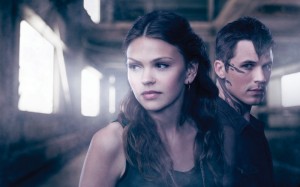 In STAR-CROSSED, on the CW Mondays at 8 PM, it’s been ten years since the Atrians, an alien race, landed on Earth. They were at first quarantined, but now humans are tentatively allowing them to integrate on a limited basis. Nine Atrian teens are attending a human high school. Atrian youth Roman (Matt Lanter) and human adolescent Emery (Aimee Teagarden), who originally met under dramatic circumstances as children, find themselves drawn together, despite a lot of pressure from both peers and their elders.

STAR-CROSSED series creator Meredith Averill (whose previous writer and/or producer credits include THE GOOD WIFE, LIFE ON MARS, HAPPY TOWN and SAMURAI GIRL) and her co-show runner Adele Lim (also of LIFE ON MARS, as well as PRIVATE PRACTICE, LIFE UNEXPECTED and ONE TREE HILL) are in attendance at a party at CBS Radford Studios that CBS, The CW and Showtime are holding for their producers and the Television Critics Association. The two producers talk about their new series full of alien romance and social commentary.

AX: Are you both of you show runners on STAR-CROSSED?

MEREDITH AVERILL: I developed the show, and then we co-run it together.

AX: Were you inspired at all by ALIEN NATION when you started out? STAR-CROSSED seems to have some of that show’s use of an alien race for social and political allegory.

AVERILL: I was actually unaware of ALIEN NATION when we started to develop it, but have since of course seen pictures from it and I do see the sort of similarity, but no, I wasn’t inspired by that at all. Actually, the concept came from a trailer that a Spanish production company created, but [they] never made the show. The trailer depicted an alien race being integrated into a high school. So that’s actually where the concept came from.

AX: And since most teenagers feel like they’re a member of an alien race being sent to a strange planet when they first go to high school …

AVERILL: Yes. I think the one thing we can all sort of relate to is, we’ve all felt like the Other at some point, in high school for sure.

AX: Can you talk about the evolution of the concepts and the culture and the layering in the STAR-CROSSED story universe?

AVERILL: Well, in the pilot, you’re just introduced to the Atrians and the Market and the Sector, and then in the series, certainly by Episode Two, you really get to delve into a lot more of the culture of the Atrians and you learn that there are four different tribes inside their race, you learn a lot more about what makes them unique and what makes them special and their powers that they have. It was fun for us and our writing staff to develop all of that stuff, to come up with those cool details, because we think that they are like no other alien race that has ever been on television before.

ADELE LIM: It was good to have all the writers in, and we had some help from [staff] writers who had worked on a lot of science fiction to let us know if we were stepping on any alien precedents that had been set before. It was a lot of fun, and by Episode Three, you’ll be seeing what they do with their plants [the Atrians are have raised herbalism to a near-magical art] and their other abilities and powers.

AX: How much of an ensemble is it? How much are we with the two romantically-involved characters and how much with their family and the political drama with the aliens and the drama with Emery’s father, the town sheriff?

AVERILL: I think in the pilot we are very focused on Roman and Emery, but in the series, the show opens up a lot more, and you get to know a lot more about the supporting cast, particularly Malese Jow who plays Julia, Natalie Hall who plays Taylor, Greg Finley who plays Drake, Chelsea Gilligan who plays Teri – you really get to learn a lot more about them and their relationships with each other. We don’t go too much into their family lives, like Emery’s family, so you’re not going to see so much with the father after the pilot, but Gloria, played by Victoria Platt – she’s excellent – who’s our government official, we’re going to see her a lot, because what the government is doing with the Atrians is always affecting our story and changing it, so Gloria has a very big part in the show. She’s probably the most important adult on our show.

AX: Although there are slight differences, the Atrians are fairly human-looking. Was that your intent, or did you originally want them to look a little more extreme?

AVERILL: We love the way that they look. What we wanted was for them to have a relatable look. That’s why we chose to have them look human. I think that keeping them looking a lot like us helps with the allegory of racism and why are we so afraid of someone who looks a lot like us just because they come from a different place and maybe have a very small different characteristic? That’s why we chose to have it look a little bit more human.

AX: Was the romance always going to be at the heart of STAR-CROSSED? 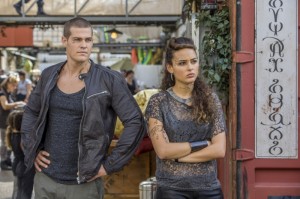 AVERILL: Yes. It was always planned on being a ROMEO AND JULIET story, so certainly the romance is the center of the show.

AX: This is your first gig as show runners. How is show-running?

AVERILL: It is a blast [laughs].

LIM: Everybody tells you it’s going to be so much more work and intense, and it is, but it’s so exciting, having a whole world, that you don’t think about it. There just aren’t enough hours in the day.

AVERILL: I don’t know how anyone does it alone. I’m very lucky to have a partner, if only someone to commiserate with over a glass of red wine at eight o’clock when you’re still at the office.

AVERILL: This is all I have time for and that my heart has time for right now. No, I’m a hundred percent STAR-CROSSED right now.

AX: Is there anything else you’d like to say about STAR-CROSSED right now?

AVERILL: Just that STAR-CROSSED is an epic sci-fi bad-ass romance and I hope anybody who’s looking for that will come and watch.