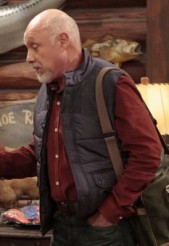 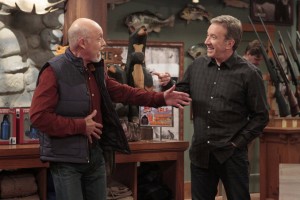 Veteran actor Hector Elizondo has made his mark over the years on stage, in films and on television. He’s currently in his third year on ABC’s half-hour comedy LAST MAN STANDING, Fridays at 8 PM. In the series created by Jack Burditt, Elizondo plays Ed Alzate, who’s friends with lead Tim Allen’s Mike Baxter, an alpha male who is having trouble coming to terms with the lives of his wife and daughters.

In addition to being part of virtually everything made by director Garry Marshall, native New Yorker Elizondo was in the original feature THE TAKING OF PELHAM ONE TWO THREE, a regular in the TV version of POPI and CHICAGO HOPE, to list a few of his screen credits. Before becoming a full-time actor, Elizondo has also been at various times in his life a classical guitarist, a weightlifting coach and a ballet dancer, among other professions.

We catch up with Elizondo at a party thrown by ABC for the Television Critics Association, where he talks about LAST MAN STANDING, his ongoing love of theatre – and why he doesn’t do live stage much any more.

AX: What made you decide you wanted to do a TV series again at this point in your career?

HECTOR ELIZONDO: The idea was good and I liked the credentials. It was a good pedigree. Tim Allen is a known commodity on television; I know he’s a good pro, I checked that out, [pilot helmer] John Pasquin is a terrific director, and I love the studio. I love working with [Disney].

AX: Had you played a character like Ed Alzate before?

AX: So what was appealing at the start was mainly that it seemed like a good work environment?

ELIZONDO: Very good. And also, working with Tim is a pleasure. He has great timing. He’s a real pro. I’m very comfortable there.

AX: As LAST MAN STANDING progresses, is Ed a little different, or is he pretty much the same fellow he was at the beginning?

ELIZONDO: Life goes on, and it’s all about change. Now there’ll be a lot of frontal nudity [laughs]. I’m joking. Of course, there will be differences. One of the advantages of doing a long-running series, at least starting [the third] year, we’ll assume it’s gotten off on the right footing, is that you get to know a character, you get to explore, especially what leads to comedy. What leads to comedy is drama and tragedy. That’s what makes it funny. So of course, Ed is going to be a fellow who will be challenged in one way or another. And you’re going to find out that he and Mike, old buddies for thirty-plus years, are not the same kind of person. Their differences are complimentary.

AX: Has working with Tim Allen turned out to be what you expected it to be?

ELIZONDO: Yes, and more. I’ve found that he’s a real actor, and that was a pleasure to discover. He likes to be challenged that way. And that was a nice discovery. I knew he was funny, I knew he was a hard worker, I knew he had chops, he has great timing, of course. He has wonderful timing. But he has an actor’s instrument.

AX: We’ve seen the two of you make each other laugh off-camera at these press events. Do you try deliberately to crack him up, or does that just happen?

ELIZONDO: He’s so quick, and I’m the one with the straight face that tries stuff. And for some reason, I tickle him and he tickles me, so to speak.

AX: How was it getting back into the rhythm of doing a half-hour show, because before LAST MAN STANDING, you hadn’t done one regularly for a while?

ELIZONDO: Like riding a bicycle [laughs], once you’ve done theatre as much as I have. This is very comfortable for me, because it’s more like a play. And since I come from the theatre, I’ve done so much theatre, this is old home week.

AX: You won an Obie Award when you originated the portrayal of God in the original off-Broadway production of STEAMBATH, right?

ELIZONDO: Yes, I did. That was midway through my theatre life. I started theatre in 1960. I worked in theatre inNew York all throughout the Sixties, the Seventies and part of the Eighties. That’s why I became an actor, to become a theatre actor.

AX: Do you go back to the stage during hiatus?

ELIZONDO: No, because I don’t like to just practice the craft, I like to be an intermediary between author and audience. I like to do a piece that calls me and that makes me want to do it. Arthur Miller was my playwright, for example. I’ll do any Arthur Miller play that I am asked to be in. I like to be the conduit for a playwright.

Doing eight shows a week at my age, you’d better be passionate about it.

AX: If Garry Marshall is making a movie – as you’re in all of his movies – do you get a couple days off from LAST MAN STANDING to go work with him?

ELIZONDO: Of course. I did another one for him [during LAST MAN STANDING’s first season], NEW YEAR’S EVE. I did a little movie [GO FOR SISTERS] with John Sayles, wonderful director and writer. Everybody does cameos for John Sayles. He’s an extraordinary individual. And of course another movie with Garry Marshall, my friend. I just commit crimes of passion these days. I do what I want, when I want. Mostly I have a foundation for children. And that’s one of the reasons I got back on the horse, to fund the foundation.

AX: What is it called?

ELIZONDO: It’s the Elizondo-Campbell Family Foundation. It’s a charitable trust. I write a lot of checks for causes that are important, such as Planned Parenthood, and I like to help fill in the gap for what’s not being paid attention to.

AX: What do you think we should be paying attention to more right now?

ELIZONDO: I hear my wife’s voice – I should be sitting down and writing. I should be doing my best to [be more politically active].

AX: Anything else you’d like to say about LAST MAN STANDING?

ELIZONDO: I think that’s a topical show because it addresses where the alpha male belongs today. And that’s a great opportunity for parody and comedy, and how to raise a family under those circumstances. It’s a confusing time. I hope that it touches upon some of the issues. There’s an opportunity for Ed to represent, humorously of course, a generation – I play the older generation on the show, of course – that is concerned. What happened to the New Deal? I say no more.