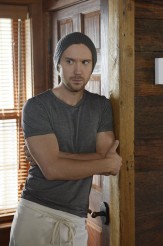 A good episode, even if it does have an impenetrable time paradox 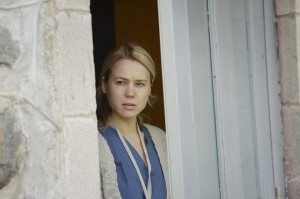 Happily, BEING HUMAN doesn’t decide to permanently warp the timeline. Given that we’ve spent three-and-a-half seasons investing in the one already provided, dumping it now would be a cheat of huge proportions. In “Too Far, Fast Forward!” things get set right – though it’s not clear exactly how – and we’re back with the problems we had two episodes back, sans Sally’s (Meaghan Rath) dangerous desire to resurrect her brother Robbie (Jesse Rath).

In the immediate aftermath of Sally’s death in the alternate past, Aidan (Sam Witwer) calls vampire mentor Bishop (Mark Pellegrino) for help with the body. Then Aidan and Bishop track down werewolves Josh (Sam Huntington) and Ray (Andreas Apergis). Ray struck the fatal blow to Sally’s head and isn’t in the least conciliatory. Over ghost-Sally’s objections, Aidan kills Ray. Sally proclaims Aidan a monster.

A year later, Aidan is Bishop’s loyal employee, getting him clean blood from the hospital (the vampire plague from human flu victims has broken out). Josh is working at a pie shop and Sally keeps haranguing him, much to his annoyance. Aidan also has a wary work relationship with Nora (Kristen Hager); he won’t tell on her painkiller addiction if she doesn’t tell on his blood theft.

When Aidan comes up short, Bishop beats the crap out of him – but then actually defangs a different underling who has been skimming money. Sally possesses Josh in an attempt to find witch Donna (Amy Aquino). This doesn’t work, but Josh now has memories of a future where he and Nora are married. He is at last willing to give Sally some credence. Sally finally goes to see Aidan and they make up; she tells him how werewolf blood can make him immune to the blood plague.

Aidan tricks Bishop into drinking tainted blood; Bishop is understandably angry, but proud of Aidan, his “son,” for surpassing him. Aidan is now vampire king ofBoston, but he’s not so sure he wants it. Sally still wants to get everybody back on their old path, but doesn’t know how to find Donna.

That’s okay, because Donna finds Sally, having felt a strange pull on her energy. In short order, Donna becomes convinced that the link between them is real (she tries to cut Sally, a cut instead appears on Donna’s shoulder) and that Sally can bring her peace. Donna warns that Sally may jump around a little in time, perhaps bouncing into the future, before settling where she’s supposed to be. Aidan tells Sally that if he doesn’t remember he loves her that she should make him remember.

Sally bounces into a future where a tearful Aidan is yelling at Josh for ruining something – and Aidan then tears Josh’s throat out. Sally is horrified and sees a body being carried into an ambulance. Aidan and Josh are standing on the steps of the brownstone. The body is Sally’s brother Robbie (Jesse Rath). Aidan and Josh apologize – Sally vanished one night ago (from their perspective) and they didn’t know what to do. Sally realizes she’s home, but the scene she just saw felt as though it will happen soon (though at the episode’s end, she still hasn’t told Aidan and Josh about either the past or the future).

There are a few questions here, starting with how getting Sally back to the present after her past actions causes the other timeline to go away altogether. It’s rare for a time paradox to make total sense, though, so in this respect, BEING HUMAN fares no worse than many other shows that have juggled this premise (and with four episodes left, perhaps more explanation is forthcoming).

Sally’s behavior past and present is consistent with her character, and she is blessedly at least not sulking – whatever happens, she tries to be proactive. This may wreak havoc, but it produces consistently better results for the viewers than, say, Josh deciding he can’t deal with his friends. This said, Josh actually handles things commendably well here, and Aidan behaves in good conscience.

Whenever all the characters come together to do something, whether it works or not, BEING HUMAN finds its heart and often its wit. This is the case with “Too Far, Fast Forward!”