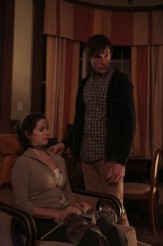 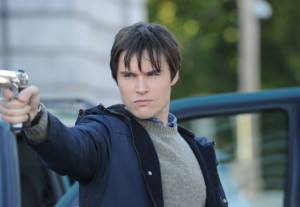 Sam Underwood as Mark in THE FOLLOWING | © 2014 Sarah Shatz/FOX

Sam Underwood seems like decent, level-headed fellow in person. However, the English actor has played a number of highly disturbed Americans. There was Dexter’s would-be apprentice Zach in the final season of DEXTER and Dana Brody’s unstable boyfriend Leo on Season 3 of HOMELAND. Now, in Season 2 of THE FOLLOWING on Fox, Mondays at 9 PM, Underwood portrays twin serial killers Luke and Mark, whose mother Lily (Connie Nielsen) is even more warped than they are.

At an event held by Fox for the Television Critics Association, Underwood talks about playing dangerous men.

AX: Did you audition for THE FOLLOWING or was this offered to you?

SAM UNDERWOOD: No, I auditioned. I did the whole gambit, from basic audition to screen test.

AX: Had you watched Season 1?

UNDERWOOD: Yeah, I’m a big fan of Season 1; I definitely watched them all again.

AX: Had you wanted to play someone this disturbed prior to getting this role, or rather, roles? The characters in DEXTER and HOMELAND are somewhat disturbed, but Mark and Luke go well beyond that.

UNDERWOOD: I really love to play interesting, complex and challenging characters, not always necessarily disturbed, but complex and interesting is what I go for in the work.

UNDERWOOD: It’s about the character and the material. As long as it’s interesting material, that’s what I go for, not so much the genre.

UNDERWOOD: I think Zach doesn’t know who he is when you first meet him. He has a sense that he’s a teenager who thinks he knows who he is, and he projects an idea of what he wants people around him to be, how he wants to affect people. It’s not until he meets Dexter that he almost becomes real, human nearly, toward the end, and he almost touches on who he possibly could be. Luke, from the get-go, knows exactly who he is, and there’s a narcissism with Luke. There’s a real sense of power. Zach never felt like he had power in DEXTER, especially when he met Dexter. He was totally out of his depth and felt like he needed a big brother or dad to kind of lead him around. Luke doesn’t need any kind of permission, and that’s a lot of fun to play, and it’s a lot of responsibility to play and to humanize that as well.

AX: You use an American accent in the show, rather than your regular speaking voice. Did they feel that between you and James Purefoy, who does use his real accent as Joe Carroll, that two British accents on THE FOLLOWING would be overkill?

UNDERWOOD: Maybe. We get around everywhere.

AX: Did you have learn how to do anything for this, like how to hold a knife or how to kick somebody?

UNDERWOOD: Not particularly. I had to explore a couple of different things that I hadn’t done before, but not learning anything brand-new.

UNDERWOOD: To America? About eight years ago.

AX: Have you mostly been playing Americans?

UNDERWOOD: Americans and English and other [nationalities]. I’ve played people from other countries as well.

AX: THE FOLLOWING shoots in New York. How do you like working there?

UNDERWOOD: It’s wonderful to shoot in the town I’ve been living in for the past eight years.

AX: When you have questions about your character, who is the main person you consult with? Is it series creator Kevin Williamson?

UNDERWOOD: Yeah, Kevin Williamson is the person I deal with mostly, yeah. And Marcos Siega, who directs and produces on the show.

AX: How do you like a director to work with you? Do you like directors who are very specific, or someone who is looser in approach?

UNDERWOOD: Someone who’s communicative. Every director has their own different approach, so as long as there’s an open communication, I enjoy getting to work with different directors, and I’ve had the opportunity to work with some very, very good ones on the show.

AX: Is there anything else you’d like to say about THE FOLLOWING right now?

UNDERWOOD: I think the show is really interesting, because we don’t just look into serial killers and FBI agents; it really looks into society as a whole and the need for leadership or to be a leader.  I think it’s a really interesting [issue] in society nowadays.