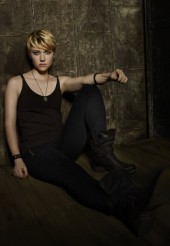 Exclusive Interview: Valorie Curry on THE FOLLOWING on Season 2 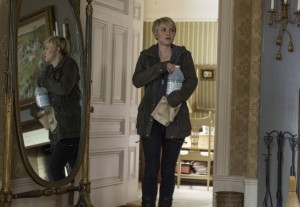 THE FOLLOWING, now in its second season on Fox, Mondays at 9 PM, concerns the hunt by Kevin Bacon’s character, former FBI profiler Ryan Hardy, for serial killer Joe Carroll, played by James Purefoy. Joe isn’t just any old serial killer – he has a large and surprising following of sympathizers and fellow killers. Among their number, arguably the most ardent is Valorie Curry’s Emma Hill. Emma, as we’ve seen, is a mistress of disguise and misdirection, able to seem entirely innocent and normal while being entirely lethal.

When Curry auditioned for Emma, THE FOLLOWING’s creator/executive producer Kevin Williamson says admiringly that she seemed to him like the Angel of Death.

Curry, who hails from Orange County, California, got her TV start in an arc on VERONICA MARS. On the big screen, she’s played Charlotte in THE TWILIGHT SAGA: BREAKING DAWN – PART 2. She’s present at both a Q&A session Fox holds for the Television Critics Association and at an affiliated party that evening. This interview contains quotes from both a one-on-one discussion at the party and from the panel.

ASSIGNMENT X: Emma has some very conflicted emotions about Joe when she finds out he’s alive, given that he didn’t contact her for over a year and has let her live with the misery of thinking he was dead. With Emma going through a re-evaluation, even if she comes to the old conclusions, is it fun playing that uncertainty or did you like her better when she was surer of her feelings?

VALORIE CURRY: You know, it was a really great challenge. It was challenging to play Emma lost and uncertain and struggling with some really intense, conflicting emotions. But I loved doing it and honestly, it pushed me to a darker, more vulnerable place than I’ve ever had to with Emma, which is wonderful. And on the other side of that, hopefully, there’s more power than what we’ve seen before.

AX: Given the high mortality rate among even regular characters on THE FOLLOWING, did you know you would be back for Season 2?

CURRY: I never count on surviving from one week to the next. I live in paranoia. But I knew when we had the finale for Season 1 that I had survived and I was given the indication that I was going to be around. I didn’t know in what capacity. And as always, I never know how long I’m going to last. But it was pretty clear that I was coming back for Season 2.

AX: What do you think is the key to the fascination much of the audience has with the homicidal characters on THE FOLLOWING, particularly Emma and Joe?

CURRY: I don’t know that I would necessarily say it for Joe, but [with Emma, Williamson] painted a character that still had a lot of vulnerability, that you saw how she was broken and why she fell victim to this mass manipulator. And there are some people who can absolutely sympathize with and see the victim in this girl. Some people absolutely can’t. She is very polarizing in that way. And I think that’s why people connect with her. At the same time, I think people are compelled to watch and love to hate her, because she undermines their expectations so much, because she looks so sweet. She looks so innocent. She can behave that way and convince you that she is that, and turn on a dime in the next moment, which is what makes her so fun to play.

AX: Do you have a favorite persona of Emma’s? Do you like her best when we’re seeing her as what we know as her “real” self, or when she’s playing a character?

CURRY: Well, frankly, none of them are not real. Everything she’s doing is real. There’s no lies and truth. It’s all truth – the truth just changes from one to the next. That said, there is a new character who’s introduced this season with whom she has a very particular kind of kinship, and I really enjoy playing scenes with that person.

AX: And … saying who that is would be a spoiler?

CURRY: We have lots of new characters this season, so you’re just going to have to wait and see [laughs].

AX: Emma has a lot of very different looks. Can you talk about all those changes in appearance?

CURRY: Yeah. I had a great time, especially with how simple Emma’s look is in Season 1. I was in and out of hair and makeup in twenty minutes. And the look that you see in Episode 1 of Season 2 took about three hours. And we got to play with a lot of extreme looks. It was really fascinating to me, because last season, with her simplicity, everything from the character was very much an inside-out process, and it was such a gift to have all of these external factors to deal with, to be able to physically put on the role and put on her very literal mask that she’s wearing this season.

AX: Do you have a favorite look for Emma?

CURRY: It would be really hard to pick one. I was a big fan of what you saw in the first episode [of Season 2], but I like all of her transformations, because all of them really embody this sort of strength that either she had or she needed to project or to help her [deal with] how broken she felt. I loved it all.

AX: Most people would find some of Emma’s actions are highly disturbing. Do you have trouble letting go at the end of the shooting day?

CURRY: I actually have a pretty easy time letting go, but I think that’s to do with the nature of the character. Emma, as opposed to Joe, doesn’t relish the violence. She’s not particularly bloodthirsty. Everything either comes from a place of love and devotion to him, or it’s just kind of callous and businesslike – “No, I have to kill this person. Okay. That’s fine.” She doesn’t have a lot of emotional attachment to it, no matter what sort of disturbing things are happening in front of her. So it’s not something that I can take with me, either, which probably speaks very poorly of me, I’m sure.

AX: Did you do any projects during the hiatus?

CURRY: Yes, interestingly enough. I did a film called AFTER DARKNESS with Kyra Sedgwick, Kevin Bacon’s [real-life] wife [laughs]. So now I’m like in some strange exponential territory in terms of Six Degrees of Kevin Bacon.

AX: You’re in the Bacon Zone.

AX: Is there anything else you’d like to say about THE FOLLOWING right now?

CURRY: I think we’ve raised the bar even higher on the quality of the production. It’s just tighter, faster – everything wonderful about the first season is amplified in the second and I’m really proud of it and I think that the audiences who loved the first season will be really excited to see where we take it.

Related: Exclusive Interview with THE FOLLOWING’s Sam Underwood on a killer Season 2