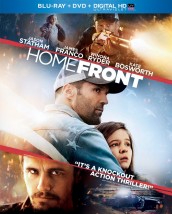 HOMEFRONT Highlights this week in Blu-ray, DVD and VOD Releases

Also reviewed: BEYOND OUTRAGE, IN FEAR and more 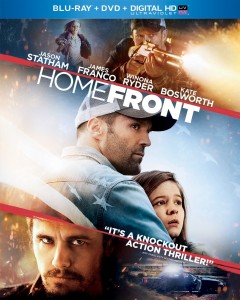 HOMEFRONT – When you see Jason Statham as the star of a new film you probably know what you are going to get from the start. A kick-ass dude that makes everyone else seem Busch league and is someone that you really should not mess with. Statham is also the king of the one word action movies. Look at his résumé: REDEMPTION, PARKER, SAFE, BLITZ, 13, CRANK, REVOLVER, TRANSPORTER. All of these are extremely similar films in that it has Statham kicking butt and trying to be a good guy by helping someone. HOMEFRONT is another of these films where Statham stars as a former DEA agent that moves to a small town after his last assignment went bad and tries to make a new life with his daughter. However, a chance encounter with a mother and father at his daughter’s school sets in motion a series of events that has the local meth dealer gunning to take him out.

Now, while Statham is pretty much playing all the other characters he has played before HOMEFRONT still works because all of his films are actually quite enjoyable. He’s got a great screen presence and his ability to do action works well because usually the bad guys are just so terrible of people that you cheer for him. Obviously, if you are a fan of Statham you will enjoy this but if you like action movies it will also be one to check out. 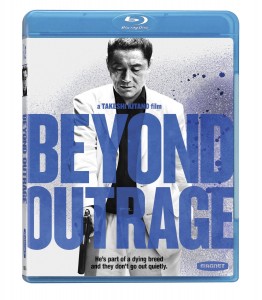 BEYOND OUTRAGE – I’ve been a huge fan of Takeshi Kitano since I first saw BATTLE ROYAL. Since that time I have been following his works as both an actor and director. Three years ago OUTRAGE came out and it was a new look at the business end of the Japanese Yakuza (as well as the brutality). BEYOND OUTRAGE is the follow up to that 2010 movie again featuring Kitano as Otomo, a disgraced yakuza member that sits in a jail cell wanting to return to a normal life after being arrested from his war on yakuza in the first film. But during his time in the big house, an over ambitious police detective as pit two rival yakuza gangs against one another. Otomo teams up with an old enemy to take down one of the houses of Yakuza in order to bring order back to the crime syndicate and what follows is a brutal exchange of bullets, blood, bodies and backroom dealings that put everyone at risk. Kitano, who directed the film as well, makes no bones about the fact that no one in this movie is a good guy. Everyone is out for themselves and money and power, nothing else matters and they are willing to do anything to get it – even the police. Recommended to anyone liking dark crime and police flicks. 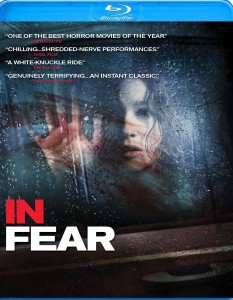 IN FEAR – A very tense, atmospheric horror flick about a not-really-a-couple traveling to a remote hotel to stay at after a festival when they realize that someone has misplaced the signs for the hotel and has them driving in circles. After some really poor decisions, they understand that someone is just f**king with them to see just how far they need to be scared to turn to violence. There are far too few movies these days that even try to go for a tense sense of dread but IN FEAR as it in spades and that is what really makes it enjoyable. You know something bad is coming but when, how and where is not known. This is a British import and proves that some of the best horror films are coming not from Hollywood but from overseas which is taking chances on new, original ideas. If you want a goretastic film, this isn’t for you, but if you enjoy a nail-biting trip, definitely check it out.