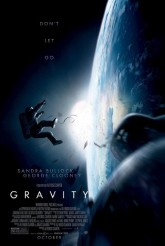 Just when you think that Hollywood has run out of ideas and everything is a remake or a retelling or a sequel or adaptation … OK, that’s actually the truth. That is what Hollywood has become.

But every so often a gem sneaks through all the crap and blows you away with how good Hollywood can actually be. GRAVITY lives up to all the hype that it has been given in so many ways. The sheer scale of this film is pretty unbelievable as it serves up some of the greatest computer graphics space scenes maybe to date.

While the science fiction aspects are pretty amazing (if not unlikely), GRAVITY at its heart is an action escape movie. Ryan Stone (Sandra Bullock) plays a specialist brought from Earth to fix the Hubble Telescope. But when a Russian satellite is destroyed, it starts a domino like destruction of neighboring satellites and the debris is headed right for her space shuttle. Soon the debris destroys the shuttle (and the poor Hubble) and Stone is sent flying off tether into the void.

Luckily, one of the other astronauts, Matt Kowalski (George Clooney), was using a space explorer suit and rescues her but after discovering their exit to Earth has been cut off. They make their way for the International Space Station with the debris field once again closing in for a second pass.

The action comes in big doses. When something goes bad, it goes bad for a good deal of time. It ratchets up the tension and the quiet moments are only a small relief as you know something is just around the corner to threaten Stone and her unlikely escape attempt.

Alfonso Cuarón directed GRAVITY and keeps his signature long shots with the camera rarely cutting from the action or movement of the actors. This worked extremely well on Cuarón’s other major title CHILDREN OF MEN and it works here. The all-in-one opening scene of the shuttle exploding and Stone set adrift is an amazing spectacle of cinematography.

While the plot is razor thin and the acting between Clooney and Bullock could have been easily completed by any number of actors. That’s not really why you are here. You are here for the special effects, the tension and seeing space go batsh** crazy in an hour and a half.

One of the few negatives is that more than likely most of us won’t have the television set to see this film as it should be seen. Blu-ray is a must here. Anything less than high definition just doesn’t make sense. It is times like these that I wish I had invested in one of those ginormous flat screens a year ago.

Go for the special effects, stay for the nearly two-hour long nine-part documentary on the entire making of GRAVITY on the special features. If you ever needed a clinic on how to make a movie, this is it. There are also individual scene breakdowns, an alternate take on one of the important scenes in the movie and a real documentary on the dangers of space junk. Pretty neat set of features for this great video.