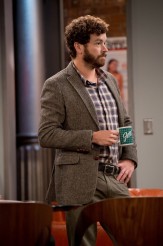 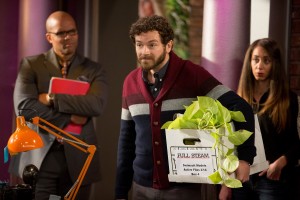 Actor Breckin Meyer, currently starring in TNT’s lawyer buddy comedy FRANKLIN & BASH, created MEN AT WORK based on himself and his friends. The half-hour series is now in its third season on TBS, Wednesdays at 10 PM.

Danny Masterson (of THAT ‘70S SHOW), who plays Milo, Meyer’s fictionalized alter ego in the series, happens to be a real-life friend of Meyer’s, so he came into WORK with an idea of the tone and the pace.

Both Meyer and Masterson are present during a MEN AT WORK set visit sponsored by TBS for the Television Critics Association. They stand in the set for the outer office of Full Steam Magazine, where Milo and his pals – Neal (Adam Busch), Tyler (Michael Cassidy) and Gibbs (James Lesure) – are all employed. The show’s creator and his star talk about working and playing together.

DANNY MASTERSON: He [Meyer] asked me to do it, and I just happened to be out of my old contract. I had done two shows for Comedy Central, each for a year, and then they got picked up and recast it, and then we did another one and waited a year, and they wanted to make a third one, and I said no, because I was two years with my thumb up my ass, and literally, on Friday I said no, and on Monday Breckin called and said, “Hey, do you want to do my show?” I said, “Let’s talk about it. You promise to shoot in Hollywood?” [laughs] The east side. [MEN AT WORK shoots in Culver City.]

MASTERSON: No, no, I meant actual Hollywood.

MASTERSON: Exactly. I can walk to Gower Studios. I do walk there. And literally, that was it. And I was secretly going off to get married in two weeks. And so basically, it was like, “I’m in, because I like this, we’ll work this stuff out, but I’ve got to shoot for two weeks and then I’m gone for a month.” And he said, “Oh, sh*t. Okay.” And seven days later, we shot the pilot. And that night, we shot on a Sunday night – Monday morning, I flew toIreland to get married.

MEYER: It’s been pretty smooth in that way. I mean, honestly, probably, if we had more time to worry about it, it might have been not as smooth. But I wrote the show to make myself laugh. I didn’t write it with the intention of selling it. I just wrote this thing based on this breakup I had when I was nineteen that was just so comical, I thought, “I’ve got to put it down somewhere.”

MASTERSON: I know the girl.

MEYER: He knows the girl [laughs]. And so I wrote it and literally, I was working on FRANKLIN & BASH and I gave it to TBS and it was that smooth. They said, “Great, let’s make a pilot” and I called Danny and then we made the pilot and got picked up pretty quickly after that, and then we were in the first season. By the time we finished the first season, we were picked up for the second, and it’s just kind of run that way. And the only thing that really gets in the way occasionally is my FRANKLIN & BASH schedule –

MASTERSON: We’d like to do [MEN AT WORK] Season 4 right now, because we have the crew, we have the sets – it’s cheaper to keep going [than break for hiatus]. We have great writers right now.

MEYER: We have stories to tell. I’ve got to go pretend to be a lawyer [laughs], I’ve got to go shirtless on the beach, so we have to shut down for a little bit.

AX: Your friends who knew you when you were going through the period referenced in MEN AT WORK, apart from Danny Masterson, do they say, “I didn’t realize your breakup was that funny,” or “I remember it being much funnier”?

MEYER: No, they’re the guys who were in the bathroom, pulling me out of the bathtub. They’re well aware of it.

AX: Were you seriously suicidal, or just wet?

MEYER: No, it was very similar to what you see. It is just kind of, in a shame spiral, staring at your reflection in the spigot, wondering what’s it all about and boy, I look weird in this reflection. And that was it. When you’re eighteen, when you’re nineteen, it seems like the end of the world, but looking back at it now, I’m like, “You’re just fine.” A little heartache.

AX: Does MEN AT WORK ever shoot outside this soundstage?

MEYER: We’ve done a couple exteriors, which is always fun. We’ve done one with Gibbs and a girl in the street during the “Molly” episode, which was really fun. But I’m happy in our world. As I said, I’m a creature of habit, so this is similar to how I like to live my life. I go to the same places every day and eat the same breakfast every day, so I don’t think we’ve told all the tales I want to tell in here yet before we go outside.

AX: You’ve said people are quoting some of the lines from the show on Twitter …

MEYER: From the premiere, “old gray d*ck” whenTyler thought he was getting old because he found his first gray hair. I can’t think of all the others.

MASTERSON: On my Twitter feed, I get “Fozzie Bear” a lot, because of Seth Green.

MEYER: Yeah, Seth Green named him that – deranged homeless guy. And then one I hear a lot is, Gibbs had a line – “Free coffee is the only reason people have jobs. Now I’ve got to go to Starbucks like an animal.” And I hear that line a lot. But knock on wood, there have been a bunch of them. But this season, we’ll see what [it] brings.

MEYER: I have a pilot at NBC that I hope goes – it would be really fun.

AX: Can you say what it’s about?

MEYER: It’s also ripped from my real life as well [laughs]. It’s about a dinner I have every Thursday for the last six-and-a-half years with the same group of guys. I only know one thing [laughs].

MASTERSON: It’s a good trick, though.

MEYER: It is a good trick. But this [MEN AT WORK] is my passion project right now, which is fun.

AX: Anything else you’d like to say about MEN AT WORK?

MEYER: I think if people see it, they’ll enjoy it.