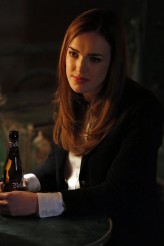 The actress talks about her character's dramatic near-death experience 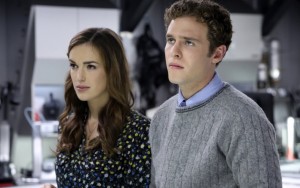 While everyone has had big moments on the show created by Joss Whedon & Jed Whedon & Maurissa Tancharoen, so far the episode “F.Z.Z.T.” has provided the most drama for Henstridge’s Simmons. Infected with a lethal alien virus, Simmons jumps off the team’s plane while it’s in flight, preferring to die alone than risk her comrades becoming ill and/or incinerated by S.H.I.E.L.D.’s antiviral protocols. She is saved when Agent Ward (Brett Dalton) intercepts her fall midair, cure in hand.

At a party thrown by ABC for the Television Critics Association, we catch up with the young British actress to ask about her character’s giant leap.

AX: What do you think was going through Simmons’ mind when she jumped off the airplane?

AX: Was that a very exciting, challenging scene to do?

HENSTRIDGE: Yeah, definitely. It was the first time really that we broke that kind of emotional boundary of, “Things are getting real,” and it was a very emotional episode on a relationship level for everyone in the team, and so it was lovely, because you got to see different sides of every character and how they reacted in a situation where it was life and death for one of their team and whether they could save her or not. So it was a great honor to be able to go there as an actor and then it was nice to see how all the team reacted to it. It came in a great place in filming for us, because it was the right time to have something like that. We got to know the characters; hopefully the audience was starting to care about them. You can’t do an episode like that too near the beginning, because people don’t care enough – they don’t know the characters, they’re not invested. Whereas by Episode Six, people were invested.

AX: In shooting that scene where you’re on the ramp in what is meant to be midair, did they have you up on a deck with fans blowing? How did they shoot that?

HENSTRIDGE: They shot it in a lot of different pieces. The jumping off the plane was on wires that went to crash mats, and then we had a lot of wire stunts for the falling through the air, and then we had body scans, and then obviously we did a take where I jumped out of an airplane for them just to have that. The stunt coordinators on this show and the special effects are insane. When you’re filming stuff like that, you can’t imagine how it’s going to look real, and then when you see the final product, somehow they make it look real.

AX: Was shooting any of that scary for you?

HENSTRIDGE: Yeah, definitely. It was challenging. You have to put your trust in the people that wire you up and you go in a big air hangar and you’re wired to the rafters and you just have to hope that they know what they’re doing, and they do, and they’re very great. They made me feel very safe, but it was certainly challenging.

AX: When you were first cast as Simmons, did you realize she that prone to getting crushes on handsome men? 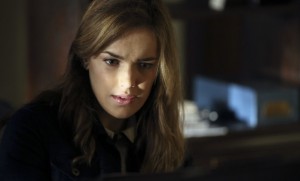 HENSTRIDGE: [laughs] For me to get crushes on other people?

AX: She seems to have a crush on Ward, and she appeared to be excited about Mike Peterson, played by J. August Richards, when she was running tests on him in the lab …

HENSTRIDGE: Oh, that’s interesting. One thing that Joss [and Henstridge have] spoken about is that she’s not just this kind of straitlaced [scientist] – she’s a woman and she fancies people and so it’s an interesting dynamic. I think that’s a normal reaction – a handsome-looking man comes into the lab, she’s going to have a quick peek.

HENSTRIDGE: Not that I can speak about yet.

AX: And is there anything else you’d like to say about AGENTS OF SHIELD right now?