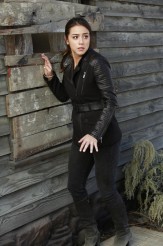 We learn that Coulson died and was brought back to life, but we already knew that 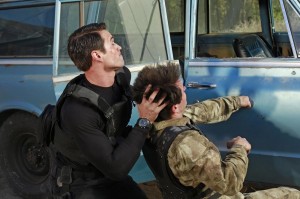 Show of hands. How many actually thought that something bad happened to Agent Coulson (Clark Gregg) on this week’s AGENTS OF SHIELD episode and S.H.I.E.L.D. was covering up exactly what happened?

Yeah, pretty much everyone. So when we were promised in “The Magical Place” that we would get the big reveal about what went down, I think everyone was expecting to learn just what happened and how he came back from the dead. What we learned? Coulson was brought back from the dead. Yep, that’s it.

Not why or how or whatever. Just that he was dead for a very long time – not the 8 minutes they told him or whatever – and that at the command of General Fury was brought back to life. We get it that Fury has a soft spot for him but why not let him die the noble death that he had in THE AVENGERS? Guess we will have to wait to find that one out.

Most of “The Magical Place” – which turned out not to be Tahiti but just a memory implanted in Coulson so he wouldn’t remember the horrors of being brought back to life – was focused on MARVEL’S AGENTS OF SHIELD trying to find Coulson. Only toward the end of the episode did we get any real information about what happened to him, all of which we obviously had guessed prior to having it spelled out in our face in this episode.

Yeah, I don’t get it. Why even have this episode? We knew all of this or at least had an inclination about it prior to getting slapped about the head as to what happened. They could have taken the pretty-much only long running subplot on the show in any number of directions. They got an alien to bring him back. Some sort of feedback from the Loki device caused him to be reborn. Doctor Strange was brought in and fished his soul out from hell having to fight the dread Dormammu and only escaped himself with the Eye of Agamotto (this would be a great way to launch a movie with Strange). Thor discovered the Coulson’s soul was actually sent to Asgard and he had to convince his father, Odin, to release it back to his body. He’s a clone as part of a new S.H.I.E.L.D. program to ensure they win the war against their enemies.

Anything is better than zombie Coulson. Wow, he was dead and they used some fancy machine to bring him back. Yeah, that’s really interesting. Wait, no it isn’t. It completely destroys any interest in this subplot and this being the only subplot that was worth a damn on this show is a terrible thing.

Now, this episode wasn’t a total wash. I am enjoying Victoria Hand (played by the lovely Saffron Burrows) and am interested to see where it goes with her being one of the major players in S.H.I.E.L.D. If the storyline follows along the comics (which with this show is doubtful), she will end up being someone that is eager to play both sides of the power struggle of the world and will go along with the bad guys if it furthers her own place in the world. Hopefully, they won’t ruin it and make her just milquetoast and boring. I also enjoyed Sky’s (Chloe Bennett) black leather outfit.

Meanwhile, can we please get some real heroes and/or villains in this damn Marvel show?