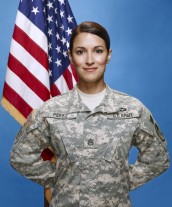 The actress talks playing soldier in the new comedy series 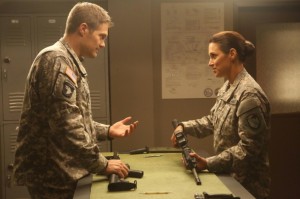 In Fox’s new half-hour comedy ENLISTED, Fridays at 9:30 PM, Angelique Cabral’s Jill Perez is the most capable soldier at the Rear D U.S. Army base in Florida. Her fellows are largely unorthodox and confused, the exception being Pete Hill (Geoff Stults), who has just been sent here after serving overseas and views his new posting as punishment. It doesn’t take long for Jill and Pete to clash.

Cabral, originally from Honolulu, Hawaii, has appeared in the films VAIKOONT, THE PERFECT FAMILY and FRIENDS WITH BENEFITS, as well as a number of television series, but ENLISTED is her first gig as a series regular. At a party thrown by Fox for the Television Critics Association, the actress talks about playing her can-do character.

ASSIGNMENT X: Jill seems to be the most confident soldier on the base, apart from maybe Keith David’s officer in charge Cody Wallace.

ANGELIQUE CABRAL: That is true.

AX: How does it feel to be the badass of the bunch?

CABRAL: It feels amazing. I have to be honest with you – it’s a dream role and what drew me to that part and to the show is that she is so hardcore and competent and competitive and awesome, that I understand her drive and her need to succeed.

AX: Did you get to do any physical and/or military-type training before shooting the pilot?

CABRAL: You know what? I hired a trainer and he made me do the Ranger workout, so I was very, very committed to that. I wanted to be strong and able to hold my own amongst all these men, and be a believable sergeant, and then we also had Army experts on set at all times. So yeah, we had a fair amount.

AX: Geoff Stults’ character Pete Hill is unhappy about being stuck in this Stateside unit. How does Jill feel about being with …

AX: It looks like there may be a bit of romantic tension between Jill and Pete …

CABRAL: I know. Yes. I believe that’s what they’re going to be writing in – I don’t know, but Geoff and I have chemistry, so it’s really fun. I won’t lie. It would be fun.

CABRAL: He’s my boss, he’s our sergeant major, and I suck up to him a lot, and I’m therefore his favorite [laughs]. And he says that in many of our scripts, like, “She’s my favorite, she’s my favorite.” Because I’m always there – I’m his little minion. Basically, Jill wants to be him when she grows up.

AX: Have you played minions before?

CABRAL: [laughs] One of my first plays ever was WIZARD OF OZ – I was a Munchkin, when I was really super, super little. But no, not in a while. I usually play the stronger women now.

CABRAL: As of now, I just got married, so that was my project. I’m in the middle of writing, working on a couple of ideas for scripts and pilots, so that’s in the works.

AX: Is there anything else you’d like to say about ENLISTED?