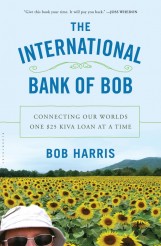 What better way to start the new year than with adventure and helping others? Bob Harris combines both in THE INTERNATIONAL BANK OF BOB: CONNECTING OUR WORLDS ONE $25 KIVA LOAN AT A TIME. The nonfiction book discusses both the phenomenon of micro-lending – individuals giving small sums so that people in impoverished countries can start their own businesses – and Harris’ personal experiences with it, which took him to all corners of the globe.

Harris previously authored PRISONER OF TREBEKISTAN: A DECADE IN JEOPARDY!, which both chronicled Harris’ stints on the game show and examining how and why people learn, and WHO HATES WHOM: WELL-ARMED FANATICS, INTRACTABLE CONFLICTS, AND VARIOUS THINGS BLOWING UP IN A WOEFULLY IMCOMPLETE GUIDE.

ASSIGNMENT X recently spoke with Harris at the Paley Center premiere of Season 3 of HUSBANDS: THE SERIES (he’s a friend of the show).  Here’s what he had to say about THE INTERNATIONAL BANK OF BOB.

ASSIGNMENT X: How did you come to write this book?

BOB HARRIS: I used to be a travel writer. I grew up working class, but made friends with the right editor, and next thing you know, I’m sitting at these luxury resorts in Singapore and Dubai. So I lucked into a job in 2008 working for Forbes Traveler, visiting these five-star billion-dollar hotels, but then tend to be built in a lot of parts of the world by workers who are getting paid next to nothing and are never going to see the insides of these things, and I just couldn’t rationalize staying in these palaces being built by guys who’d never see the insides of them. So I wanted to do something with my good fortune that would do good for the world.

That was shortly after micro-lending had won a Nobel Peace Prize, the pioneers of it, Muhammad Yunus and the Grameen Bank, so I made a bunch of loans with all of my travel money, the Forbes money, through Kiva.org – Keep Investing Vigorously Always, that’s not what it actually stands for, but in a pinch – this wonderful charity, and then traveled to Bosnia, Rwanda, Cambodia, Lebanon, Peru, countries all over the world, to meet the actual clients that I’d lent to, and see whether it really had an effect in the field.

And it was one of the greatest series of experiences I could possibly ask for, because beyond just seeing people not just receiving charity, but really building economies, building lives, creating jobs, businesses, feeding their kids, in this kind of reproduceable way. It was also wonderful – nobody I met knew that I’d let money. I didn’t show up as, “Hi, I’m a rich guy who put twenty-five dollars into you buying that cow.” I showed up just as an American writer who was interested in their lives. Everywhere I went, one hundred percent of the time, I was not only welcomed with open arms, but I was just treated exactly the way you’d hope to be treated in places like Beirut and Sarajevo and places I wasn’t too sure that an American just showing up by himself would necessarily get welcomed. And what the book evolves into is more than just a study of micro-finance. Just inevitably, as people come along on the ride, hopefully they start to feel this sense of welcome and sameness and connection and – eventually, it began to feel like language and ethnicity and culture were like a coat of paint that we all wear, and you can scratch it off with a fingernail, and right underneath, it’s just people who love their kids everywhere. And that’s what the book’s about.

We’re very excited about it. There’s even talk of television adaptation. I can’t really give you any details, but there’s a major network that’s interested, and there are a lot of interesting things coming out of it.