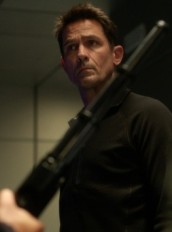 A smart, slick science fiction series that has a lot going for it 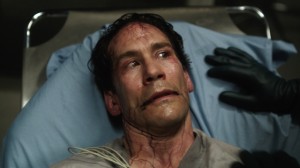 SyFy is back in the science business of science fiction with HELIX, a new series on the network with the backing of BATTLESTAR GALACTICA creator Ronald D. Moore.

HELIX is a slick show. From the get-go, you can see the amount of money they spent bringing such a series to television with high production values, decent special effects and an interesting script that by the end of the “Pilot” episode gets you hooked.

The show centers on an Arctic research facility off-the-grid from the world and allowed to conduct science experiments that may not be exactly legal in the eyes of the world. But when something goes wrong and three of the scientists get exposed to a mysterious virus, the Center for Disease Control (CDC) is called in to figure out how bad the virus is and how best to contain it.

There is quite a level of depth here that this summery paragraph doesn’t even begin to get into. First, one of the infected scientists is the brother of one of the CDC doctors, Alan Farragut (Billy Campbell), sent to the frozen science complex and one of Farragut’s assistants is his ex-wife who slept with his brother. Already knee-deep in drama. The director of the facility Dr. Hatake (Hiroyuki Sanada) is not only obviously hiding much of the need-to-know information, he also is secretly working with the military to deliver something to them. The virus itself is nasty bit of business that devours the human body and turns it to black goo, except for Farragut’s brother who is only getting stronger.

Call HELIX a modern day television version of OUTBREAK except in the arctic where the CDC is racing to contain a deadly virus that if exposed to humanity, might be the global plague that does us all in. But what makes this show interesting is that we don’t have, well, any answers at all. That’s good for now because this is a starting point and it hooks you in wanting to know how they got infected, what this was being used for (beyond Hatake saying it had to do with mutagens), what this white room they keep referring to is, what is being covered up, what the military wants from the complex and more.

After a long run with SyFy going the way of vampires, werewolves, ghosts, monsters and other supernatural creatures, nice to see a series that goes back to good old fashioned science fiction. Also has a huge fan of the film THE ANDROMEDA STRAIN smart science fiction with good pacing, plot and acting is hard to come by. Hopefully HELIX will continue to impress.