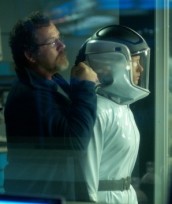 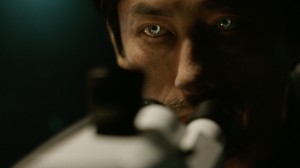 HELIX furthered the depth of where this series is going with “Vector,” where a group of scientists get infected by Peter Farragut (Neil Napier) who is still running amok in the facility after escaping in the first episode.

While the second episode focused mainly on finding the infected scientists, treating the scientists and above all else how and why Peter infected them, there was plenty of new questions that emerged that we, obviously, have no answers. The biggest of which might be why Dr. Hatake (Hiroyuki Sanada) has an unhealthy obsession with Dr. Walker (Kyra Zagorsky) and why he has silver eyes and is covering it up by wearing normal-eyes contact lenses?

Also, why does Dr. Jordan (Jordan Hayes) have the shakes? At first it seemed it was the result of her getting held at needlepoint by the infected scientists who wanted out of their containment and she was just shaken up. However, it happened again later when nothing was going on leading to believe something else is wrong with her. Then there is Balleseros (Mark Ghanime) the supposed military liaison with the CDC but who obviously has ties with Hatake and seems to be working for a shadow organization wanting whatever they are doing in the facility. He also isn’t the naïve, desk jockey that hasn’t fired a gun since basic training as it took little to no time for him to knife a scientist looking to escape.

Speaking Walker, why did Peter confront Dr. Jordan about why they were there and mention “Walker’? Obviously, he has ties to her as he had an affair with her while she was married to his brother, Alan Farragut (Billy Campbell) but was there more to it? Was she specifically there for another purpose and that’s why Hatake has a weird photobook of her in his personal library? Or was it just a prelude to what we would see at the end as Peter Farragut infects Walker with the poison kiss – which is how the virus is transmitted as we found out during the experiment Walker does with the rats and from the testimony of the infected scientists.

So the virus isn’t airborne but transmitted from emitting black liquid into the mouth of another and that the carrier wants to infect others as part of its nature. But what else we learned from the rat experiment is that those given the weird drug Narvik A died shortly after and turned to goo while those given Narvik B lived but experienced hyper aggression and a tendency to infect others. Was Farragut and the others who were initially infected given these drugs on purpose? Obviously Farragut go Narvik B but did the others get Narvik A and why they turned to black goo? Did they do it to themselves? Hatake’s calm approach to seeing an infected Farragut and offering some water-type substance in the opening scenes of the “Pilot” episode seem to point that they were indeed infected purposefully.

Now things are heating up. Not only is Farragut still roaming around infecting people, the three infected scientists break out of the holding facility and are roaming about as well. It can only get worse from here and so far it has been a fun ride.