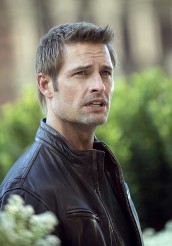 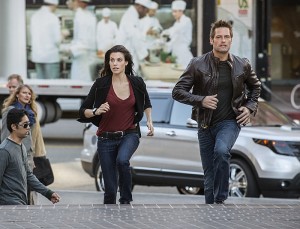 In CBS’s new series INTELLIGENCE, Mondays at 10 PM, Josh Holloway playsU.S. government agent Gabriel Vaughn, who has a computer chip in his head that allows him to both access computers all over the world and virtually walk through “computer render” scenes of events that have happened. Because of this, Gabriel is a valuable asset requiring protection, much to his annoyance. His bodyguard is agent Riley Neal (Meghan Ory), while the scientist responsible for the tech in Gabriel’s head is Dr. Shenandoah Cassidy (John Billingsley). All of them report to project director Lillian Strand (Marg Helgenberger).

INTELLIGENCE creator Michael Seitzman, whose screenwriting credits include HERE ON EARTH and NORTH COUNTRY, is with fellow INTELLIGENCE executive producer Barry Schindel (UNFORGETTABLE, CASTLE, NUMB3RS) at a cocktail party CBS and the CW are throwing for their creative teams and the Television Critics Association. Unlike their hero, who is tight-lipped about his missions even under torture, all is takes is some polite questions to get the two men to talk about putting together their science-fiction/action/spy drama.

AX: How did you come up with the premise for INTELLIGENCE?

MICHAEL SEITZMAN: We started with a book, which was called PHOENIX ISLAND [by John Dixon], which dealt a lot with augmented humanity – microchips in human bodies – and we just took off from there. We just decided we wanted to tell a story about a modern-day Six Million DollarMan. Instead of super-strength, we wanted it to be super-intelligence. In an era where there’s more power in the smartphone in your pocket than there was on the Lunar Lander, what’s the most important power that we have? It’s the ability to gather information. So that was what we wanted. And we wanted it to feel like it wasn’t science-future, that it was science-now – five minutes into the future, not fifty years.

BARRY SCHINDEL: I wasn’t there for the development of it – I came from Episode One, so –

SEITZMAN: He was as vital to the development as any of us.

AX: When you came up with the very basic premise of, government agent with technology in his head, how did you figure out, “Okay, we need to have the chip – what do we need around it”?

SEITZMAN: We wanted our character to have a super-power and then the actual next step is, what do you do with a super-power? You save the world. So we sort of looked at, where would that story be seated? You put it in the one agency that didn’t exist during the Cold War, the one agency that deals with technology and nothing but technology, and that’s U.S. Cyber Command, which is a real agency, a part of the NSA. So we made our own fictionalized version of it.

AX: It was interesting that you begin with the mystery of where Gabriel’s wife is in the first episode, and by the second episode, we’ve found her, we have the mystery of why she was working with terrorists, she kills herself and then we find out she was really one of the good guys. Did you think about making that storyline go longer, or …

SEITZMAN: We thought about it. We just thought, “You know what? Let’s surprise the audience, let’s give them something they’re not expecting, as opposed to what they’re expecting, and let’s try to create a character arc so that he can not spend every week looking for his wife, but can spend every week doing the thing that we need him in the show to do, which is save the world every week.” So it was a two-pronged attack – surprise the audience and free the character.

SCHINDEL: The quote-unquote “relationship” in the show is Gabriel and Riley, so having a guy that’s perseverating over his dead wife we thought would be a good idea.

AX: Meghan Ory, who plays Riley, is fairly petite. Was that something you were deliberately looking for in Gabriel’s protector, as a contrast to his height?

SEITZMAN: We were consciously looking for somebody who could both be a romantic interest and maybe a little sister, somebody you could feel like you would recognize certain archetypes in her, but also somebody who could be formidable. So we saw a tape of Meghan in ONCE UPON A TIME as Ruby/Red Riding Hood. We had already read about eight hundred women for the role. And Meghan just caught our attention. We just loved her. She had a lot of strength, she was beautiful and she has a girl-next-door kind of innocence to her that we really liked. And she’s also got a bit of a wry sense of humor that we really liked. So she seemed to have every element that we wanted the character to have. And then we just needed to figure out how to get her on the show. We were only about four days away from shooting, so Meghan, in a tremendous feat of courage, made the table read her audition. She came to the table read with our whole cast, who had already been cast, and she sat down and she read the role. And everyone, including the network and the studio, said she knocked it out of the park.

AX: What about the casting of Josh Holloway?

SEITZMAN: Josh is the big miracle of our show. [Fellow executive producers] Tripp Vinson and Dave Semel and I met with Josh when we first started all this. He had been sought after by maybe, I don’t know, fifteen other shows. Somehow, he chose ours. He cast us more than we cast Josh. We were looking for a character who is eminently human. And we have a character who has a chip in his brain. But we want the show to be about a human, not about a robot. So we wanted an actor who, no matter what he’s playing, is eminently human. One thing you see in Josh’s work, [Holloway’s LOST character] Sawyer being the most well-known, is even when Sawyer was at his worst, you couldn’t help but love Josh, and that’s because in Josh’s eyes is this incredible humanity and sense of humor and things that other people don’t have. And so to us, he was just logical. What we didn’t expect was that everybody else was seeking him very vigorously at the same time.

AX: And how did you talk Marg Helgenberger, who has spent twelve years solving crimes on CSI, to come back and solve more crimes on your show?

SEITZMAN: I don’t know how we did that. We must have been very charming that day. 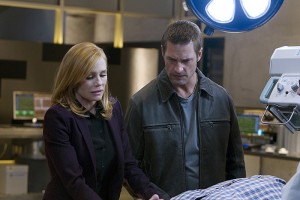 SCHINDEL: She’s tremendous in the show.

AX: Can you talk about John Billingsley and PJ Byrne as father-and-son scientists Dr. Shenendoah Cassidy and Dr. Nelson Cassidy?

SEITZMAN: We were looking to fill out a family. Father, mother, children. Marg became our mother character, John became our father character. We needed somebody to play with John every week. We saw right away that PJ was funny, he was wry, he was delightful, and we thought he had a little bit of mischief in his eyes. So PJ was a natural. But John just projects a lot of intelligence that we needed. He also has this kind of rumpled, avuncular quality that we wanted in the role, and so he was perfect in that regard. And the two of them, they look like father and son. So the two of them as father and son were perfectly matched.

AX: John Billingsley is actually a CHUCK-in-law. His real-life wife is Bonita Friedericy, who played General Beckman on CHUCK, which was the 2007-2012 NBC comedy/action series about a man who had a versatile government computer program downloaded into his brain. Were you at all aware of CHUCK during your development process?

SEITZMAN: No, not until the show’s fans made us aware. As I said yesterday, we’re deeply impressed by the passion of the CHUCK fans, and we want to win them over.

We actually just found out [about the Billingsley-Friedericy connection] recently. We brought [Friedericy] in to play a role in the two-part finale. She was really great, and only then did we find out she had been on CHUCK.

SCHINDEL: We are happy to invite any CHUCK fan who is still reminiscing about CHUCK to come over to INTELLIGENCE.

AX: Does the premise of INTELLIGENCE allow you to use any ideas that you’ve had for awhile and never found a home for before?

SEITZMAN: Not really. I’m not a great resurrecter of things. You think you’re going to be able to fit [an old idea in]; it never really does. You’re always looking for something fresh. There was one idea somewhere in there that came from an old script. But other than that, we have to start fresh every day.

AX: Is there anything that’s particularly difficult in producing INTELLIGENCE?

SEITZMAN: Yeah. Making the cyber-render is hard. The frozen environment is difficult. It’s grueling for the cast, it’s very challenging, technologically speaking. It’s just hard. So we figured it out – it took a little while to figure out the methodology. But once we did, it’s going a little more smoothly. But it is a challenge. It’s a fun challenge, a wonderful challenge, but a challenge nonetheless.

AX: Is there anything else you’d like to say about INTELLIGENCE right now?

SEITZMAN: Just that it’s the best fun I’ve ever had in my career. I hope to get to keep doing it.