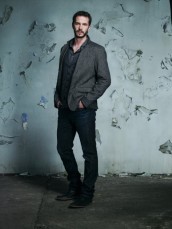 ©2014 A&E
James D'Arcy in THOSE WHO KILL
Interviews 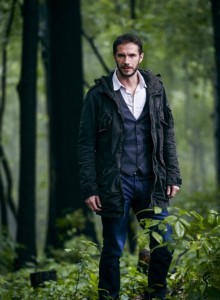 In A&E’s new drama THOSE WHO KILL, Mondays at 10 PM, James D’Arcy plays troubled (and sometimes troubling) forensic psychologist Dr. Thomas Schaeffer. Schaeffer hasn’t worked with the police for awhile, for reasons that are hinted at in the pilot, but he’s drawn back in when newly-promoted homicide detective Catherine Jensen (Chloe Sevigny) demands that he help her out with a serial killer case.

THOSE WHO KILL is adapted by prolific writer/producer Glen Morgan from the Danish TV series DEN SOM DRAEBER, which was in turn adapted from a series of books by Elsebeth Egholm. THOSE WHO KILL is filmed inPittsburgh,PA, which has a snowy bleakness that, Morgan says, reflects the characters’ inner states.

Londonnative D’Arcy has a long resume of films and television, including multiple roles in Andy and Lana Wachowski’s CLOUD ATLAS, MASTER AND COMMANDER: THE FAR SIDE OF THE WORLD, Madonna’s W.E. (as Prince Edward), SECRET DIARY OF A CALL GIRL and HITCHCOCK (as Anthony Perkins). D’Arcy recently completed work on the Wachowskis’ upcoming feature JUPITER ASCENDING.

At a session A&E sponsors for the Television Critics Association, D’Arcy talks about playing a man who spends a lot of time staring into the darkness.

ASSIGNMENT X: Your character is in a lot of pain, which we see when he’s alone or with Jensen, but which he seems to conceal when he’s with his wife. Is it easier playing the open pain, or the surface calm with the pain underneath?

JAMES D’ARCY: I think as human beings, we all have complexities and layers. And I do think that, insomuch as there’s any art to being an actor, it’s that we observe that and are somehow hopefully able to recapture it again on film, so that an audience [will respond]. This is how I respond as an audience. I love to feel identification with the people that I’m watching. And I would say that most people that I know are not completely straightforward. I’m a British actor who trained in the theatre, so I’m pretty predisposed to ham it up, frankly – I’m predisposed to do some “schmacting.” And it’s good for me to have to keep a lid on it. And also, I think it’s probably quite real. I’ve always enjoyed watching projects where people are sometimes saying one thing but meaning something completely different and I am in on it as the audience and I’m able to invest in a way that perhaps I couldn’t [otherwise]. If people are just being entirely direct, it’s not always great drama. Although I do think that, between our [D’Arcy and Sevigny’s] two characters, we have each other’s number very well, because we both recognize in each other the same damage, and so we are able to communicate in a way that perhaps I’m not able to communicate with my wife in the show.

AX: The pilot asks a lot of questions about the psychological stability of both Schaeffer and Jensen …

D’ARCY: I think that’s exactly what the pilot is supposed to do, is leave you wondering what’s going to happen next to these two people. They’re both on the edge of something. I do feel, knowing what happens next, what makes it compelling is that they make decisions that really other people wouldn’t make. And you see it in the pilot. The pair of us do things that other people really wouldn’t do, and I think that will leave you off-balance and uncertain as to how they will deal with any given situation.

AX: Is it difficult doing such a demanding role with an American accent?

JAMES D’ARCY: I suppose the short answer to that question is, yeah, it’s pretty challenging, but the great news is, I was inAmerica. and I made the decision – based on, truthfully, stories I’d heard and friends I have who work on shows in America, playing Americans – that I was going to keep the accent up all day. So I did that for a week in preproduction, and then by the time we started shooting, actually, I kind of forgot that I was speaking in a foreign accent, and weirdly, by the end of the show, it was more peculiar speaking in my own voice than it was speaking in an American [accent] – like my mother would call, and I’d answer obviously as myself, and then when I would make a sound, I’d think, “I don’t think an Englishman sounds like that. I made a wrong noise.”

AX: Are you a fan of this genre as a viewer or as a reader?

D’ARCY: It’s not the kind of material that I as a viewer gravitate towards. As an actor, that’s the story – I look for good drama and an exciting situation. This isn’t a horror movie, but I don’t watch horror movies and I’ve made a ton of horror movies, so my feelings as a viewer are really immaterial when it comes to the work that I would be involved in.

AX: Do you ever think that you’re making this for an audience you don’t identify with, then, because this isn’t the sort of thing you gravitate towards?

D’ARCY: I think this is really powerful, challenging, exciting material. I think that the characters are genuinely fascinating, because they tread such a strange – well, not strange – a difficult moral line, and that’s exactly the kind of thing I would watch.

AX: Given the serious tone of the material, is there much humor on set when you’re shooting?

D’ARCY: Yeah. We made a decision that we were going to have fun doing the project. My experience is, actually working on a comedy is the thing that wakes you up at three o’clock in the morning, because it’s such a technical art. It really kills you. Particularly because on a [comedy] set, nobody can laugh. You know, you do the thing that’s supposed to be funny and the crew is silent, so you think you must have been terrible. Whereas, with a drama, and the more intense any drama is, my experience is that a kind of gallows humor comes into play and, in fact, the [set] becomes quite a light place. There are a lot of jokes that are cracked. And we went out of our way to make sure we found all the best restaurants inPittsburghand had great, fun nights out at the end of the day.

AX: Did Pittsburgh live up or down to your expectations of what the city would be like?

D’ARCY: I didn’t know anything aboutPittsburgh at all, so I was pretty open to whatever, and I’ve really fallen in love with that city. It’s pretty amazing. Very nice people, there’s some beautiful architecture, there’s always extraordinary bridges. Hopefully, we caught a lot of it on camera as well. I’m excited to sort of reintroduce it toAmerica.

AX: You worked on JUPITER ASCENDING …

D’ARCY: I’m a really small cog in that very big machine. We shot it in three-and-a-half months. I did it because I love Andy and Lana [Wachowski] and they’re friends, and it’s going to be an amazing film, but my contribution is relatively small.

AX: Is there anything else you’d like to say right now about THOSE WHO KILL?

D’ARCY: There is this kind of umbrella story that we start to get into in the pilot, but that becomes more and more as we go along. My real hope is that people find the mystery of the two characters to be the compelling thing that brings them back, week after week after week.